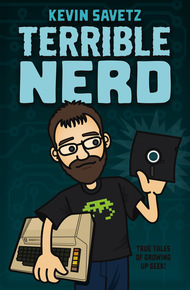 Kevin is co-host of ANTIC: The Atari 8-Bit Podcast, where he has conducted more than 150 interviews with pioneers of home computing. He is owner of Savetz Publishing, a web site publishing company, where he operates more than 100 useful little web sites of interest to consumers and small businesses. Kevin has written several books about the Internet, as well as more than 1,000 magazine and newspaper articles about technology. He lives in Portland, Oregon.

Terrible Nerd is tech journalist-turned-Web publisher Kevin Savetz' biography of personal computing, gaming, and online adventures as a child in the '80s, and follows the author as an Internet pioneer in the early '90s and into his present-day Web success.

Rich in detail, personal memories, and computer specs, this is the story of a boy coming of age in the dawn of home computing. This tech memoir gives readers a front-row seat to a geek's early experiences with computers, from his dad's beloved Atari 800, to an ill-gotten Texas Instruments 99/4A, to Kevin's first Apple //c in 1984. Accessible to non-techy readers and computer nerds alike, this treasure trove of memories shows how growing up as part of the first computer-native generation shaped friendships, hobbies, and, ultimately, a career.

Kevin recalls his brushes and friendships with computer greats, BBS gurus, and pioneers of the world wide web. He reminisces about text adventure games such as Zork and Hitchhiker's Guide to the Galaxy, and the early 8-bit era of M.U.L.E. and Jumpman. Terrible Nerd brings to life late nights experimenting with code in front of a glowing monitor, hacking the school computer to dial into BBSes, causing trouble on college radio, a stint as AOL's Internet AnswerMan, and hosting a team of Microsoft suits in his small-town home office. Whether he's begging TRS-80 time from a middle school librarian or lobbying his mom for a modem (stupid WarGames!), Kevin brings his experiences to life, writing with insightful candor and historical accuracy. While other guys were chasing girls, Kevin was typing in pages of code from computer magazines, swapping software, programming in BASIC, and scouring newsletters for clues to text adventures.

Terrible Nerd celebrates an era in all its geeky glory. You'll enjoy following along as Kevin flunks out of P.E. class, gets busted for reading the Intellivision game catalog at church, and accidentally crashes the Internet for all of Europe – yet ultimately triumphs and even gets the girl.

"A childhood of the '80s or '90s - for the nerds among us - often included all kinds of tinkering on computers, and Savetz's geeky autobiography reminisces about the 300 baud modems, type-in programs and nowadays shockingly primitive computing experiences of our youth." – Simon Carless

Soon, I would have a computer of my own, in my room. One which I could use every day instead of every other weekend. Unfortunately, the way I got it was not honorable. I stole it. I stole it in front of hundreds of people.

My mom worked as the office manager at a Catholic church. She started there when I was in kindergarten and worked there until after I graduated from college. She was a central part of the activity at St. Jude's, and everyone knew her. I was there a lot, too — hanging around her office and the rectory in the summer, on sick days from school, and so on. All the church people knew me. We went to mass every Sunday, and I went to CCD (religious education class) every Tuesday after school. (I must have missed the day they taught "thou shalt not steal.")

Every October, the church would have a big fundraiser called Octoberfest. Held in the parking lot, there were rides, games, carnival booths, a cake walk, and other family fun. A raffle always closed out the day. The raffle was a big moneymaker for the church's facility improvement projects, and raffle ticket sales started months before the Octoberfest carnival day. The staff and volunteers (including myself, sometimes) would mail thousands of envelopes containing raffle tickets to parishioners, who would hopefully mail back their signed raffle tickets plus a check. All of the purchased tickets would be thrown into a large spinning bin. It had mesh walls, so you could spin the bin and watch thousands of the paper tickets climb, fall, and tumble around and around.

By the time Octoberfest rolled around, the bin was stuffed with tickets. The prizes were pretty great: the grand prize was usually a trip to Hawaii. Although it varied from year to year, other prizes included things like a car, a vacation condo for a week, $500 cash, Walkman radios ... and in that particular October of 1982, a Texas Instruments 99/4A computer.

I wanted that computer. Well, no. I wanted an Atari of my own like at Dad's house, but failing that, I wanted any computer. The TI, with the colorful graphics on the box, seemed like a good alternative. I saw that box a lot in the weeks preceding the raffle — it was in the rectory, part of the stack of raffle prizes stored in Mom's office.