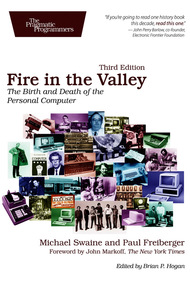 In the 1970s, while their contemporaries were protesting the computer as a tool of dehumanization and oppression, a motley collection of college dropouts, hippies, and electronics fanatics were engaged in something much more subversive. Obsessed with the idea of getting computer power into their own hands, they launched from their garages a hobbyist movement that grew into an industry, and ultimately a social and technological revolution. What they did was invent the personal computer: not just a new device, but a watershed in the relationship between man and machine. This is their story.

Fire in the Valley by Michael Swaine and Paul Freiberger

Fire in the Valley is the definitive history of the personal computer, drawn from interviews with the people who made it happen, written by two veteran computer writers who were there from the start. Working at InfoWorld in the early 1980s, Swaine and Freiberger daily rubbed elbows with people like Steve Jobs and Bill Gates when they were creating the personal computer revolution.

A rich story of colorful individuals, Fire in the Valley profiles these unlikely revolutionaries and entrepreneurs, such as Ed Roberts ofMITS, Lee Felsenstein at Processor Technology, and Jack Tramiel of Commodore, as well as Jobs and Gates in all the innocence of their formative years.

This completely revised and expanded third edition brings the story to its completion, chronicling the end of the personal computer revolution and the beginning of the post-PC era. It covers the departure from the stage of major players with the deaths of Steve Jobs and Douglas Engelbart and the retirements of Bill Gates and Steve Ballmer; the shift away from the PC to the cloud and portable devices; and what the end of the PC era means for issues such as personal freedom and power, and open source vs. proprietary software.

"Possibly the seminal history of the PC, and the basis for the '90s 'Jobs vs. Gates' TV movie Pirates Of Silicon Valley, this book starts at Babbage and spans all the way to 2014, but is most special on the genesis of Apple, the IBM PC, the Macintosh, and the personal computing revolution." – Simon Carless

In the late 1960s, just outside Seattle, a group of teenagers met after school each day to go to work. They arrived just as C Cubed closed for the day and its real employees began heading home. The kids thought of themselves as the firm's unofficial night shift. They had unfettered access to the company's DEC minicomputer, and they made full use of it.

The two leaders of the group were obsessed with computers. None of them were getting paid, but Paul, a soft-spoken 15-year-old, would have paid for the chance to get his hands on that computer. Like his friend Bill, who was 13 and looked even younger, Paul desperately wanted a computer of his very own. This after-hours time with the DEC machine was the closest they could come to that for now.

Computer Center Corporation, which the boys called C Cubed, was more than happy to have them hack away on that computer. According to its contract with Digital Equipment Corporation (DEC), as long as C Cubed could show that DEC's programs had bugs, the firm didn't have to start paying for the computer. The kids were finding bugs and postponing the day when C Cubed would have to pay its bill.

DEC's arrangement with C Cubed was a common one at the time for tracking down subtle bugs in complex programs. The DEC software was new and intricate, so everyone knew it would have at least a few errors. But the kids discovered hundreds, and young Bill found more than anyone. The Problem Report Book, as the boys entitled their bug journal, grew and grew and grew, to 300 pages. Finally, DEC called a halt to the proceedings. As Bill later recalled, DEC told C Cubed, "These guys are going to find bugs forever."

Paul Allen and Bill Gates stayed on with C Cubed for months after the other boys lost interest, eventually getting paid for their work. They were privileged—and they knew it. Few teenagers at the time had ever seen, much less programmed, a computer.

Computers in the 1960s were massive. Even the smallest "minicomputers," the kind built by DEC, were refrigerator-sized. And computers were expensive. Only government agencies, universities, and big businesses could afford to own a computer. And they were obscure and sinister, typically operated by a white-coated "priesthood" of specially trained operators and programmers using this mysterious private language. In the 1960s computers were widely regarded as a dehumanizing tool of the bureaucracy, especially by the young.

But not by everyone. There were a few technically minded young people—the nerds, the math majors, the ones who ran the audio-visual equipment for their high schools—who were fascinated by computer technology. Kids like Paul and Bill. Hacking on the C Cubed machine to themselves those evenings, they dreamed of a day when they could actually own their own computers. "It's going to happen," Paul would tell Bill.

It did happen, of course. And more has happened than those gifted teenagers, or anyone else back then, could possibly have imagined. Essentially nonexistent before 1974, personal computers quickly became ubiquitous in offices, homes, laboratories, and schools, on airplanes, and at the beach. Computers came to sit on every desktop and ride in every briefcase. They replaced the typewriter, calculator, physical accounting system, spreadsheet, telephone, library, drafting board, theater, tutor, and toy. Connected to the Internet, they opened access to an instant postal system and a dazzling, worldwide array of information, entertainment, and commerce. The personal computer brought about a revolution.

And its very genesis was revolutionary, because the personal computer did not arise from expensive, well-equipped labs staffed by an army of research and development specialists. It began outside the corporate and academic establishment, built by hackers and hobbyists and seat-of-their-pants entrepreneurs like Bill Gates, Paul Allen, Lee Felsenstein, Alan Cooper, Steve Dompier, Gary Kildall, Gordon Eubanks, Steve Jobs, and Steve Wozniak working after hours in garages, basements, and bedrooms.

These revolutionaries fueled the revolution using their own fascination with this technology. Their story is as strange and remarkable as any in modern business. It is a tale of overnight millionaires bewildered by their sudden success, populist engineers holed up in garages soldering together machines that would change lives, manufacturers afflicted with consumerism, consumers who accepted buggy toys of limited capacity for the thrill of being part of a new thing, and a spirit of sharing hard-won technical insights—a spirit rare in any industry but essential for the creation of the personal computer.

Like any story, this one has an end. The fire of the revolution that the personal computer ignited continues to spread, but new technologies and devices are at the center of our new digital world. The personal computer—the box on your desk or lap that can you employ for all the infinite uses of a computer—is just one of many smart devices in your life, and probably not the most important of them. And the particular culture that created the personal computer—that mixture of '60s radicalism, entrepreneurship, and technical nerdiness, and that impossible yearning to own your own computer—that's history now.

This is the history of that culture and that revolution.