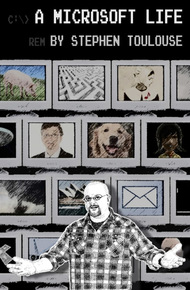 He has worked for more than 15 years at the Microsoft Corporation and loved every minute of it. If asked, he will loudly proclaim if Microsoft employees are likened to the borg, he's the happiest borg there ever was.

No third party web browsers were harmed in the making of this book.

A Microsoft Life by Stephen Toulouse

What is the Redmond Reality Distortion Field, and how does it work?

What did a pig flu have to do with the launch of Windows 98?

What's it like to send email to Bill Gates?

Why is the Penny Arcade Expo like summer camp?

All the answers and more are contained within this, the hardback edition of Stephen "Stepto" Toulouse's book, A Microsoft Life. Thank you for purchasing, and Stepto hopes you enjoy reading it as much as he enjoyed creating it for you.

"A wittily entertaining jaunt through a decade and a half at Microsoft, with lots of behind-the-scenes detail and charming anecdotes on the people and process behind the Seattle tech behemoth." – Simon Carless

I'm not totally sure how it happened or where the time went, but January 30, 2010 (the year we make contact*), marked fifteen years of my working at the Microsoft Corporation. In those fifteen years, I've gone from entry-level product support person to company spokesperson to working for the Xbox LIVE team (my current assignment as of this writing). Looking back on fifteen years, my career trajectory isn't what surprises me. What surprises me is that I worked with Microsoft at all.

I was born on August 6, 1972. Star Trek: The Motion Picture was the first film I ever saw in a movie theater. My second film? Star Wars. I grew up using an Odyssey 2000 game console and then an Atari 2600. I read comics and wrote programs in BASIC—later, (badly) assembly code. I had almost every Star Wars action figure, and at least several of the die cast and plastic Star Wars toys. I knew GoBots were trash and Transformers were king. Pac-Man was better than Donkey Kong, although Donkey Kong was awesome. Red Baronwithout the gigantic fake red biplane enclosure for the Arcade screen was ghetto Red Baron. Vector graphics based Star Wars is still one of the best Star Wars games ever made; Red five will always be standing by.

I soldered add-on boards to make my Atari 1050 disk drive read higher density floppy disks (known as making the drive "happy"). I learned how to use a mouse on Apple computers. I knew a mainframe from a micro-computer from a mini computer.

I was terrible at girls, terrible at sports. I got beat up a lot in elementary school, junior high, and high school. College was my first experience in not ever having to worry about a popular idiot wanting to pummel me for alpha male status during my education. I started using the Internet in 1990 on VMS/VAX* based systems, and I used Gopher and Veronica as much as I used FTP†. My prized Dungeons and Dragons character was a wizard named Haydentwink Rebuzbicvak.

I had clear geek credentials. I was at very minimum low-tier Geekerati, for fuck's sake.

How in the world could a pedigreed geek like me end up working for the most evil place in geekdom for fifteen years?

The answer? Microsoft isn't, and never has been, evil. No one could be more surprised than me at this turn of events.

Break it down like this: it's early 1994; I'm twenty-one. I'm vaguely aware of Microsoft, but certainly the company had yet to attain its universal "evil" reputation. At that time, only rabid partisans thought the company was undeserving (and perhaps evil in acquiring) its status among technology corporations. In fact, Microsoft was in the middle of one of the more exciting development cycles for computer operating systems in geek history: the Chicago Project. This Chicago Project … "thing" was supposed to turn into Windows 4.0. It was going to be the world's first widely used 32-bit computer operating system. Microsoft was on the cusp of breaking through from being the staid provider of computer operating system wannabes to launching what might be the single most successful consumer product of the decade.

I'm thirty-seven as of this writing. The entirety of my adult life has been spent working at Microsoft. I've never known any other type ofcorporate existence or job, and I can only dimly remember what it was like to not have a fly-by-night, day-to-day type of job like the ones I had before. My very identity is tied up in a name I was given at Microsoft: Stepto, the combination of my first name and last name that the computer spit out when creating my e-mail address. When I began at the company, I never dreamed I would be here this long. In fairness, however, that was more because I felt so grateful to have the job that I was scared they would figure out I wasn't worthy and would let me go.

It occurs to me that fifteen years is a long time to be affiliated with anything that isn't blood related or that you don't sleep with. At this pace, in six or so more years I will have spent half my life at Microsoft! Yet it has been fifteen years I wouldn't trade for anything.

So, why are you holding (or maybe e-holding, or maybe listening to) this tome?

To celebrate this most unlikely of geek lives, I've taken the time to collect and polish a lot of the Microsoft lore I have put on my blog at Stepto.com. This book represents a collection of those stories, rewritten and expanded.

Some of the stories are very specific to Microsoft; one or two of them are tangential, made up of an observation or comment in which Microsoft serves a small part. Hopefully all of them are interesting to you, wonderful person who just exchanged money for my goods and services. The impetus for compiling all of this into a book was mostly that many of the stories I tell here aren't especially technical. Instead they focus on the everyday life of being a Microsoft employee away from a lot of the crazy, emotional, and competitive arguments that tend to accompany discussions of the place. Having said that, from time to time I will "go all technical" on you when relating a story; I'll try and explain acronyms and provide footnotes where I can.

One thing I do want to be clear about: you're not going to get detailed accounts of executive meetings or high-level decisions where I explosively detail the exact moment when the cloak shrouded Knights Gateslar decided to kill some poor company or technology while cackling and twirling their moustaches. Nor will you get some type of apologia about Microsoft or its history. What you will get are a lot of observations about the evolution of the company, details about the things I have been witness to, and some stories about Microsoft you might not have heard. Occasionally I might exaggerate a situation and will strive to overdo it to point out where that occurs. But everything in this text that might make you stop and go "No. Way." actually happened. When I'm describing events as I saw them, relating to something specific to Microsoft, I'm not making it up. Along the journey, if I manage to elicit a chuckle or two, I will consider the time well spent indeed.

As a final thought, writing this intro, I'm thinking about that young kid waking up at 7:00 a.m. (!) for his first experience in the corporate world of America. I had given up a fairly decent job with a trio of restaurants in Dallas that my family had worked in for years, for a contract position at Microsoft—a position that had no guarantee of being a career.

I'm wondering what I would say to that kid if I could meet him now. I'm guessing he'd say "Holy shit, I got fat! And bald! But it looks like I can afford good beer, finally."

I'm not the kind of person who would say, "And here's to another fifteen," because you never know. I will say I am enormously lucky to have seen the things I've seen at the company and am incredibly fortunate to do what I do there now and work in the video game industry, my first love.

Plus, I really can afford the good beer now, so it would be a real disappointment to my twenty-one-year-old self to let that go.

Speaking of beer, I'm going to go have one now. Grab one yourself, or your beverage of choice, and we'll pick up again here in just a second.