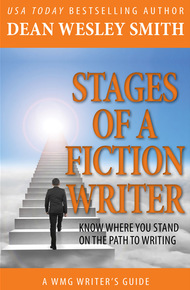 Stages of a Fiction Writer by Dean Wesley Smith

With more than a hundred published novels and more than seventeen million copies of his books in print, USA Today bestselling author Dean Wesley Smith knows how to write fiction. And he has traversed every stage of writing along the way.

In this WMG Writer's Guide, Dean takes you step-by-step through the stages most fiction writers go through and how not to lose hope along the way.

Want to enjoy your writing more and let your storytelling evolve in its own time? Then learn from Dean's experience and discover what to expect at each stage of a fiction writer's career.

I love this book, partly for its back story. Dean first explored the stages of a fiction writer back in the 1990s, at an informal writing workshop that met at a local restaurant. His exploration of the stages angered half the writers in the room. Those writers booted him out of the workshop because he dared challenge their cozy little writing worlds. Where are those writers now, you might ask? You got me. Because none of them are professional writers. For all I know, they're still meeting in that same restaurant on Tuesday nights, talking about stories they'll never publish.

If you want to know where you stand in the stages of a fiction writer's career, read this book. If a bit of controversy bothers you, skip this one. Because it'll make you question everything you've ever known about writing. – Kristine Kathryn Rusch

About twenty-five years ago, I was struggling to figure out where I was on the path to becoming a fiction writer.

I had sold novels, lots of short stories, been an editor, owned a publishing company, and had readers buying my books.

But honestly, none of that mattered to me. I liked it, sure, but my goal was to be a better writer, a better storyteller, actually. And I had no idea at all where I was at on the road to that goal.

For the previous twenty years, as my skills grew, I had also been studying other writers and trying to understand how they did what they did.

I was typing in other writers' work to try to learn their tricks and their craft.

I was reading every how-to-write book I could find.

But I still felt flat lost. I felt I had advanced, that I was past the basics, but what world did I have ahead of me with storytelling that I couldn't see?

I am the type that likes to look out ahead. But with storytelling, it was just a wall of mist.

So for my own use, I started to put this "Stages of a Fiction Writer" together.

I made the mistake, early on, of presenting some of this at a writer's workshop. Some of the members got very angry. And I do mean very.

I was kicked out because of my "attitude" and putting others down.

I had no intention of putting anyone down.

Seemed I had presented this wrong. But it was a work in progress.

And it wasn't until almost ten years later, about fifteen years ago now, that it all finally came together and made sense to me.

So a few years back, I did this as a lecture through WMG Publishing and put it up. It is still up as a lecture. But now I thought it might be time to get this into a book.

Knowing where I was at in learning storytelling, and where I could go if I kept practicing and learning, for me was very freeing.

Where Are You Going as a Writer?

Not a lot of writers give this much thought beyond the "I want to sell more and make a living."

Or… "I want a lot of people to read my books and be read in a hundred years."

We all have those.

Nothing at all wrong with them.

But they sure don't help me in trying to figure out in general, where each of us stand as a storyteller.

Now, there are basics in all this that I am going to state and more than likely repeat numbers of times.

I can't even begin to count the hundreds, maybe thousands of great writers who started to sell, thought they had it made, that they knew it all, and stopped learning. Now they are "Whatever Happened To" writers.

Learning can never stop. And if you have that attitude of learning is critical, then you can learn what it will take to move up stages.

Second… You can never learn it all when it comes to the craft of fiction writing.

This is sort of a shadow of the first point. The moment you think you have learned it all, that's where you freeze down. And that's where your career will remain until the craft of storytelling passing you by and no one buys your work anymore.

So where are you going as a writer?

That question assumes an end goal.

There is no end goal.

My answer is always, "Forward, to keep learning, and become a better storyteller."

My real end goal is to be challenging myself with a new story and a new way of telling it when I fall over dead.

In this book, I'm going to use poker playing as a metaphor to help be clear on some of the areas I am talking about. It is a very clear metaphor to how writers work.

Don't worry, I will make sure I explain poker clearly all the way. You do not need to be a professional poker player to understand this.

Or have even picked up a deck of cards. I promise to make it clear.

For most of my life, I played professional cards in one aspect or another. I started by playing gin rummy in the early 1970s, mostly in back rooms at golf clubs and in tournaments in Las Vegas.

I also played blackjack, and was a fan of Edward Thorp's 1966 book called Beat the Dealer.

Yes, I learned how to count cards.

When I went back to college in the early 1970s, I joined a blackjack team and paid my way through college completely playing on one team for a few years, then another for law school. I never told anyone I was doing that and had a couple part-time jobs to pretend I was earning money for college.

I also started playing poker in Las Vegas in the early 1970s and then off and on through the years after that, usually after the team was finished and headed home, I stayed a little longer to play some poker.

About twenty years ago, I picked up playing blackjack again at a local casino (not card counting, just playing tournaments) and then migrated to the poker room.

Then, at one point, disgusted with what was happening in traditional publishing, I basically quit writing and played professional poker to make a living. I did fine for a few years, playing mostly tournaments and writing a short story here and there along the way.

It was at a poker table about fifteen years ago in Las Vegas that I finally understood the Stages of a Fiction Writer.

And from that moment forward, I knew where I was going with my writing, what I was working toward.

Sure, book sales are great, but for me, I am happy with telling a good story. A story I feel as if I did my best with for the level of storyteller I am at the moment.

A Word of Warning

Because of the reaction to one of my first attempts at explaining this, I now understand that writers sometimes do not want to know where on the path they stand.

Mostly, of course, this is new writers who are in a hurry. Writers who get angry at this are writers who think that they should be able, with a few rewrites, to write a novel that will sell more than Stephen King and Nora Roberts combined.

And they are convinced they are better writers than those two as well as all bestsellers.

Well, with a ton of luck, I suppose that could happen. But I always bet on skill and patience and learning.

At poker tables, when some really bad poker player was on a run of luck, and being obnoxious about it, I would say to the person, "Just hold on to those chips a little longer. They will be coming back my way shortly."

And they always did, because luck is both good and bad and evens out in the fairly short run. Skill and craft and learning will always win out over time. That's why poker is considered a sport, not a gambling game.

So if you see yourself and your skill level at a certain point and it makes you angry, I am sorry. None of this is meant in any way to be personal.

This is meant to try to help the writers who want to move forward to understand what is ahead.

This is meant to pull back the mist a little and let writers peek into the minds of long-term professional writers.

And to help writers reach their dreams.