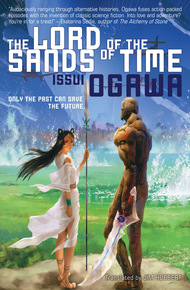 Issui Ogawa is known as one of Japan's premier sci-fi writers. His 1996 debut, First a Letter from Popular Palace, won the Shueisha JUMP Novel Grand Prix. The Next Continent (2003, Haikasoru 2010) garnered the 35th Seiun Prize. A collection of his short stories won the 2005 Best SF Poll, and The Drifting Man, included in that collection, was awarded the 37th Seiun Prize for domestic short stories. Other works include Land of Resurrection, Free Lunch Era, and an epic called Temmei no Shirube (Sign of the Heavens and the Underworld). Ogawa is a principal member of the Space Authors Club.

The Lord of the Sands of Time by Issui Ogawa

Sixty-two years after human life on Earth was annihilated by rampaging alien invaders, the enigmatic Messenger O is sent back in time with a mission to unite humanity of past eras—during the Second World War, in ancient Japan, and at the dawn of humanity—to defeat the invasion before it begins. However, in a future shredded by love and genocide, love waits for O. Will O save humanity only to doom himself?

A small, high-speed shuttle on the surface of the Moon. The Messengers had been traveling back and forth between Earth's bases scattered throughout Sol System as far as Mars.

"The launch platform's not available? What's the story?" Orville called on his internal comm circuit. The voice of the human transport chief at Moon Polar Base North came back in a flat monotone. "Orders from headquarters. If you have a complaint, direct it to them."  "Haven't you heard about the UN resolution? Bases and industrial installations are to render all possible assistance to Century XXVI Upstreamer Forces. I've got to have your cooperation," said Orville.

"We're aware of the resolution, but our government hasn't passed the domestic legislation. We're working to transition our manufacturing processes in time for passage of the new laws. This will require a bit more time."

"We don't have time, the ETs could attack at any moment," shouted Orville.

"We're a commercial enterprise. We can't take our facilities offline without compensation."

"You—" Orville cut the comm link and smashed his fist against the wall of the cockpit. "Pig-headed fool!" he muttered.

The four Messengers sitting behind him shrugged or smiled distantly. The voice of Cutty Sark reached their shuttle docked at the terminal adjacent to Polar Base North.

"It's no use. Looks like they don't plan to get moving till their butts go up in flames. What about other bases?" said Orville.

"The same, everywhere. National governments, big corporations, and private organizations and facilities. I'm meeting resistance at every level. Conflicting ideas, poor communication, key people nowhere to be found or even mentally absent. Demands for kickbacks. Meddling from protestors and skeptics. I've simply no idea how long these delays are going to continue."

"Total gridlock. Unbelievable." The jubilation that greeted their arrival in this timestream seemed to have evaporated.

"What do we do?" Alexandr asked Orville.

Orville was silent, deep in thought.

"Do we sit tight and wait? These delays aren't going to last forever. If we're going to wait, there's something I'd like to work on," said Alexander.

Orville turned to see that Alexandr was writing by hand in a notebook. "What's all that about?"

"I'm sending it to Triton in a capsule with a beacon. If I drop it off in the vicinity, someone will pick it up in a century or two," said Alexandr.

"She said I have a talent for words."

"What's your book about?" Orville asked without much interest.

Orville suppressed the urge to roll his eyes at Alexandr's earnest expression. "A bug?" he repeated.

"Yes. A little bug, born on the leaf of a big tree. He has this nice life, just eating leaves, but one day he notices he's in danger. Something is trying to suck the life out of his tree. So to avert the danger, he has to travel from his branch to the big tree trunk."

"Don't say that!" said Alexandr. "If the theme is that obvious, you lose the whole mood. This is children's literature. But who should be the villain? Bees and spiders are so passé." The rough-hewn Messenger was dead serious, thinking this over. Orville watched him write for a while, then stood up.

"If the book's for children, why don't you make the villain a bear? I'm heading out."

"I'm going to put a gun to their heads. Cutty? Hack the base mainframe and cook me up a system status message. Something like 'all systems nominal.' I don't want any company headquarters or governments involved."

"Even if I can fool them at first, they'll notice soon enough," answered Cutty. "If they discover we used force, it will only make things difficult later. I'd very much prefer that you dropped the idea."

"Can't do it. If the ETs come down on us it's too late. I need you to print me up a weapon too. A low-powered firearm. No, a sword is better. Projectile weapons are too everyday in this era. Make it as scary-looking as you can."

The onboard molecular printer was capable of laminar fabrication of anything from food to weapons. The device gave off a faint smell as it whirred into activity. Orville and his team pored over a schematic of the moon base while the sword printed out. Finally, it was ready.

Orville suited up for the walk outside and hefted the sword. It was longer than his arm, with a shimmering, milk-white blade. Alexandr grinned.

"Put it in your story," said Orville. "All right. I'll take the lead. The rest of you follow me and do what you need to do." The Messengers left the shuttle and began walking toward the base. The sun on the horizon cast long shadows across the surface.

Orville wondered if he should write something too. A letter? If he sent a capsule now, before a fork in the time streams, it would travel to all subsequent streams—to those destined to be changed by his journey as well as to those that would remain untouched. Except that he had nothing to say. It would be senseless to write only "I miss you." He envied Alexandr, who had something to share with his beloved. Orville put it out of his mind.