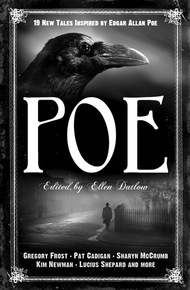 Ellen Datlow has been an editor for over thirty years, first in book publishing, but mostly editing short stories for Omni Magazine and webzine, Event Horizon, a webzine, and SciFiction, the fiction area of scifi.com. She now edits original and reprint anthologies. A born and bred New Yorker.

To coincide with the 200th anniversary of the birth of Edgar Allan Poe, this anthology celebrates the depth and diversity of one of the most important figures in literature. Compiled by multi-award winning editor, Ellen Datlow, it presents some of the foremost talents of the genre, who have come together to reimagine tales inspired by Poe.

Sharyn McCrumb, Lucius Shepard, Pat Cadigan, M. Rickert, and more, have lent their craft to this anthology, retelling such classics as "The Fall of the House of Usher," "The Tell-Tale Heart" and "The Masque of the Red Death," exploring the very fringes of the genre.

Skipping through my now dog-eared and broken-spined Tales of Mystery and Imagination, Roger gets excited about "The Pit and the Pendulum." The slavering sketch artist, about whom I'm starting to worry, draws a teeny-bopper in a tight sweater strapped down in a pit while Vinnie swings a blade over her bazooms. Jim and Sam love this, and are disappointed when Roger looks up the story and finds it's a guy in the dungeons of the Spanish Inquisition. Never mind, he says, the pendulum is the monster. By this, he means the torture angle is grabby enough without the added distraction of bazooms. The artist rubs out the bosomage, and puts in a manly chest—revealed through pendulum-slashes in a frilly shirt.

So, Pit and the Pendulum gets a greenlight. Even Sam sees one picture for the price of two is a better deal if it hauls in ten times the gross of the average four old-style AIP creature features. He quietly squelches Bert I. Gordon's Puppet People vs. the Colossal Beast project and Alex Gordon's long-cherished She-Creature Meets the Old-Time Singing Cowboy script, and pours added shekels into Pit. It's AIP's big hope for 1961.

Only problem is, "Pit and the Pendulum" isn't a story—just a scene. Guy in pit. Nearly sliced by pendulum. Escapes. Even Roger can't spin that out to feature length with long shots of dripping walls, gnawing rats, and Vinnie licking his lips. The problem is solved, unusually, by the writer. Dick Matheson takes his Usher script, changes the names, and drops the climactic house fire in favor of Pit/Pendulum business. This time, brooding youth—not the same one, though you'd be hard pressed to tell the difference—is looking for his missing sister, and she's married to Vinnie. But she's still buried alive—twice, as it happens. The Usher sets are back, with new painted flats and torture equipment to bump the House up to a castle. The establishing shot is a bigger glass painting, with crashing waves included. Vinnie keeps his moustache—which saves behind-the-scenes drama—and wears tights, always a big favorite with him.

One morning, I wake and find I've grown a moustache too. Plus I'm thinner, paler, and more watery-eyed. And my wardrobe—once full of snazzy striped threads—runs to basic black. I don't think much of it, because the times they are a-changing. Pit is, if anything, bigger boffier boxo than Usher, and the walls start closing in.