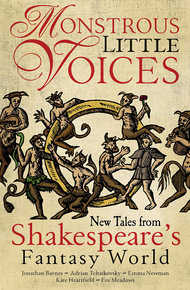 Jonathan Barnes was born in 1979 and was educated in Norfolk and at Oxford University. His first novel, The Somnambulist, was published in 2007 and his second, The Domino Men, in 2008. Between them they have been translated into eight languages. He writes regularly for the Times Literary Supplement and the Literary Review. Since 2011, he has been writer-in-residence at Kingston University. He can be found on Twitter at @jbarneswriter.

Kate Heartfield's fiction has appeared in places such as Strange Horizons, Crossed Genres, Podcastle and Daily Science Fiction. She is also a freelance journalist in Ottawa, Canada. Her favourite undergraduate assignment, nearly two decades ago, was to write an entire essay about Shakespeare's uses of a single word; her word was "mount." Her website is heartfieldfiction.com and she is on Twitter as @kateheartfield.

John Lavagnino is Reader in Digital Humanities at King's College London, where he is a member of both the Department of English and the Department of Digital Humanities. He was one of the general editors of Thomas Middleton's Collected Works (Oxford University Press, 2007), and more recently has been working on the reception of early modern drama in the eighteenth and nineteenth centuries.

Foz Meadows is the author of two YA urban fantasy novels, Solace and Grief and The Key to Starveldt, and in 2014, she was nominated for the Hugo Award for Best Fan Writer. She is also a contributing writer for The Huffington Post and Black Gate, and a contributing reviewer for Strange Horizons, A Dribble of Ink and Tor.com. An Australian expat, Foz currently lives in Scotland with not enough books, her very own philosopher and a toddler. Surprisingly, this is a good thing. She can be found on Twitter @fozmeadows.

Emma Newman writes science fiction and urban fantasy novels, along with dark short stories. Between Two Thorns, the first book in Emma's Split Worlds urban fantasy series, was shortlisted for the BFS Best Novel and Best Newcomer awards. Emma's most recent book, Planetfall, was a standalone science fiction novel published by Ace/Roc. Emma is a professional audiobook narrator and also co-writes and hosts the Hugo-nominated podcast Tea and Jeopardy, which involves tea, cake, mild peril and singing chickens. Her hobbies include dressmaking and playing RPGs. She blogs at www.enewman.co.uk.

Adrian Tchaikovsky was born in Woodhall Spa, Lincolnshire before heading off to Reading to study psychology and zoology. For reasons unclear even to himself he subsequently ended up in law and has worked as a legal executive in both Reading and Leeds, where he now lives. Married, he is a keen live role-player and occasional amateur actor, has trained in stage-fighting, and keeps no exotic or dangerous pets of any kind, possibly excepting his son. He's the author of the critically acclaimed Shadows of the Apt series as well as standalone works Guns of the Dawn and Children of Time, and numerous short stories. He blogs at shadowsoftheapt.com and is on Twitter @aptshadow.

It is the Year of Our Lord 1601. The Tuscan War rages across the world, and every lord from Navarre to Illyria is embroiled in the fray. Cannon roar, pikemen clash, and witches stalk the night; even the fairy courts stand on the verge of chaos.

Five stories come together at the end of the war: that of bold Miranda and sly Puck; of wise Pomona and her prisoner Vertumnus; of gentle Lucia and the shade of Prospero; of noble Don Pedro and powerful Helena; and of Anne, a glovemaker's wife. On these lovers and heroes the world itself may depend.

These are the stories Shakespeare never told. Five of the most exciting names in genre fiction today – Jonathan Barnes, Adrian Tchaikovsky, Emma Newman, Foz Meadows and Kate Heartfield – delve into the world the poet created to weave together a story of courage, transformation and magic.

"WHY HAVE YOU come here, Ariel? Why now?"

"At first, I was busy. Fairy business. I was on that island for a long time, child. I had to return to Titania's court, to make my obeisances, pardons, pledges. I had to report and explain my absence. But after that—" She falters, looks aside. "After that, I was ashamed. And hopeful, too, just a little; I thought you might adjust, given time."

"I could adjust, perhaps. But as they will not, I cannot—or if I did, there'd be no point to it."

She doesn't ask who they were. There's no need.

"Do you love him?" Ariel asks, softly.

"Compared to what?" It comes out harsher than I intend, a pant of rage as pain saws through me. My father impressed on me the value of feminine virtues, and when the ship came—when Ferdinand came, and I finally had an audience—it was surprisingly easy to embody them, as though my flesh and feelings both had only awaited their function. But the world in which it was easy was a small, unvarnished one, as utterly distinct from my present state as shells from sapphires. If such a woman truly exists, she is not me, nor have I met her like, here in this place where my every move is scrutinised for the failings of barbarism. "Compared to how I once loved my father? Compared to how I should love myself? I do not." Tears slip down my cheeks. "I do not, and now it's all too late."

"It doesn't have to be." Ariel kneels, or gives her airy form the semblance of kneeling. "You can leave this place, Miranda. Go where you will."

"As a woman alone? One marked as spurned, or barren, or runaway from her lawful lord, and whose father in any case would drag her home again? Such choices you offer! Pearls to make a pauper rich." My lucidity slips like a lady's veil, restored by the cooling brush of Ariel's hand.

"What if," she says, and stops. On the island, I had no true glass, but this past year, I've grown enough accustomed to the sight of my face to recognise its expression now as one of fear, and grief, and defiant apology. "What if they thought you dead?"

"NATURAL SLEEP, LIKE natural life, is precarious," said Ariel, alighting on the sand. Her leopard-voice was a rumbling purr. "Remember that, Miranda."

"I will, but what does precarious mean?"

Ariel paused in the act of washing a paw. She twitched an ear, then popped back into our shared girlshape, toying with a curl. "It means unsafe, and subject to change. Like a sandbar moved by waves."

I nodded; I was an expert on sandbars. Then, unbidden, a strange thought came to me. "The mice moved when I touched them," I said. "Do I not move in my sleep?"

"You don't," she said. "No matter the provocation, you stay still."

Her eyes were mine, yet older than mine. "That depends," she said.

"THERE IS A spell," says Ariel, when I say nothing. "A glamour of sorts, though a little more complex. All who know you here will think you dead of your childloss fever—which I can cure, in either case," she adds, quickly. "You will live, Miranda. I owe you that much. But if you wanted—"

"Yes," I say. I exhale relief like poison. I don't know where I'll go, if Ariel will take me there or merely provide me with a chance at departure, but I cannot stay here. My island was not wild, compared to this.

There are such monsters in a palace.