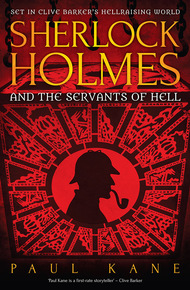 Paul Kane has been writing professionally for almost fourteen years. His critically-acclaimed genre journalism has featured in innumerable magazines, and his award-winning short fiction has appeared in magazines and anthologies on both sides of the Atlantic, and been collected in a number of volumes. His website, which has featured guest writers such as Stephen King, James Herbert and Neil Gaiman, can be found at www.shadow-writer.co.uk He currently lives in Derbyshire, UK, with his wife – the author Marie O'Regan – his family, and a black cat called Mina.

Sherlock Holmes and the Servants of Hell by Paul Kane

Late 1895, and Sherlock Holmes and his faithful companion Dr John Watson are called upon to investigate a missing persons case. On the face of it, this seems like a mystery that Holmes might relish – as the person in question vanished from a locked room. But this is just the start of an investigation that will draw the pair into contact with a shadowy organisation talked about in whispers, known only as the 'Order of the Gash.'

As more people go missing in a similar fashion, the clues point to a sinister asylum in France and to the underworld of London. However, it is an altogether different underworld that Holmes will soon discover – as he comes face to face not only with those followers who do the Order's bidding on Earth, but those who serve it in Hell: the Cenobites. Holmes' most outlandish adventure to date, one that has remained shrouded in secrecy until now, launches him headlong into Clive Barker's famous Hellraising universe… and things will never be the same again.

With an introduction by Hellraiser II actress Barbie Wilde

I can still remember the day I first met him, not knowing at all what to make of the fellow. Abrupt yet brilliant, with dark, slicked-back hair and such an intense gaze it felt like he was seeing right into the heart of you, seeing your very soul. He gripped my hand in that chemical laboratory with a strength I would hardly have credited the man possessed. I had been warned by my friend Stamford that I might not get on with Holmes, but right from the very start – during that conversation about haemoglobin, and the importance of blood (something that would take on even greater significance during the events I am reluctantly about to set down) – we had a connection. I felt it, and I like to think in his own way Holmes did as well.

It would be a meeting that saw me moving in to 221b Baker Street to share lodgings with him, whereupon I witnessed various visitors coming and going, including a distinctive Jewish peddler and a railway porter. Not long afterwards, I was drawn more fully into his world as we worked on our first cases together. It was a world I was at once excited by and eager to experience all the more. In time, I would begin to transfer my notes on the cases into stories – which Holmes would very often dismiss due to my embellishments, my use of what he called 'colour and life,' not to mention the more romanticised elements of the tales. More than once he chastened me for not keeping to the facts, for not simply presenting the instalments as aloof studies – something that I could never have done, because they involved people, they involved feelings and emotions; spheres of life that Holmes struggled with and could never fully understand. But there were more than enough clinical essays by the man himself on everything from tattoos to tobacco smoke, which he would often draw my attention to. What I was trying to do was present our exploits in a way that could be understood and – dare I say it – even enjoyed by the common man.

I have to admit, and I can do so honestly here, that in my pursuit of these literary goals I did embroider things a little. Something that became almost a necessity after Holmes' untimely –

But I have said too much already – and far too early. Suffice to say, it was not unknown for me to use 'artistic licence' in my detailing of our adventures, even including small jokes that I never for once thought would be taken seriously; a throwaway line about a giant rat, for example – something that did not exist, or that we certainly never encountered if it did. I wrote in that story, which detailed the debunking of the notion of a vampire in Sussex, that Holmes had said the world was not yet prepared for such tales. Again, this was not so much something the detective said as my own thoughts on other singular and more disturbing subjects.

Indeed, it took me some time to actually bring myself to write about particular cases: the terrifying Baskerville Hound, for one, a creature that I did not need to exaggerate about. Holmes' 'death,' as well – another pivotal occurrence in my life and work, something that so profoundly affected me it caused in the writing up of them to mistakenly set two of the entries in the period of those wilderness years that have come to be known as 'The Great Hiatus'; as if the very act of doing so would bring Holmes back to life. And, who knows, perhaps that was the case, because he did return to me, did he not? Returned with a story that was so fanciful I was hesitant to chronicle it at first for fear that, although true, it would be horribly derided.

Reality, fantasy. Truth, lies. The line between them is paper-thin. I have had the good fortune – or misfortune, depending on how you look at it – to live long enough to see Holmes make appearances on the silver screen, the most recent of which depict me as some sort of bumbling buffoon rather than reflecting the reality of the situation. I suppose I should be grateful that I appeared at all! And I know, for I left hints myself of so many uncollected stories, that others will take up the baton in years to come and continue to write about our adventures; some of which will be more outlandish and unbelievable than I ever could have imagined. I foresee a time when the fictional character of Holmes will time travel, just like H.G. Wells' character in his machine; when he will battle dinosaurs and alien creatures; when he will be just as at home in a future setting in the next century as he was in the fog-filled streets of nineteenth-century London. All this will come to pass, I am sure. But the truth will remain the truth.