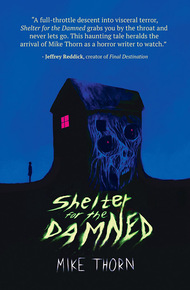 Mike Thorn is the author of the short story collection Darkest Hours. His fiction has appeared in numerous magazines, anthologies and podcasts, including Vastarien, Dark Moon Digest, The NoSleep Podcast, Prairie Gothic and Beyond the Book of Eibon. His film criticism has been published in MUBI Notebook, The Film Stage, and Vague Visages. He completed his M.A. with a major in English literature at the University of Calgary, where he wrote a thesis on epistemophobia in John Carpenter's Prince of Darkness.

Shelter for the Damned by Mike Thorn

While looking for a secret place to smoke cigarettes with his two best friends, troubled teenager Mark discovers a mysterious shack in a suburban field. Alienated from his parents and peers, Mark finds within the shack an escape greater than anything he has ever experienced.

But it isn't long before the place begins revealing its strange, powerful sentience. And it wants something in exchange for the shelter it provides.

Shelter for the Damned is not only a scary, fast-paced horror novel, but also an unflinching study of suburban violence, masculine conditioning, and adolescent rage.

Mark saw the outline of something etched against the moon, something vaguely house-shaped. He stopped.

Adam, whose eyes were cast down under his hood, failed to react in time and thudded into Mark's back.

"What the shit, Mark?" He rubbed the corner of his skull that had bonked Mark's sharp shoulder blade and followed his friend's eyeline. "What is that?"

Scott, who'd been trailing further behind, said, "It's a house."

Adam spat an arc of saliva, shoved his fists into the pockets of his jeans. "More like a shed."

Scott shook his head. "It's shaped like a house."

"Maybe somebody used to live in there."

Adam laughed. "Mark, will you talk some goddamn sense into this fool? I mean, let me just throw this out there—what kind of a wussy tucks his T-shirt into his jeans, for Christ's sake? What is this, the nineteen-fuckin-fifties?"

Adam had hit a familiar sore spot. Not only did Scott's dad force him to tuck in his shirts, he also forced him to iron his shirts, and even his jeans. Mark wouldn't be surprised to learn that he was made to polish his sneakers, too.

Scott hissed something nasty between bared teeth and yanked his oversized T-shirt from the waist of his pants.

Mark had been half-listening to his friends, but he said nothing. Adam paced and readjusted his hood. He shot a glance at Scott that said, Stop being such a baby.

Scott flattened his shirt with the palms of his hands, then stood still. He tried to look aloof, but looked scared shitless instead.

Mark continued staring at the place, all frayed splinters of wood and flat, desiccated walls. He could almost feel its texture, simply by looking at it.

"Who the fuck would live in there?" Adam directed the question at no one in particular.

It looked impossibly weathered, transformed by age. Mark couldn't help but notice that, by some unexplainable stroke of luck or happenstance, it was untouched by late-night prowlers and graffiti artists. It wore no evidence of vandalism, no etchings or street tags.

"Nobody lives in there." Mark's response slipped out with all the grace of bad slapstick comedy; it might've been the first thing he'd said all evening. It wasn't difficult to remain silent when he was with Adam and Scott. He allowed Adam to shout his opinions and he allowed Scott to fervently disagree with said opinions.

Adam wiped his bangs out of his eyes. "So we can smoke in there."

Mark didn't even take a moment to pause. "Do you have cigarettes?"

"Courtesy of my big brother."

Scott stepped forward and held out his hands. "Hold on, guys. Come on, we can't smoke in somebody's house. Be smart. They'll call the cops."

"The people inside the house, that's who." Then, after a pause, he nodded at Adam's Alice Cooper pullover hoodie. "And who the hell wears rock band merch anymore?"

Adam ignored the weak, belated comeback and gazed heavenward, as if imploring God to knock some sense into his paranoid buddy. "It's not a house, for Christ's sake."

"It's a shack," Mark said. Yeah, that seemed right.

"It's dark out here," Adam said, an unlit cigarette wagging from the side of his mouth. "Nobody's going to see us. Besides, it'll be safer in there than it is out here. If somebody sees us smoking out here and makes the right call, my dad will peel my skull like a fuckin' orange. I'm going in."

Scott turned to Mark. "What do you think?"

Mark looked hard at the shack. It had the symmetry and structure of any beat-up old building, like a tool shed you might find in some forgotten industrial place—but there was something formless about it. The walls looked sewn together, like an invisible force was holding them upright. He sniffed at the chilly night air. He stared off into the field's surrounding area, where boxy houses of privatized comfort were separated by equally distanced lawns. Those houses had people living inside of them. The houses had names and addresses and porch lights and Welcome Home mats on their doorsteps. By contrast, the shack defied shape. It defied color. It was an assortment of nondescript grays.

There was definitely something about it. How had they never seen it before? Mark was sure they had crossed this very field at least once, if not several times, and yet they had never taken notice of it. His brain was blaring with strange excitement. Go on, take a chance.

"I'm going in, too," he said, keeping his voice level.

He set his eyes on a fissure between the door and the wall. A distant slit, a hair's worth of blackness. A teasing glimpse of inside.

Adam nodded, slipped a cigarette to Mark, then held the pack out to Scott. "You coming with us or what?"

Scott fixed his eyes on the shack. Bobbed uncertainly on his feet. Mark thought he saw him shudder.

They approached the shack, clutching smokes inside their fists. Mark reached the door first. As he stepped toward it, something like a gust of heat sighed from inside, breathed into his skin, massaged his muscles and coiled his bones. Damn, it was getting cold outside.

There was no doorknob. Nor was there a hole where a doorknob might have been. The entrance was a flush, unbroken surface. Mark eased his fingers into the crack between the door and the wall, and warmth gushed out again, subtler now. He pulled a little and the door crunched open.

"Why don't we try someplace else, guys?" Scott said.

Adam jumped on the spot, like a cartoon character having a tantrum. "Fuckin' give it a rest, Scott, will you?"

Scott grabbed Mark's shoulder and restrained Adam with his other arm. "Hold on for one second. What if somebody's in there? This is a breaking and entering sort of situation."

"Will you for Christ's sake look at the place, man?" Adam said. "It's fucking ancient."

"I'm not yelling. I'm trying to make a for Christ's sake point."

"You're yelling your point."

Unlike Adam, Scott had something to lose. Scott's parents were diligent, merciless monitors; if he did anything wrong, they'd know within minutes. Somehow, they always did. Adam, on the other hand, faced the daily possibility of getting yelled at or whacked, regardless of what he did.

"Okay, then why is it here?" Scott insisted.

Mark quickly discovered that he couldn't muster an answer. "I don't know," he said. "So we can have a place to smoke."

Scott didn't return Mark's smirk, but he looked calmer for a moment, before a somber expression crossed his face. "What if somebody died in there?"

"Nobody died in there," Mark said. "Nobody lived in there."

"If somebody died in there, we would know about it by now," Adam said. "Everyone goes crazy over haunted houses and shit like that."

Scott tilted his head to the side. "I don't know…"

"Adam, please be quiet," Mark said. "Look, Scott, you want to smoke a cigarette, right?" If nothing else, he could always appeal to Scott's intensifying nicotine cravings.

"Okay," Mark said, "let's weigh out the pros and cons: if somebody's in there, and I really don't think anybody is, we can just say we had no clue that we weren't allowed inside."

Scott opened his mouth to speak, hesitated, then shot his hands into the air—an I give up gesture. "Okay, fine. Jesus, you're insistent, the both of you."

Mark entered first. The outside suburban air bled into the shack's interior. It was warmer and drier in the shack, yes, but he felt something much more specific than that, much less physical. There was a transition. Mark paused, allowing it to set in.

The walls of the shack looked like they'd been painted with shadows. The windows were coated in grime. The place had two levels, the top even darker than the bottom. Tendrils of moonlight snaked through the rot, exposing detail. Everything was made of wood; everything was gray. It looked as if no one had been in here for decades.

The three boys' sets of eyes drifted to the staircase. Scott and Adam took a mutually indifferent glance, but Mark's eyes lingered. His gaze crawled up the incline and he squinted, trying to distinguish forms in the darkness. He took a step forward and craned his neck in an effort to see more detail.

Adam's voice broke his focus. "What are you doing?"

He couldn't explain exactly what he felt in that moment. Sort of an ebbing…like he'd just been caught up in the best film he'd ever seen, and for a few seconds had actually forgotten about the world outside the screen. He stopped replaying recent arguments with Mom and Dad, lost any concerns about his slipping grades, about the often creeping sense that all the authority figures were right, that there was something wrong with him. As soon as he entered, he didn't want to leave. He was not equipped to understand. He only knew that, in this strange and intense moment, he wanted to breathe the shack's squalid air forever.

Adam approached him and flicked his lighter to life. The flame coloured the murk with a marble of orange light. Mark dipped his cigarette, sucking filter and then smoke. The tobacco tasted good, and the nicotine rush was even better, but he wasn't concerned with those things.

Right now, nothing mattered but the place itself.

Adam and Scott lit their cigarettes and sat cross-legged on the floor.

"Okay, I admit it," Scott said. "This place is kind of interesting. I wonder what it is."

Gray smoke trailed from Adam's nostrils. "It's Satan's pad. It's a spaceship. It's a monster's stomach. Who gives a shit? It's a place to enjoy a fucking cigarette."

Mark's body came alive, tingling as he approached his friends. He sat beside them, pulling smoke into his throat.

"You see?" Adam continued. "Nobody's jumping out to kill us. No fuckin' ghosts. No crazy shit."

Scott tapped ashes onto the floor. "You wouldn't know if there were ghosts in here."

"What are you talking about?" Adam said.

"How do you know? Have you ever seen one?"

They sat for hours, talking dirty in the rot and gloom. Mark had never taken so long to smoke a cigarette. He half-listened, but mostly he just breathed. Mostly he just felt.