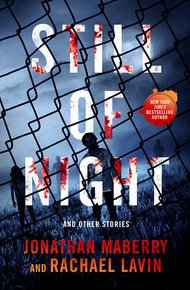 JONATHAN MABERRY is a New York Times bestselling author, 5-time Bram Stoker Award-winner, and comic book writer. His vampire apocalypse book series, V-WARS, is in production as a Netflix original series, starring Ian Somerhalder (LOST, VAMPIRE DIARIES) and will debut in 2019. He writes in multiple genres including suspense, thriller, horror, science fiction, fantasy, and action; and he writes for adults, teens and middle grade. His works include the Joe Ledger thrillers, Glimpse, the Rot & Ruin series, the Dead of Night series, The Wolfman, X-Files Origins: Devil's Advocate, Mars One, and many others. Several of his works are in development for film and TV. He is the editor of high-profile anthologies including The X-Files, Aliens: Bug Hunt, Out of Tune, New Scary Stories to Tell in the Dark, Baker Street Irregulars, Nights of the Living Dead, and others. His comics include Black Panther: DoomWar, The Punisher: Naked Kills and Bad Blood. He lives in Del Mar, California. Find him online at www.jonathanmaberry.com

Rachael Lavin is a LARPer, cosplayer, part time forest witch, full time nerd. Call Center representative by Day, she rejects this reality and replaces it with her own. When she's not writing, she can be found hunched over her sewing machine, taking pictures, or running around the woods with foam swords. When she's not living in a fantasy, she resides in Hamilton, NJ with her boyfriend and a large number of fish.

Still of Night by Jonathan Maberry and Rachael Lavin

The dead rose. We fell.

But not everyone thinks the war for survival is over. Heroes rise in times of crisis, and STILL OF NIGHT tells their stories…

DAHLIA -a bullied high school girl with a love for edged weapons goes from victim to powerful leader as the zombie apocalypse sweeps through her world.

RACHAEL ELLE -continues her journey from comic-con cosplayer to actual hero as she encounter a community with a dark and terrible secret.

CAPTAIN JOE LEDGER and his best shooters, TOP and BUNNY, head to an overrun San Diego to try and save a possible cure for the virus that is bringing the dead back to unnatural life.

And in the wilderness, Joe, Dahlia, and Rachael Elle will come face-to-face with savage gangs, an army of the living dead, and the mysterious and deadly OLD MAN CHURCH.

The final battle unfolds in a little town called Happy Valley, where the residents have found their own unique and terrible way to survive the end of the world. But a war is coming, and no one will escape the last great war between the living and the dead.

STILL OF NIGHT is the fourth book in NY Times bestseller Jonathan Maberry's bestselling DEAD OF NIGHT series. George A. Romero called DEAD OF NIGHT and its sequel, FALL OF NIGHT, "The official prequel to NIGHT OF THE LIVING DEAD as far as I'm concerned."

Ever been in a helicopter crash?

There is no way to brace. There is no way to deal with any part of it. Your only hope is to get right with Jesus as fast as you can and hope that he isn't playing golf with Buddha, with his phone switched off.

In the split second the pilot yells that he has a dead stick and that you're all going down hard, you become acutely aware that a helicopter is a small metal box. It's filled with sharp edges and a lot of incidental shit that's suddenly going with you into an industrial dryer. The world spins and you can feel the subjective floor beneath you drop away. Gravity whispers bad promises in your ear. Adrenaline speed-bags your heart. You hear grown men and women—all of them tough and hardened—begin to scream. Through the windows you see the world whip around like a tilt-a-whirl.

You know the ground is waiting for you and it loves to kill things. Consider all of the billions of dead whose bones rest in the ground. It's a hungry thing and it is never satisfied.

But any bad thing can get worse. Much, much worse.

Like when the guy strapped into the seat next to you on that falling helicopter is trying to bite you. Not out of fear, but because he has a hunger so deep that nothing, not even death, is going to stop it.

That's how we fell.

It's why we fell.