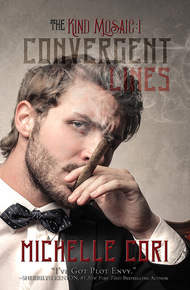 Michelle Cori lives in the Rocky Mountains when she isn't traveling to the next Comic Con. Currently, she spends her time running a bar and telling tales over drinks as well as in the form of novels and comics. She shares her life and home with her teenaged son and two crazy min-pins named Harvey Wallbanger and Honey Bunny.

Traveling, bourbon, hard ciders, record shops, tea, bookstores, and good ales are some of her other pastimes. She has a love for Flash Gordon, Highlander, Star Wars, Dune, Star Trek, Planet of the Apes, the Muppets, Labyrinth, comic books, and all things 80s. Often, she can be found writing at various coffee shops around the country.

Human-fae hybrids who have existed alongside humanity for thousands of years. With long lives and magic they shaped the world.

Until a curse… or rather, curses…

Longing for freedom, Grayson Penrose finds himself dreaming of the past, searching for something he lost, but hating his empty life. He wants nothing more than to be left alone. But fate has other plans for him.

Placed in the path between human and supernatural nations, with his curse lifted, only Grayson can carry the burden of his dying race.

I heard the tumblers move. I stood and pushed against the door just as I heard someone in the stairwell. I hurried into the room and looked for a place to hide.

The room could have come out of a TV morgue scene. On the wall to my right was the large cooler with several small latched doors for bodies. In the middle of the room, several stainless-steel roll-around tables sat empty. To the left was an open closet door.

I rushed into the closet, which turned out to be filled with cleaning supplies, and closed the door with a little click. I got into the corner behind the door.

I held my breath as I heard two voices nearing.

"Damn security system, do we need to look through every room?" a male voice said.

"You know the protocols."

"Was this door unlocked?"

"I don't remember. We'll lock it on the way out; don't forget or we'll hear about it tomorrow morning."

"Yeah. Did you check the closet?"

The doorknob rattled and the door opened. I held still hoping my cape would help if he saw me. A large flashlight beam shone in the dark corners of the closet.

"There's nothing in there."

"I told you there's no point. How long between when the malfunction happened and when we got there? A minute, maybe a little more? Who would want in this creepy place?"

"Yeah, yeah, but we have a job to do. Come on, let's finish this. I want to continue with our game."

"Sure. But you're locking the door." I heard the door open and I relaxed… and my foot bumped the mop bucket. Smack! The mop handle hit the floor.

"I don't know. It came from the closet."

One of them returned, pointing the flashlight beam at the floor. "It's a mop handle." The man walked into the closet, knelt, and picked up the mop. As he stood, he backed into the door causing it to open wider, concealing me further from view.

"Nothing to worry about. Let's go."

I heard the door squeak open and the key in the lock, locking me in with Hilda. It took my heart a long time to quiet itself. I waited almost five minutes before moving again.

Despite the risk, I turned on the lights. There was no way I would be alone in the dark with Hilda. My skin crawled at the thought of what I planned. I hoped they hadn't taken her clothes and things away from her yet, or this might get messy.

I wondered which cooler housed Hilda's body. There were three rows with four doors each. My guess was they didn't have many bodies here, so the middle row of drawers would be the easiest. I started there. The first one I checked was empty, but not the second. A sheet covered the body. Under the sheet I found an old man. I closed the drawer.

I tried the third door to find another sheet. The air felt heavy. This was her, I knew it before I looked. I held my breath, and looked beneath the sheet to see her dark, dead eyes staring up. She still had her clothes on. I imagine they threw her in here because the wedding and events of yesterday took a bit more precedence than her death.

I shivered, as I pulled out the drawer to reveal the rest of her. She looked strange, pale in a long, dark dress. Her brown hair had been styled in an up-do and she was still wearing all her jewelry: dangling pearl earrings, a gold watch, and several rings. If it weren't for her eyes being open, she might look like she slept. There was one strange thing I couldn't make sense of, a dark singe mark around her neck. It looked as if she'd worn a necklace with a large charm under her dress and the necklace had burned her.

Around her waist, she wore a belt with several small pouches. Hesitant to touch her, and thankful for the gloves, I reached for the belt. I popped the snap closure on the first pouch. Inside I found several different rocks and gems. Certain that what I looked for wasn't here, I moved on to the larger of the two on the side nearest to me. There I found money and other common items one would expect in a purse. I put everything back and walked to the other side.

A single pouch waited to be examined on this side. I hoped what I was looking for would be there. I doubted she'd risk keeping a dark cursed object in her house where another might happen upon it. No, on her person was the best place.

The snap on this pouch didn't want to open. I jerked it hard and fell backward. The force caused Hilda's head to tilt to the side just enough to "look" at me. I shivered, cursing at the creepiness of this. I stood back up, and finally managed to get it open, except it looked empty. To be sure, I reached in and my hand rubbed something. I wrapped my finger around it and pulled it out. In my palm, sat a black velvet drawstring satchel. The velvet bag felt dirty and oily, even through my gloves; I wanted to drop it. It had to be the dark object.

A small noise caught my attention. I looked back at Hilda in time to see her mouth opened, the sound of cracking bone filled the room as a dense, black mist escaped her gaping mouth. I fell backward into a stainless steel roll-around cart, which slammed to the floor with a clatter. I scrambled away, as the mist dissipated. Dead bodies weren't supposed to do that. My heart pounded in my chest. It would be a miracle if security didn't come back because of all the noise.