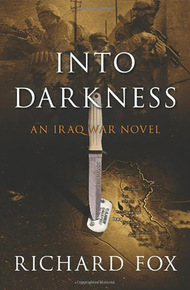 Richard Fox is the author of the Ember War Saga and Exiled Fleet series. His novel, Iron Dragoons, won the Dragon Award for Best Military Science Fiction or Fantasy novel.

He lives in fabulous Las Vegas with his incredible wife and three boys, amazing children bent on anarchy.  He graduated from the United States Military Academy (West Point) much to his surprise and spent ten years on active duty in the United States Army. He deployed on two combat tours to Iraq and received the Combat Action Badge, Bronze Star and Presidential Unit Citation.

Into Darkness by Richard Fox

A deadly ambush leaves two soldiers in terrorist hands, and their only chance at rescue is the connection between Army intelligence officer Eric Ritter and the Al Qaeda mastermind behind the attack.

To find the lost soldiers, Ritter must ally with the Caliban Program, a covert arm of the CIA that gives him remit to use any means necessary in his search; means forbidden by his oaths as an officer.

Surrounded by hostile Iraqis and hounded by the terrorist leader that wants him dead, Ritter maneuvers between the shadow world of the Caliban Program and his cover as another soldier in the War on Terror.

Ritter must decide if he'll embrace the dark path before him and betray all that he stands for, or risk leaving two men behind.

Written in the brutally honest voice of an Iraq War veteran; Fox's experiences bring an edge of pathos and undeniable authenticity to the book.

Fear made his hands shake. Private First Class O'Neal would blame the chill Iraqi air if his fellow Soldiers noticed his palsy. Admitting his fear was intolerable; a fearful turret gunner was a liability to the crew and the vehicle he had to protect. The rest of his crew wouldn't understand his fear, since they were surrounded by nothing but night and wind.

O'Neal peered over the armored parapet of his turret. He saw the surrounding orange trees, hundreds of faux suns bobbing and swaying in the wind. He couldn't make out much else through the trees and bushes lining the road. Occasionally, the wind pushed the sound of a distant generator that was powering the feeble lights of a distant farmhouse.

There was nothing to be afraid of, which was the source of O'Neal's phobia. His mind filled the darkness with black-clad Iraqis bent on murdering him. Whenever he was in danger of nodding off, the danger became an irate drill sergeant waiting to catch him asleep at his post. Despite the armored protection of his vehicle, despite being armed with a belt-fed machine gun and a rifle within arm's reach, and despite being surrounded by men who would kill and die to protect him, he was afraid.

I'm nineteen years old and still afraid of the dark, he thought. He loathed himself as he imagined the humiliation of admitting his feelings to his buddy, Brown, or his fire team leader, Sergeant Mendoza. They'd probably ask if he wanted his mommy and a new diaper before going to sleep.

O'Neal shook the contents of a tiny bottle of Tabasco sauce onto his finger, then rubbed it into his gums. The pain kept him awake and kept his mind away from the apparitions scuttling through the orange orchard. The distant glow of Baghdad was some comfort; the light pollution seemed to defy the abyss that stretched to the west over the Euphrates River and into the desert.

Something cracked in the darkness. O'Neal clutched his machine gun and squeezed it against his shoulder. His knuckles went white as the weapon trembled along with him. The weapon was oriented toward the rear of the Humvee, not toward the bump in the night. Sergeant Mendoza had told him to keep his machine gun pointed down the road in case some Iraqi decided tonight was the night to drive around after curfew hours. The stacked razor wire along the roadside would ward off any threat to their flanks; at least that was what Sergeant Mendoza had told him.

O'Neal looked toward the other Humvee parked fifty yards down the road. The other Humvee watched over an enormous bomb crater at the nearby road intersection. Insurgents had blown a hole, six feet deep and twenty feet wide, in the intersection, which made logistics efforts along one of the few paved roads in this part of Iraq a lot harder than they already were. Brigade promised engineers would be out after dawn to fix the road, but someone had to baby-sit the crater until the engineers arrived. The insurgents had a nasty habit of planting bombs where they knew the engineers would work.

So the two Humvees would sit where they were until the engineers showed up and probably stay there until they finished the repairs. At this rate he'd get back to the patrol base for a long-overdue shower by next never.

He ran a trembling hand over the ammo links leading into his M240 machine gun, then keyed the walkie-talkie attached to his armor. "Hey, Ellridge. Time to change sectors of fire."

No response from the other gunner.

O'Neal cursed under his breath. If Ellridge had nodded off, there would be hell to pay when Sergeant Mendoza found out. He thought for a moment, then figured out how he could help his buddy.

O'Neal pushed aside the strap that served as his turret seat and squatted next to Specialist Brown, who was fast asleep while wrapped in a poncho. After a quick glance around the Humvee, O'Neal realized he was the only one awake in the vehicle. He shook Brown's shoulder until the Soldier awoke with a snort.

"I can't get Ellridge on the radio...The batteries in his radio might be dead," O'Neal said, giving a more palatable reason for Ellridge's silence than being asleep at his gun.

"Call him on the platoon net. It's too cold to get out," Brown whined.

"If I call him on the net, Sergeant Young will think we're sleeping out here and dick-stomp us the moment we get back inside the wire," O'Neal said.

Brown rubbed the sleep from his eyes and sighed heavily. "You go. I'll take the gun for a bit. I bet your legs need a stretch," he said as he freed himself from his poncho.

Ellridge's Humvee burst with white light. The force of the explosion cracked the windshield on O'Neal's vehicle. O'Neal's driver and Sergeant Mendoza snapped awake to the nightmare of a burning Humvee right in front of them.

O'Neal stared, dumb struck, at the carnage in front of him. Dark figures ran between him and the burning Humvee. It took a blow from Brown to jolt him into action. O'Neal struggled back into the turret and immediately ducked back into the vehicle as bullets snapped over the top of his turret and struck the armored sides of his cupola with hammer blows. He fell on his ass, staring as green tracer rounds zipped through the sky above his turret like falling stars.

Now that he was faced with actual danger, O'Neal's fear was gone. He pushed himself up to a crouch and waited for a lull in the enemy's fire so he could get back to his weapon. A round smacked into the ballistic glass of a door, creating an instant spider web of cracks. Through the cracks, O'Neal watched as a bulbous shape made of shadow and nightmare shuffled to the Humvee.

Something smacked against the inside of the turret and tumbled into the crew compartment. A plastic pipe with metal end caps spun in the air in front of O'Neal's face as he tried to catch it. He fumbled the pipe, sending it into a vacant seat. He reached for the pipe as Brown screamed, "Get it out! Get it out! Get—"