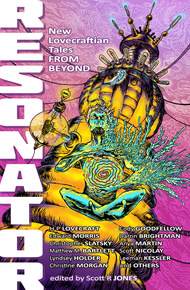 Scott R Jones is a writer, editor, spoken word performer, mostly unintentional comedian, and naturalized sorcerer living in Victoria BC Canada with his wife and two frighteningly intelligent spawn. His fiction and poetry have been published in Innsmouth Magazine, Andromeda Spaceways Inflight Magazine, Great Jones Street, and others, as well as a few anthologies and podcasts. He was once kicked out of England for some very good reasons.

RESONATOR: New Lovecraftian Tales From Beyond by Scott R Jones

In his classic story From Beyond, H. P. Lovecraft introduced the Tillinghast Resonator, a monstrous device that stimulates dormant sense in man, opens up unseen world to unsuspecting eyes, and calls through terror and ecstasy from a realm far beyond our mundane perceptions.

In RESONATOR: New Lovecraftian Tales From Beyond, you'll meet the men and women who dare to pull the switch, for profit, pleasure, and peril. Thrill to the creatures (mindless and horribly sentient) that are revealed in wave after wave of uncanny radiation! Turn on the juice, brace your pineal gland for some unprecedented growth, and prepare yourself to go BEYOND with seventeen stories by some of the best writers working in Weird Fiction today.

Lovecrafian science fiction is represented by these riffs on Lovecraft's classic "From Beyond"—the invisible becomes visible, and the cosmic occult is revealed in extreme fiction by Anya Martin, Scott Nicolay, Leeman Kessler, and other up-and-comers. – Nick Mamatas

The moonlight seeping through the dingy windows dwindled and died. The warehouse loft was enfolded in a gray void, but within, the air itself seemed to glow with a nacreous, magenta light. The resonator's hum became a sinusoidal cascade of chimes when all the other electronics shorted out and stopped dead. Distorted by rippling currents like heat mirages in a desert, the room seemed to rot away, and a host of shadowy shapes swam through the ghostly walls. By strangely layered turns, the room became like the floor of a pre-Cambrian sea, as the phantasmal shadows took on a terrible solidity.

Great whorled nautiloids floated past, regarding them with lambent spotlight eyes. Razor-winged lampreys slithered towards them, gulping the ionized air and groping with manifest eagerness for Shirley's white body, only to dart away as if electrified. Arachnids with far too many legs clung to each other and stalked their prey with scimitar antennae longer than their bodies. Their victims, drifting neon jellyfish that circled like moths around the resonator's tuning fork array. And still more and stranger forms swarmed into the feeding frenzy, too alien to register, even to his enhanced mind, as more than spectral distortions of the light and momentary pulses of utterly foreign ecstasy.