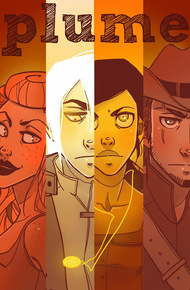 K Lynn Smith is an artist and writer from the Mid-Michigan area. In 2006, her artwork won the Michigan Press Award, as well as the Helen Victoria Haynes World Peace Cartoon Contest.

She is the writer and artist of the western webcomic PLUME, published by Devil's Due Entertainment, and has been involved with projects such as GARFIELD, Bill Willingham's LARK'S KILLER, the Strength in Numbers Studios's video game, TUEBOR, and the upcoming superhero series HOPE.

Plume is a western adventure about Vesper Grey and her supernatural (and reluctant) guardian Corrick. On their way to recover some stolen artifacts, they start to learn the gritty truth about the past and how far they're willing to go to amend it.

Started in March 2011, Plume is now read in over 70 countries, translated in three languages, and gets around 30,000 unique visitors a month.

Explore the weird west K Lynn Smith's Plume. Vesper Grey and her handsome guardian Corrick go seeking vengeance and magical artifacts, only to find way more than they bargained for. Witty, action packed, and even a little bit sexy, Plume's a one of a kind and impossibly stylish revenge tale. – Simon Watts