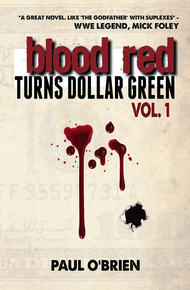 PROCTOR KING nervously watches the show on TV, wondering why his fuck-up of a son does not already have the world heavyweight championship belt in his grasp. Arranging this match has taken PROCTOR four years of pay-offs, double dealing and bone-breaking to arrange, and if all that effort has been wasted then he might just have to take him a business trip to New York.

Melvin Pritchard was a golden gloves state champion. He could dance and jab all day and all night if he was allowed. He wasn't a violent man in any sense of the word, but he loved to box. The majesty of it. The strategy. The competition.

When he got married and opened his practice, he volunteered to work the corner for all the up and coming local kids.

Dr. Pritchard was always there in their ear calming them down. Walking them through what was unfolding in the match.

He was a student of the game and tried his best to pass that on to any young mind that would take it.

He put his own two sons in the ring as soon as they could stand unaided. Their whole relationship was based on the theory of a great fight.

They would talk about it at dinner and practice it before bed. Melvin spent more time with his sons than any other father in New York. He did so because they were linked by more than duty.

When his two boys got older and moved away, Melvin found that he didn't have much else in common with his boys. He didn't like using telephones anyway, and they didn't seem to keep up with the boxing world now that they were married and working.

Melvin just carried on finding new people to teach and train. It was what he did his whole life. And what he hoped to do even more now that he was instated as the Chairman of the New York Athletic State Commission.

He was effectively responsible for the laws and policies of the boxing world in New York. Well, boxing and wrestling, which also had attached to it its embarrassing cousin: professional wrestling.

"Come in, Danno," Melvin offered as he held open his office door. Danno entered the office with his hat in his hand and took a seat at Melvin's direction.

Melvin took his seat. "Are you a religious man, Danno?"

"Well, then he mercifully died after three weeks of intense pain due to a cancerous system that took over most of the top half of his body."

Danno tried to remember how to cross himself the right way. He failed.

"What can I do for you...?" Danno purposefully left his request open so Melvin would step in with his name. He didn't. He instead opened the brown file in front of him.

"I was sorry to read about your car," Melvin said.

"Any clue as to what happened?"

"No. But it wasn't anything as dramatic or sinister as the paper made out."

"Do you mind if I...?" Melvin asked as he thumbed through the file's contents. "There's a world of interesting reading in here."

Melvin cleared his throat. "It seems that our two sides have crossed many times over the years, Danno. Can I call you Danno?"

Danno nodded and opened his jacket button. Melvin continued. "April 1910. A Federal court convicts John C. Maybray, Joe Carroll, Bert Warner, and other wrestlers and promoters, of using the US mail to illegally rig the results of wrestling matches."

Melvin continued to read. "I'm sorry; it's just I'm new to this job and I was going through the business of the commission here and some of these..." Melvin follows a passage with his finger. "1934. January 2nd. The New York State Athletic Commission investigates 'secret agreements' and 'title juggling' in wrestling at a January 9th hearing. After the witnesses testify, the New York State Athletic Commission says, in a statement: 'We have heard all the testimony. We have sent it out to be translated into English. When that is done, we will consider it.'

Danno knocks Melvin's desk in the hope of lifting his eyes from his file. "Is there something I can do for you?"

"I can't be responsible for what he did or didn't do."

Melvin sat back into his chair. "Am I supposed to believe that what you promote, Mr. Garland, is legitimately sporting?"

"Is this an official meeting?"

"Well then, I'll see you when it becomes such."

Danno nestled his hat back onto his head as he stood. "You have a look at the cover of this week's Sports Illustrated, and check out my heavyweight champion. Then tell me if we're legit or not."

Danno stopped and turned back.

"I don't want anything other than an honest answer. Then we go quietly from there."

Danno pointed to the mounted picture behind Melvin. "I will put up ten thousand dollars that five of those boxers couldn't last ten minutes with any of my guys."

Melvin cut Danno off, "That's not what I asked you."

"We are one hundred percent more honest than fucking boxing," Danno replied as he turned and exited Melvin's office.

Melvin picked up his file and continued to read to himself.