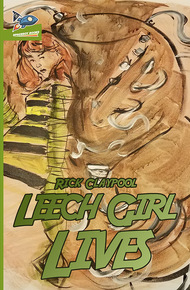 Rick Claypool lives in Pittsburgh and works as a researcher for a nonprofit dedicated to fighting corporate power. He grew up in a small struggling western Pennsylvania factory town. He has worked as a reporter, a home health care worker, an adjunct professor, a first-person history interpreter and a grassroots organizer. He has a master's degree in Popular Culture Studies.

Inspector Margo Chicago is the smartest, surliest art safety inspector in the Bublinaplex, and things aren't going her way. The guy she thinks she's in love with has been banished. Her boss has been poisoned. Her cyborg has a limp. Oh, and her arms have been devoured and replaced by a pair of enormous leeches.

Is it a futuristic dystopia? A takedown of Manic Pixie Dream Girls? A humorous parody of superhero narratives? Yes. Yes it is. I enjoyed this book greatly—when I blurbed it I described it as minimalist China Mieville. You're in for a treat. – Nick Mamatas

On a computer monitor, Margo saw a commercial for a new exhibit coming to the Museum of Genius. The commercial pissed her off. She hurled her yarn and crochet hook down to the floor and shouted at the screen.

The screen was also the face of Margo's cyborg. Like all cyborgs it had a box-shaped computer monitor head with a screen where its face should be. The rest of its body was a modified human body covered in a skin of black plastic. In response to Margo's shouting, the cyborg backed away a little.

Today was the one-year anniversary of the day the guy Margo thought she might have been in love with was banished from the Bublinaplex. His name was Dr. Jasper Bearden. The Administration had found him guilty of High Recklessness. Margo thought that was bullshit.

Sometimes when she closed her eyes she could still hear the abrupt shriek he'd let out when the black pit opened under him. A second later, he was gone forever.

The Administration said people died because of what Jasper had done. Margo disagreed. Not about whether people died—people definitely died—but about it being Jasper's fault.

So today on the anniversary of Jasper's banishment she was determined to do nothing but mope around alone while watching dumb stuff on her cyborg's monitor. She would eat ice cream and get drunk on straight vodka. She would pass out by two o'clock and wake up feeling disgusting around seven. She would watch a stupid movie while eating buttered noodles and waiting for the headache pills to kick in. Then she'd consider combining the pills and the vodka. And she'd wear her pajamas all day.

It was supposed to be a pointless, wasted day.

The commercial ruined everything.

In the commercial the Executive Designer's head took up her cyborg's whole screen-face. The Executive Designer—whose name as far as anyone knew was simply "Fash"—was a thin old man with unruly white hair and a narrow jaw studded with white stubble. He had a pinkish complexion Margo disliked, mostly because it reminded her of her own ruddy skin. He was the chairman of the Administration. He did these commercials when he wanted to tell citizens of the Bublinaplex something important was happening.

The installation of a new work of art in the Museum of Genius was a momentous occasion in the Bublinaplex, where society was centered around the creation and appreciation of art. It was said that humanity's capacity for imagination was what had enabled humanity to survive. History's most significant works of art were on permanent display.

Executive Designer Fash's dark eyes widened on the screen and he said the work of art being added to the Museum of Genius was an installation by Lorcan Warhol.

That was when Margo flipped.

Lorcan Warhol was the author of the Recklessist Manifesto. He inspired a whole school of art that was devoted to making unsafe art.

By day, Margo was Inspector Margo Chicago, the Art Safety Inspector who had a way of staring down those who got in her way.

Art Safety Inspectors existed because of the Administration's policy of taking extreme precautions to protect the citizens of the Bublinaplex—the last surviving human population in the world—from harm.

Until the Recklessists came along, the Art Safety Department's job consisted mostly of requiring wobbly, unbalanced sculptures to be secured so they wouldn't collapse onto anyone. Then the Recklessist Manifesto claimed safety was oppressive. Recklessists started making art designed to stab viewers in the throat, burn off their toes, poke out their eyes—or worse.

Artists making such things thrilled people who were bored with safety and terrified the Administration.

Except now, with a Lorcan Warhol installation coming to the Museum of Genius, the Administration seemed to be giving Recklessism its stamp of approval.

"End broadcast," she said to her cyborg. Its screen-face went blank.

Seconds later, O'Keefe's face filled her cyborg's screen-face. O'Keefe was bald with an orange moustache and a short goatee. He was Margo's boss and second in command in the Department of Art Safety.

"What's happening?" he said. "I'm busy, but show me a crab mandible and I'll open a pumpkin."

O'Keefe was always saying things that didn't make sense. Margo figured this was his creative pursuit. She didn't judge. Her creative pursuit was crocheting little plush extinct creatures, mostly cats. For a minute she forgot what she wanted to say.

"You called for a reason?" O'Keefe said.

"The Executive Designer was on a commercial just now. Did you see it?"

"Did you know Lorcan Warhol is putting up an installation in the Museum of Genius?"

"Why didn't I know about this? Why am I not handling the inspection?"

"Too risky," he said. "Too risky for you or for anyone else."

"So you're handling it yourself then?"

"I don't know what that means."

"It's a kind of alignment of celestial bodies—"

"Nope, still don't get it," Margo interrupted. "Does it mean yes?"

"Where are you in the process? Have you met with Warhol? Have you been to the construction site?" O'Keefe sighed, "Again, I'm very busy. Construction has only just barely begun. The same is true of my inspection." A finger entered the screen and he itched his nose. "And no, I have not yet met with Warhol or visited the site."

Margo couldn't stand it. How could she waste her day wallowing in self-pity while O'Keefe did nothing about Warhol building a monument to Recklessism in the Museum of Genius, the museum that displayed only the greatest art, art that was supposed to define eras and outlast generations?

"Give me the assignment," she said. "I'm not doing anything."

"Too risky," he said again. "What if you miss something?"

"If I miss something, someone might die and I will probably be banished," she said. "Then you can teach someone new to do the job better." She paused. "Please?"

O'Keefe gave in. "Come to the office," he sighed.

Margo hung up with O'Keefe and got dressed. For work she wore her Art Safety inspector uniform, a yellow button-up shirt and pants with diagonal black stripes. Before she left she glanced at the photo of Jasper by her bedside. Photography had been his creative pursuit. His wide-spaced eyes seemed to stare off at something above and behind her. His narrow nose and pursed lips were frozen in a crooked expression. He looked as if he was about to sneeze.

On her way out, Margo glanced at the bottle of vodka and the white container of headache pills on the counter.

The cyborg followed her out and closed the door behind her.