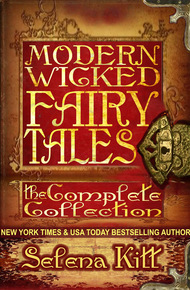 She can be reached on her website at www.selenakitt.com.

"Most people go to Brazil to work on their tan." Goldie sighed, watching Campbell use his iPhone to bypass the alarm system. She kicked at a Styrofoam cup in the alleyway, startling a cat—or a really big rat—behind a dumpster. It bolted in the darkness and her heart jumped in her chest in spite of her outward calm.

"We can do that later." He glanced up at her and then nodded at the door. "It's all yours."

"Promises, promises." She unholstered the drill out of her belt like a six-shooter, making quick work of the bolt. No alarm went off. The cameras on the side of the building had already been disabled, thanks to Campbell. "Is there a night guard?"

"Nope." He swung the door wide and they went into the back entrance of the bank, down a dark hallway lit red by the emergency exit light behind them. "Yet another oversight."

"You know, a lot of people go on their honeymoon in Brazil," she suggested hopefully.

"The safe?" She could feel it, could almost taste it, heavy gauge steel, lever like a roulette wheel waiting to be spun—everyone place your bets, who's going to get lucky tonight? But Goldie didn't need luck.

"Through here." Campbell was playing with his phone again, glancing up at the security cameras. The red lights on them were off.

Goldie drilled through another door, this one with two bolts. She heard the secondary locking mechanism at the bottom and swore under her breath.

"They got a backup," Goldie warned him, already feeling around on her belt. She found what she was looking for, pulling out the hand-held plasma saw.

"You know I love my toys." She smirked, grabbing her goggles off her belt and pulling them on. "Step back."

He did as he was told, getting out of her way as she pressed the trigger, waiting for it to spark. She was through the secondary lock in less than ten seconds and Campbell pulled the door open, revealing the vault room behind it.

"Pretty." Goldie pulled her goggles off to get a better look. "Dual combination. I assume it's on a timer?"

She approached the vault with reverence, touching her gloved palm against the surface. Could she do it? She'd had the opportunity to crack a dual combination lock only once before, and that had been in the light of day with the head of banking security breathing down her neck.

"Time me?" She grinned over her shoulder at him, taking her gloves off so she could feel the combination dial in her hand.

"Sure." He fussed around with his iPhone again. "On your mark…get set…go!"

She closed her eyes and started turning the dial, hearing her father's voice in her head—just line up the gates under the fence. It's easy as one-two-three. Well, in this case, four. It was a four digit combination lock, and there was a twin right next to it with a different combination waiting to be discovered.

All combination locks were a set of wheels. All you had to do was line up the notches on the wheels with the contact points and you were in. Of course, with a four-digit combination, there were ten thousand possibilities, and this little gadget couldn't be hacked with a computer. Goldie didn't use sound-enhancing equipment or earphones. She used what her father had taught her, along with just her ears and her hands.

"Got the first one," she muttered. Her fingers just seemed to "know" or "see" where the wheel was. She'd always had an incredibly sensitive sense of touch. Even her father had been surprised when she had started to surpass him in her ability to crack a safe. It was a little like flying once she really got into the zone, working the lock around, back and forth, slowing as she neared the sweet spot, and then—ahhhhh, such a lovely jolt when she found it.

"Got the second." It didn't hurt that her memory was like a steel trap. She could hear Campbell's breath beside her, smell the Altoids on it—curiously strong, cinnamon and sweetness.

"Three minutes." He sounded excited, but he always was when they were on a job. He loved watching her work, even though it always felt like a competition. She didn't know why he worried about it. There was no man alive who could do what he did. He could hack anything, bypass any electronic system ever made, usually just from his modified, jailbroken iPhone, but he couldn't do what she did and he admired her for it. He truly appreciated those things he wasn't good at. She liked that about Campbell.

"Third one." She redoubled her efforts, nearing the end now. For some reason, the first number came easy, but last was always the most difficult. Slowing her motions, she focused, concentrating hard, her tongue sneaking out to touch the corner of her mouth. Her father used to tease her that she was going to bite it off some day.

"Four minutes. Damn. What did you do the last one in?"

Goldie turned the dial, searching for the sweet spot. "Six minutes and eight seconds." And she found it. "Got it."

"Got one more to go." She moved to the second combination lock and started working it. It was all the way at the other end of the door, far out of reach of the first. This safe required two people to open both locks at the same time, an added security measure. She got the first number right away, unmindful of the time. This was just another job, another lock to crack open. The second and third came almost back to back, the notches lining up and falling like dominoes. And again, it was the last one that tripped her up, forcing her to focus her efforts, making that final release an exhilarating thing, leaving her breathless as she turned to Campbell.

"Woo!" His eyes were bright. "You did two of them in six minutes and forty-seven seconds!"

"Write them down." She rattled off the combinations and he punched the numbers into his iPhone. "We have to do it together or it won't work, and we only get one shot."

"I know." He leveled her with a withering look and she grinned, hand still on the dial. Campbell turned the other combination lock to zero it out and she did the same. He glanced at his iPhone, reading off the numbers to double-check the combination.

"Ready?" she prompted, eyeing the silver vault wheel with anticipation.

"Go." He started turning the dial and she did too, both of them focused intently on doing it correctly. They waited anxiously when they'd finished, stepping away from the vault, and saw the light at the top go from red to yellow. There was a green one next to it that hadn't lit up yet.

"How long do we have to wait before we can open it?" she asked, referring to the timer that was set the moment the light went yellow. The green one would go on after the allotted time.

"That's it?" She pouted, already unhooking her tool belt, letting it drop to the floor. "How many times can you make me come in twenty minutes?"