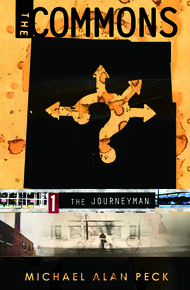 Michael Alan Peck tells tales big and small. Life's magical, but it isn't always enough for a good story. So he makes up the rest.

He's made his living writing about TV, its celebrities, and its past. He's also put food on the table reviewing restaurants and writing about travel.

He has a godawful memory, so he focuses on the written word. He likes to think that over time, he's gotten better at it—the writing, not the remembering. He forgets important dates. He's pretty good with movie lines. But after several years, he tends to tweak them. He prefers his versions over the real ones.

Funny goes a long way with him. Probably further than it should.

He grew up outside Philadelphia and has lived in New York, L.A., and San Francisco. His current home base is Chicago.

The Commons - Book 1 - The Journeyman by Michael Alan Peck

Awarded the AIA Seal of Excellence and an indieBRAG medallion

"Paul Reid died in the snow at seventeen. The day of his death, he told a lie—and for the rest of his life, he wondered if that was what killed him."

So begins the battle for the afterlife, known as The Commons. Taken over by a brutal corporate raider, it's an imaginary landscape of a broken America—overrun by the heroes, monsters, dreams, and nightmares of its imprisoned dead.

Three people on a bus to nowhere: a New York street kid, an Iraq War veteran, and her special-needs son. They are the last hope for The Commons. Along for the ride are a shotgun-toting goth girl, a six-foot-six mummy, a mute Shaolin monk with anger-management issues, and the only guide left to lead them.

Three Journeys. One mission: to save forever. But first they have to save themselves.

The first appeal for me here was the absolute economy of scenes, and how brilliantly they supported each other to introduce a rich and believable cast of characters. As a result, Peck is able to get to the main crisis very quickly, but at no time feeling rushed about it. The second appeal was the premise. Lots of writers have tackled the "life after death" story, but this was something fresh. Not just a battle between the forces of Good and Evil, which Evil appears to be winning, but one in which Good doesn't even seem to give a damn? Count me in! (Read the full IOD Report.) – Jefferson Smith

"How fast are you going?" June Medill asked the bus driver, leaning sideways to check the speedometer.

June Medill had asked the driver about his speed many times in the hours since the bus commenced braving the storm. Paul figured the driver would ignore her at some point—or tell her to shut up. But June Medill was tough to tune out, and she didn't seem the type to listen to others anyway.

Paul, Annie, Zach, and everyone else knew June Medill's name because when she'd boarded, she told the man sitting behind the driver that he was in the seat reserved for Medill, June. She'd told him loudly, and she'd upped the volume when the driver said that the bus line didn't issue assigned seats. She'd been just as audible when pulling out her cell phone and threatening to call Port Authority and New Jersey Transit to complain.

The driver had pointed out that they were not on a New Jersey Transit bus, but the man in the seat got up and moved in order to keep the peace. That freed June Medill to hector the driver as he guided the motor coach through curtains of snow at a safe crawl, though not a crawl safe enough for June Medill.

Near the middle of the bus, Paul watched the storm stream across his window. Passing headlights illuminated veins of ice on the glass, lighting up a tag someone had scratched into it: "IMUURS."

Another tagger had claimed the back of the seat in front of Annie, across the aisle, in silver-paint marker. Paul tried to read it, but couldn't make out the words as the headlights washed across them. Maybe it was the bad angle. Maybe it was June Medill.

Annie had given up trying to read to Zach over June Medill's interrogation about a half-hour in. Instead, she leaned close and murmured to him while he stared at the graffiti on the seat back as if he were able to read it.

"Normally, I wouldn't make such a big deal," June Medill said. Paul was certain that wasn't so. "But it's coming down so hard. Don't you think it's hard?"

"Everything's hard with you yammering," the driver said, angling forward to peer through the powdered arcs cleared by his wipers.

Paul switched on his overhead light and rummaged through his pack for his iPod, last year's holiday donation. He pulled out socks, snacks, rolled-up shirts, his notebook, and other items, and piled them on the seat next to him. He'd packed in a hurry. Nothing was where he remembered putting it.

He wanted to listen to something other than the chatter up front, and he was sorry that Annie had quit reading. Her soft voice and the tale of the traveling girl reminded him of story hours with his mother—a long, long time ago and far, far away. He couldn't recall much about Jeanne Reid other than the yarns she spun, which starred heroes named Paul who always succeeded in doing right.

"Are you going to the Gaia festival?"

Annie held his notebook, which had fallen off the adjacent seat, along with a pamphlet and a photo from its pages.

"Not until summer," he said.

"You're going to San Francisco to see family, then, or is this your girlfriend?" She studied the worn snapshot.

"Now I'm prying. Never mind. It's just that I like to sneak into the world of boys so I can be prepared for when he's older." She ruffled her son's hair.

Zach scrutinized the tag on the seat back. From what Paul had seen of him, he might never be like other boys. Which might not be the worst thing, given what boys were capable of.

For instance, they abruptly left behind those who helped them. But that didn't matter, right?

"It's okay." Paul didn't like anyone handling the photo, which he'd examined so often and for so long that he could see it in his own mind with little effort. A young woman in a crowd, her hair the same shade of red as Annie's, looked back over her shoulder, caught before she could pose, as if someone had spoken her name. On her left hand was the ring Paul wore now.

"Very pretty. When was this?"

"Are you staying with her?"

"No. She's not—" He didn't want Annie to feel bad or, worse, feel sorry for him.

"I ask way too many questions," she said.

If it had been June Medill, it would have been too many. But Paul was pleased that Annie wanted to know even one thing about him.

She handed him the photo and the notebook, then switched on Zach's light and gave the boy a few crayons. The process required some negotiating before he had colors he liked, but he soon settled into drawing on the page from Paul's notebook.

Paul steered the subject back to Gaia, an arts-and-culture festival held in the Nevada desert every year. He hoped that Annie might understand why he'd want to go to it, unlike most of the other New Beginnings kids, who didn't.

"This was taken at the very first one," he said of the snapshot, holding it like a charm to ward off the danger of him saying something stupid. "She told me it was one of the happiest times of her life."

"That was nineteen ninety-six?"

"So she tried to explore a little bit before settling in with a baby."

"I don't think she had a plan. She was there to find one. That's where she met my dad."

"And he wants you to go there now?"

Her eyes shone when she smiled. "Sorry. Too many questions."

She did understand. Paul was sure of it. "I'm closing the circle," he said. "I need to go there to figure out who I am."

Up front, June Medill demanded to know how it was possible that they hadn't yet passed the Delaware Water Gap. The driver said he thought the problem was going too fast, not too slow. June Medill told him that too many people drove while talking on the phone.

"This is already some trip," Annie said, listening to them. "I'm guessing we both know about traveling, Paul."

Later—much later—he would wonder why he had.

They hadn't known a thing.

Bomp-bomp-bomp-bomp. The thud of Paul's earbuds provided a backbeat to the bus's plodding progress through the landscape of otherworldly white.

Outside, a man stood by a snow-carpeted car that looked like it had slid off the interstate. He watched the bus as it passed. Paul blinked, his eyes heavy. The car's trunk was angled up higher than its hood; it wouldn't be going anywhere without a tow.

A blast of wind coated the window with powder. By the time it cleared, the man was gone. After that, Paul couldn't be certain he'd been there at all.

June Medill and the driver invaded the rhythm, cracking through it, waking Paul. He hadn't felt himself falling asleep.

Across from him, Zach and Annie dozed, the boy's head in his mother's lap. The notebook page and the crayons lay in the aisle.

Paul picked them up and turned Zach's drawing over. It wasn't a drawing.

It took effort to read the boy's scrawl—the letters were more like shapes than language—but it was the tagged phrase from the seat back: "Unus pro omnibus, omnes pro uno." What was weirder: that someone tagged a bus seat with such a thing—or that a five-year-old worked so hard to copy it down?

Paul tucked the paper and crayon into Annie's bag. She didn't budge.

Taillights passed the bus on the left—way too fast for the conditions. The veins of window ice flashed red, like lightning, flagging the recklessness. So did the scratched-in tag. IMUURS.

"I'm only trying to help," June Medill told the driver.

"Look, you leave me alone from here on out, and maybe I won't have you arrested when we get there, all right?"

He turned around to glare at her. "What?" He'd reached his limit.

The windshield glowed with the red of the passing car, framing the driver in crimson frost as he turned his attention back to the wheel. Then the red went sideways, replaced by the blue-white of headlights as the car spun out in front of them. The lines and shadows of the bus's windshield wipers swept through the glare.

The light grew brighter. The driver stomped on the brake pedal.

Something hit Paul very, very hard as shapes filled the white. A flash of a question. When had the fight started?

It hit him again. Cries from all around. Bang.

Some trip, Annie had said. But he didn't care, right?

Bright, bright light. Too much.

All was light as the snowy windshield blazed at him in lines of hot stars.

The bus imploded into white.