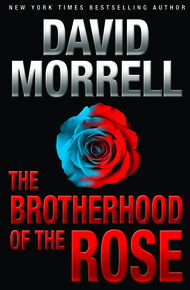 David Morrell is the critically author ofFirst Blood, the novel in which Rambo was created. He holds a Ph. D. in American literature from Penn State and was a professor in the English department at the University of Iowa. His numerousNew York Timesbestsellers include the classic spy novel,The Brotherhood of the Rose(the basis for the only television mini-series to be broadcast after a Super Bowl). An Edgar and Anthony finalist, a Nero and Macavity winner, Morrell is a recipient of three Bram Stoker awards from the Horror Writers Association and the prestigious Thriller Master award from the International Thriller Writers organization. His writing book,The Successful Novelist: A Lifetime of Lessons about Writing and Publishing, discusses what he has learned in his more than four decades as an author. His latest novel is Inspector of the Dead which has just been published in hardcover.He lives in Santa Fe, New Mexico.

Brotherhood of the Rose by David Morrell

They were orphans, Chris and Saul—raised in a Philadelphia school for boys, bonded by friendship, and devoted to a mysterious man called Eliot. He visited them and brought them candy. He treated them like sons. He trained them to be assassins. Now he is trying desperately to have them killed.

Spanning the globe, here is an astonishing novel of fierce loyalty and violent betrayal, of murders planned and coolly executed, of revenge bitterly, urgently desired.

Morrell is a master of the thriller, Father of Rambo, and this is one of his absolutely best novels, chilling stuff. – Steven Savile

A MAN OF HABIT

The snow fell harder, blinding Saul. He skied through deepening powder, veering sharply back and forth down the slope. Everything—the sky, the air, and the ground—turned white. His vision shortened till he saw no more than a swirl before his face. He swooped through chaos.

He might hit an unseen tree or plummet off a hidden cliff. He didn't care. He felt exhilarated. As wind raged at his cheeks, he grinned. He christied left, then right. Sensing the slope ease off, he streaked across a straightaway.

The next slope would be steeper. In the white-out, he pushed at his poles to gain more speed. His stomach burned. He loved it. Vacuum. Nothing to his back or front. Past and future had no meaning. Only now—and it was wonderful.

A dark shape loomed before him.

Jerking sideways, Saul dug in the edge of his skis to stop himself. His pulse roared in his head. The shape zoomed past from right to left in front of him, vanishing in the snow.

Saul gaped through his goggles, hearing a scream despite the wind. He frowned and moved cautiously toward it.

Shadows gathered in the storm. A line of trees.

He found the skier sprawled against a tree trunk, flanked by blood in the snow. Beneath his mask, Saul bit his lip. He crouched and saw the crimson seeping from the skier's forehead, and the grotesque angle of one leg.

Saul couldn't go for help—in the chaos of the storm, he might not be able to find this place again. Worse, even if he did manage to bring back help, the man might freeze to death by then.

One chance. He didn't bother attending to the head wound or the broken leg. No use, no time. He took off his skis, removed the skis from the injured man, rushed toward a pine tree, and snapped off a thickly needled bough.

Spreading the bough beside the man, he eased him onto it, careful to let the good leg cushion the broken one. He gripped the end of the bough and stooped, walking backward, pulling. The snow stung harder, cold gnawing through his ski gloves. He kept tugging, inching down.

The man groaned as Saul shifted him over a bump, the snow enshrouding them. The man writhed, almost slipping off the bough.

Saul hurried to reposition him, tensing when he suddenly felt a hand behind him clutch his shoulder.

Whirling, he stared at a looming figure, "SKI PATROL" stenciled in black across a yellow parka.

"Down the slope! A hundred yards! A shed!" the man yelled, helping Saul.

They eased the skier down the hill. Saul bumped against the shed before he saw it, feeling corrugated metal behind him. He yanked the unlocked door open and stumbled in. The wind's shriek diminished. He felt stillness.

Turning from the empty shed, he helped the man from the Ski Patrol drag in the bleeding skier.

"You okay?" the man asked Saul, who nodded. "Stay with him while I get help," the man continued. "I'll come back with snowmobiles in fifteen minutes."

"What you did," the man told Saul. "You're something else. Hang on. We'll get you warm."

The man stepped out and closed the door. Saul slumped against the wall and sank to the ground. He stared at the groaning skier, whose eyelids flickered.

The man winced, nodding. "Thanks."

Scrunching his eyes in pain, the man said, "Massive foul-up."

"Didn't figure on the storm." The man scowled, his temples pulsing. "Dumb."

Saul listened to the storm, soon hearing the far-off roar of snowmobiles. "They're coming."

"Did you ever ski in Argentina?"

Saul's throat constricted. Babbling? Hardly. "Once. I got a nosebleed."

The roar grew louder as the snowmobiles stopped outside the shed. The door jerked open. Three men from the Ski Patrol stepped in.