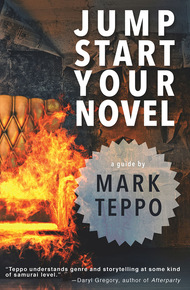 Mark Teppo is the author of more than a dozen novels, ranging across a number of genres. He lives in the Pacific Northwest, where he shuffles books around on shelves in an endless effort to find more space.

He's also the publisher of Underland Press, an independent press that focuses on the strange and weird in crime, horror, and fantastic fiction, where he is curating the Underland Tarot, a series of anthologies that will encompass the Major Arcana of the Tarot.

You may find him online at http://www.markteppo.com

What's the easiest thing about being a writer? Sitting in a chair!

What's the second easiest thing about being a writer? Putting your hands on a keyboard!

What's the hardest thing about being a writer? Making words come out of your brain!

It doesn't matter if you've just started thinking about writing a novel or have done a dozen of them; getting started on a new project is always the hardest part. That's where Jumpstart Your Novel saves the day. Inside this book, you'll discover a technique that will help you outline an entire novel in a little under two hours. That's less time that it takes to sit through a movie (with previews), get across town in rush hour traffic, or vacuum your cat!

Using a simple Nine Box Model, you'll organize your thoughts so effectively that brainstorming a novel will seem as simple as following the directions on the back of a box of cake mix. Idea stacking, plot spinning, pants wearing: all of these tools will be at your disposal as you settle into that writing chair and start your brain fire!

Mark Teppo and I are connected by several intersecting orbits of mutual writer friends, particularly the circle extending from WMG publishing. I first got in touch with him for last year's Holiday Fantasy StoryBundle, where I featured his delightful tale of Rudolph. This time, he offered his practical and inspirational book on how to Jump Start Your Novel. What could be a more perfect title for NaNoWriMo participants to get started? – Kevin J. Anderson

There are two generally held schools of thought in regards to how to write a book: making things up as you go (the pantser model), or following a very strict outline (the plodder—er, the plotter—model). Neither is better than the other. Really. I know this is going to disappoint some of you who were hoping they held one of the key secrets to writing. Pansting isn't it, sorry. Plodder isn't the magic bean, either.

Here is a secret, though: You may switch from being one to the other over the course of your writing career. It's not quite the same as switching from one diametrically opposed political party to another or making the switch from beer to wine or to harder spirits. It's more like admitting to yourself after years of drinking coffee that you really don't like the acrid taste, and you're going to switch to tea. Hallelujah! Confetti from the sky! Rainbows smacking you in the eyeballs!

Sure, you have to break the news to your three friends who all chipped in to buy that Clover machine that you're sharing between households, and they'll probably stop talking to you for several months until they realize that they only have to share the machine with two other people instead of three, but honestly? Your stomach lining is no longer revolting, and that nasty twitch in your left hand that had been causing a number of double 'e' and 's' characters in your manuscripts has gone away.

And six months from now, one of the other three will accidentally have tea when he's at your place, and he'll confess that he liked it and could you recommend some varieties he might want to stock at his house for when you visit? And you'll be kind and write the names down— without a twitch of self-righteous validation—and then you'll give him a hug because you know the tea isn't really for you, but change is hard, and none of us should have to do it alone. Even though you did, and those ungrateful a**holes totally shut you out during the first months when you woke up in the middle of the night—the sheets soaked with sweat, your mouth dry and head pounding, and your hands fixed in claw shapes. Shaking from coffee withdrawals.

Like I said, it'll happen once—maybe twice—during your writing career. And it's okay that it does. It probably means you're growing as a writer or some other nonsense.

Do pansters really make it all up as they go? No. Well, yes. But no. They don't plan ahead. At least, not very far ahead. They like to allow a book to grow organically. They don't worry overmuch about structure and what the ending is going to be or whether the boy gets the girl or the girl gets the other girl or the boy gets the alien mutt. They just put the characters in an interesting situation, stir, and write down what happens next. Sometimes it works. Sometimes it is a real mess.

I happen to like writing. I don't consider outlining to be writing. I consider it the dull boring slog of playing What if? all day and making notes. And I know that as soon as I actually put the characters in this What if? situation that I've come up with, they're going to have a different reaction than I planned, and all my notes aren't going to do diddly. So I spin them up and get out of the way.

Does that mean that I occasionally spin up a situation that doesn't work out and have to backtrack and start over? Yes, it does. Does that suck? Yes, it does. Am I the only one who does it this way? No, I am not. I'm not going to name names, but a writer of ginormously successful fantasy novels is a bit of a pantser from what I can discern from his conversations about his process. None of his fans are terribly happy about this. I can assure you that he isn't either. But it is his process.