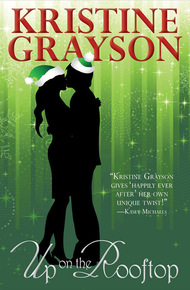 Up On the Rooftop by Kristine Grayson

Julka spends her days inspecting rooftop entrances for the Big Night as part of Santa’s Advance team—a team that includes an annoying elf on double secret forever probation. She hates her job. She wants excitement. She wants to explore the Greater World. She wants romance.

Disgraced former investment banker Marshall spends his days trying to ingratiate himself with neighbors who believe he bears personal responsibility for the Great Recession. He feels guilty. He wants to make amends. He wants to forgive himself.

Then, he sees a pretty woman dressed like an elf standing on a rooftop. He has no idea that entrancing vision will change his life—and hers—forever.

First story in the Santa Series.

“Up On The Rooftop” begins Grayson’s new Santa series and shows why Best Reviews calls her “the reigning queen of paranormal romance.”

Julka stood on the roof, hands on her hips, feet covered in snow. She was tired, she was cold, and she hadn’t felt the tip of her nose in hours. She was staring at yet another fancy-pants chimney, a narrow little pipe sticking up out of a lovely square pile of fake bricks, and she wanted to kick it.

Which wasn’t very festive of her.

But seriously, who felt festive on October 30th? It was New England, for heavens sake. There wasn’t supposed to be snow for another—oh, what? Two weeks? She really didn’t know, except that she had checked the records going back to the 19th century, and never found a snowfall as deep as this one before Halloween. She wasn’t supposed to be this cold for another month, and by then, she should’ve been moving south. Where she would have to deal with freezing fog, sleet, and sheets of ice.

It was her own damn fault that she was standing here. She was the one who had said, I don’t have the skills to run a workshop, but I can find problems and solve them.

And then, of course, she had to go too far, because she always went too far: Besides, I don’t want to stay here for my entire life. I’d like to travel. I need to see the world. I really, really do.

She sighed. When she had said she wanted to see the world, she had hoped she would be placed in one of the many year-round outposts. She would receive toy shipments, interview local children, and make certain that the back-up sleighs were in fantastic shape. She would scout local products and find great toy factories that didn’t even know they would be enlisted.

She had wanted to be one of the Ambassadors for Santa’s massive worldwide operation.

She hadn’t meant that she wanted to be a minion in Entry Access Quality Control, someone who had to view each and every house with children in it for the appropriate entrance. Appropriate, in Santa’s rather medieval mind, always meant a chimney.

She sighed and clutched the tablet to her chest. It was a real paper tablet—one of the millions of Big Chief tablets that someone in Santa’s North Pole headquarters had stocked up on in the 1960s, along with stubby Number 2 pencils that she refused to use.

She wanted an electronic tablet—a gizmo, with bells and whistles and access to the worldwide web (even though, she’d been told, no one called it that any more). The workshop had hundreds of those as well, but not for the elves or the human support staff, but for the tech-savvy children who didn’t want a dolly or a train set, but who wanted the latest in computer gadgetry.

Everyone at the North Pole had to be careful with gadgetry. Many types of magic—particularly fairy tale magic—weren’t compatible with electronics. Elven magic also had difficulty with electronics. Santa always had the Fairy Kingdoms design his systems, and that didn’t always work well.

Delbert popped his head out of the invisible sleigh. She hated the effect. It made him look like he’d been beheaded, and she had gotten stuck with the head part. She wondered what the civilians on the ground saw. Whatever it was, it couldn’t’ve been pretty.

Entry Access Quality Control wasn’t supposed to call attention to itself. That was why the invisible sleigh, which was the same size and shape as Santa’s (only without the reindeer; they hadn’t needed reindeer since 1930 or so, but they kept the reindeer for form’s sake. Besides, the reindeer had a hell of a union).

Delbert usually remained invisible as well. He was an S-Elf, sharing a lineage with Santa. Delbert hated his heritage, and would’ve fled long ago except that he couldn’t hide who he was, no matter how much he wanted to. All those photos of Santa vacationing on the beach, of Santa in Hawaii in the summer or lounging in Monte Carlo instead of driving his sleigh—well, they weren’t Santa.

They were usually Delbert.

And as punishment for tarnishing the Santa brand, he had to spend one year on Entry Access Quality Control.

“No,” Julka said sourly. He might have been punished by doing Entry Access Quality Control, but she was the one who suffered. She inspected, kicked, shook, and fought with more chimneys than she wanted to consider. Yes, she had the best boots and gloves that magic could conjure, but she still got cold and wet and grumpy.

Delbert only had to emerge when there was a likely chimney, which there hadn’t been all day.

The rules of Entry Access Quality Control were pretty simple: if the chimney didn’t work, and the skylight looked too dicey, then Santa got to use any available door. And Delbert didn’t have to check the doors. With the growing obesity problem worldwide, the entire slew of Santa Advance Teams no longer had to worry about doorways being too narrow for the Jolly Old Elf.

“I’ll boil up some lunch then,” Delbert said. “You gonna want any?”

“No, thanks.” She couldn’t stomach a second day of Peppermint Veal Stew, even if the elves did think it a delicacy. Her stomach didn’t. Neither did her taste buds. That was the other problem of traveling with elves. They preferred sweet foods to almost everything else, turning the most disgusting things into candy.

She’d grown up with it, but that didn’t mean she liked it. After the last few days, she deserved something made here in the Greater World, not that it was greater than the North Pole’s magical universe. The Greater World was just bigger—and lacked the magic.

Which she was really beginning to appreciate.

Because magic—what little of it she had—was making her cold.