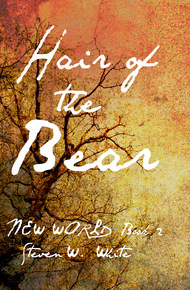 Hair of the Bear is the sequel to New World and the second book in the Tales of the New World series.

News of the murder of Tyrus Jurgen has rocked the ancient lands of Algolus, and his sister, Lisandra Jurgen, has vowed revenge.

Lisandra has avoided the cloistered fate of a typical Algolan duchess by joining the royal guard and catching criminal after criminal. She is fast and strong, cunning and deadly – but if her brother's murderer were to escape justice, she would be dishonored and cast out of the guard. She would suffer a duchess's fate and be married off for a dowry.

The hunt will not be easy. Lisandra has heard that Tyrus was killed by a shadowy Miran who communes with the savage green people of the forests. No witnesses have seen this man, but some whisper the name... Simon Jones.

She arrives on the shores of Mira unprepared for its deadly surprises. To assure her success in her pursuit of her brother's killer, she finds a local guide – a cantankerous mountain man named Tiberius Bogg.

Bogg hasn't laid eyes on Simon, his thirteen-year-old nephew, since they trekked back from the Hestern Sea together last year. It's clear to Bogg that Lisandra is tough as splintercat skin and ornery as an exiled dragon – as dangersome as the old swordsman Tyrus Jurgen ever was. Bogg reckons he'd better lead her off track, into the far and snakey woods, or his pup of a nephew won't stand a chance.

So he takes the job.

As Bogg leads Lisandra on a merry chase across Mira, Simon's ongoing quest to find the wild man, Mira's mystical being, leads him closer to discovering the true nature of the world.

But Lisandra will not be so easily fooled. She leaves Bogg for dead and closes in on Simon, hoping to shackle him for the trip to Algolus for trial and hanging. Once again, Simon must fight for his life alone against a powerful Algolan foe.

And when Lisandra finds that Simon is just a boy, she must choose whether to condemn a child to death... or give up her honor forever.

WANTED
DEAD OR ALIVE
for the willful murder of the
Earl of Albueshire, Sept Algolus
Lord Tyrus Jurgen
SIMON JONES
the scoundrel
Believed to be in possession
of the Mystic Blade
Blodleter
– From a bulletin seen in the hest quarter of Rastaban, in the land of Mira

After nine weeks at sea, with nothing beyond the rail but rolling gray swells, the land of Mira beckoned at last. The hollow clang of the lookout's bell echoed down from the crow's nest.

Lisandra Jurgen, major in the Royal Guard sworn to uphold the law in Albueshire and its provinces and territories in Sept Algolus, tapped her fingers on the rail's worn oak. Finally, justice would be done. Finally!

Lis had no taste for the sea. Ships were not her place. She knew the towns and country of Sept Algolus, and its thieves and ruffians. She knew their hiding places, and which rogue would reveal the whereabouts of another, given sufficient pressure.

And she knew how to apply pressure.

Beyond the rail, Mira was a dark mass, cloaked in morning fog, above the gray sea. The sun would be up in an hour's time, and the darkness would give way to the continent's legendary green forests, visible even from ships well away from shore. Lis would be among those trees soon. Searching.

"What if the stories are true?" The voice, low and rough, came from her side. Galton, the sneak, had crept up beside her.

"They speak of untold dangers, my Lady."

Lis hated that title. She whirled to face him. "You will refer to me–"

"As your duly earned rank in His Majesty's Guard." Galton smiled up at her, and the crown of his head barely came to her chin. He was short and scrawny, wizened, a dried-out old pest who was blessed to be a friend of her father's. He wore a brown robe and a simple belt, hiding soft and lightweight leather armor beneath. Rather different than her own byrnie – a coat of woven iron links.

"What would your father say," pressed Galton, "if he heard me call you Major?"

Lis felt her back teeth pressing tightly together. "What would he say if he heard me call you dwarf?"

"And yet I grow weary of seeing the top of your head."

"I take no offense. You are tall enough to look down on many men."

"That's little consolation for me."

"Then cast your gaze there." Galton narrowed his eyes at the dark continent off the bow. "What a place for his Lordship to meet his end. They say it is a forsaken place. Cursed."

Lis stared at the shape on the horizon, as the top of its outline resolved into individual trees, like black teeth. "Who says? Pirates? Madmen?"

Lis grinned at the old man's drama. "Those days are gone. There are communities there now. Towns on the coast."

Galton made a sour face. "Because they dare not venture inland. What of the beasts? The birds that can pluck up a horse as if it were a beetle? I know not what a four-legged hill is, but I do not like the sound of it. And what of the green men? Vivets, in the local dialect, if I am correct. Not men at all, it is said. Few have seen them and lived."

"I've no interest in the wildlife."

"Pray it takes no interest in you."

"I am only after one thing."

"And what a thing. Have you asked yourself how this creature, this Simon Jones, could have bested your brother?"

Lis didn't know, but she suspected, and that suspicion grew bitter roots in her heart. "Guile. No one could beat Tyrus in a fight."

Galton leaned close, and his eyes were intense under gray brows. "Rumors abound that this Jones character runs with the green men. That he has allies among them."

Lis didn't care to hear of dangers. There were too many – to hear them enumerated grew tedious. "I have no interest in the obstacles. My attention is on the prize."

"That is the source of my fear for you, my... Major. You've had a capacity for single-minded focus since you were small enough to sit on my knee. But you can miss a detail, now and then." Galton looked back to the looming continent, and his voice became even more grim. "This is no place to miss a detail."

Lis didn't like it when Galton brought up her childhood. It softened her will, and took the steel out of her spine. She couldn't stay angry at him.

But he knew the difficulties she faced every day, as a woman – a Lady – in her position. Any other woman of her station would be confined to a palace, kept safe from the danger of so much as a scar, lest her wedding to the son of some neighboring Duke be thwarted and some trade agreement jeopardized. Lis could live the way she did, riding, fighting, and collaring criminals, because of her sheer competence. She was as strong, and twice as fast, as any man on the force. The Royal Guard could not do without her, and no one in the world had the rank – or the strength – to lock her in a tower.

But that meant she couldn't slip. Not once.

She would bring her brother's murderer to justice. The odds against success simply made the task more essential. Simon Jones stood no chance.

She reached past her right ear, until her fingers touched the leather grip on the handle of the weapon on her back. "I have my old mace. You have the stiletto and the amulet. We'll be able to deal with any details, no matter how sharp their claws."

Galton's fingers touched the amulet at his neck, a deeply translucent crystal that looked like quartz, but was not. "Suppose we merely get lost?"

The brightening gloom revealed an inlet, where the water was flat enough to reflect the twilight sky, though the inlet's far shore was too dark to see. Driftwood Bay, as the local maps proclaimed. The quartermaster had sought to avoid Keelkicker Shallows, so the ship should reach Deer Cove soon. It would dock at Fort Inconvenience and from that moment forward, she and Galton would be on their own.

Lis considered Galton's question. "We'll hire a guide. Will that suit you, dwarf?"