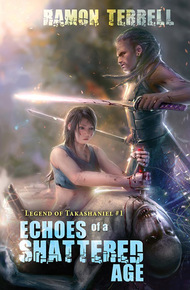 Ramon Terrell was instantly a lover of fantasy the day he opened R. A. Salvatore's The Crystal Shard. Years (and many devoured books) later he decided to put pen to paper for his first novel. After a bout with aching carpals, he decided to try the keyboard instead, and the words began to flow. When not writing, he enjoys reading, video games, and long walks with his wife around Stanley Park in Vancouver BC.

Echoes of a Shattered Age by Ramon Terrell

Technology exists in human history. The gun has fallen. The sword has arisen. The world grows wild and dangerous. An ancient evil bridges the earth plane and the abyss, bringing a massive horde of the most feared monsters in all the five hells—The Children of the Gene: Warriors blessed by the Gods. Kenyatta and his friends stand against the denizens of the abyss while on the path to discovering their unique abilities. Through light and darkness, destruction and chaos, the Children of the Gene battle towering demons to defend their world against everlasting darkness.

Ramon is one of my writing students, who had produced several books of his own, but we adopted him at WordFire. Not only is he a great writer and an ambitious promoter, he has also been seen on numerous TV shows including The Flash, iZombie, Minority Report, and others. – Kevin J. Anderson

"Is the octagon complete?" Zreal rasped. "It must be perfect for this to work, or we are doomed."

"Do what you do best and leave the octagon to me," Brit scolded.

"We have never tried something this big before, my lord! The octagon must be perfect or we will beg to perish for our folly."

"Quiet, idiot." Brit hissed. "I created the octagon with my own power. Do you not think I know how to manipulate it, and what the cost is for failure? Be silent."

"As you wish," Zreal replied. He looked upon his superior with fear and admiration. Brit was powerful, standing at eight feet tall with long, powerful arms that looked as if they could strangle an elephant. His hands were rough and gnarled, an indication of how he drew the earth's energy and twisted it to his will. His fiery orange hair lay in stark contrast with his burgundy skin. His massive legs were as large around as Zreal's entire body. His face was wide and rock-like, as if he could split a boulder with his forehead.

The most intimidating feature about Brit, Zreal thought, was his eyes. A wicked blend of red and blue, those burning orbs looked as if a simple angry stare could cause an agonizing death. Zreal knew not how old Brit was, but if the tales of the Drek's battle with a Daurak were true, that would make him several thousand years old. It seemed inconceivable.

The prehistoric-looking animal was said to be more vicious than any living predator of modern times, and its appearance resembled the two-legged dinosaur predators from this world's ancient years.

Remembering this, Zreal did not bother his master any longer. He didn't dare to doubt Brit's abilities, but dealing with Quentranzi demons was another affair altogether.

Long after Zreal left the circular room, Brit continued perfecting the octagon. Human practitioners of the darker arts would use a circle or five point portal to summon a denizen of the lower planes. Brit used methods that did not originate from this world. The octagon was Brit's own creation, and a more effective tool for summoning the more powerful demons of the abyss. In summoning fiends, one must have a powerful circle to produce an effective hold. If the demon happened to be a particularly powerful one, the circle would have to be perfect, which was a rare ability amongst humans.

Zreal smirked when he thought back to the whispers amongst humans, of a sorcerer who summoned a major demon using an imperfect circle. Once summoned, the demon inspected and destroyed the circle within seconds, slaughtering the sorcerer, and ravaging everything in sight. It took the combined effort of ten sorcerers to bring the fiend under control and banish it back to the lower planes.

Quentranzi demons were altogether different in nature and motivation than any other in the abyss. The most powerful and arrogant of sorcerers shuddered at the thought of trying to summon a Quentranzi. Some rare sorcerers' tomes and books of the Secret Order described these monsters as super-demons, capable of unspeakable turmoil and devastation. They possessed the power to will their summoner to release the hold on them, even if the seal was perfect. According to these ancient tomes, even major demons feared and avoided Quentranzi. To summon such a creature would require an indomitable mind, an unbreakable will, and an internal strength alien to this world and its weakling inhabitants.

Brit was well aware of the many potential dangers of summoning such a terrible creature, but he needed power in the right places, and knowledge beyond his own. He needed otherworldly knowledge that a Quentranzi could provide. "It is finished," Brit said. He stood back from the octagon and inspected it. The octagon was far more effective than the circular seal because of its otherworldly nature. Each corner of the octagon could pierce the summoned fiend if need be, cowing it.

Reassured of the octagon's perfection, Brit summoned Zreal back to the room and began making the customary preparations for a summoning. When Zreal arrived, he was amazed at the level of detail at which everything had been prepared. The octagon was perfect, the light sourcing was just right, and the figure was charged with twisted earth energy to shield against any attempts by a demon to use their innate abilities to extinguish the lights and break the seal.

"You summoned me, my lord?" Zreal asked.

"You would not be here if I had not," came the retort.

"Do you wish my help in summoning the Quentranzi?" Zreal asked, wanting nothing to do with this business.

"I do not necessarily require your help, but I do wish to further justify your presence here by incorporating some of your limited talents into my plans … of course, if you don't mind."

Zreal knew better than to take that last statement as a request rather than the intended sarcasm. "Of course, my lord. Whatever you wish of me. Quentranzi are well known for their ability to project power outside of the barrier even while physically restrained within, as well as their particularly strong and cunning psychic attacks. You wish me to help in fending off these attacks?"

"Quite perceptive Zreal. I would spend my undivided attention on the Quentranzi without troubling over its games." Brit moved to stand in front of the figure while Zreal stood in the shadows to the right. As the summoning began, Zreal steeled his nerves. He had never actually seen a Quentranzi before, but if the power and horror that the lesser major demons were capable of was any indication, the octagon had better be perfect.

Brit softly chanted in a language Zreal did not understand, and a dull green light began to pulsate in the lines of the octagon. Brit repeatedly chanted the name "Kabriza" with increased intensity.

In the lower planes of the abyss, a large gray demon was devouring a smaller fiend. It raised its massive, horned head at a distant call. The call was coming from one of the higher planes, but the thing had never heard of such power coming from there. The rage caused from hearing its name gave way to curiosity, and thus Kabriza heeded the call.

The lines of the octagon began to glow wildly, pulsating between green and blue. To Zreal's surprise, the octagon expanded to accommodate the large abysmal denizen. Foot-high flames appeared at each corner of the octagon seal that also flickered in hues of green and blue. The center of the seal was distorted with haze, and the wall nearest the seal began to blur. A sickening sense of wrongness crept into the room that was so strong, Zreal thought he might choke. It was as though the air he breathed was becoming tainted.

After a few moments that seemed like hours to Zreal, the seal darkened until it was pitch black, and through that blackness stepped Kabriza. If it were not for the strict instructions by Brit to remain hidden, and the fear of disappointing the Drek, Zreal would have cried out at the sight of the monstrosity. His eyes widened in amazement at the sight of the thing.

It stood fourteen feet tall, and its arms were so long that its clawed hands hung merely two feet from the floor. Its huge gaping maw was littered with sharp zigzagging teeth that resembled a pile of broken daggers. Two horns protruded from the bottom of its forehead, pointing straight out and curling upward like long hooks. The spikes protruding from its back looked as if they could cut through the strongest armor, and its legs were as thick as the branch of a great oak. It narrowed its glowing red eyes at Brit. For a time it stood there, arms hanging in front of its torso, tapping the sixth toe on its left foot. Brit faced the fiend, unmoved and calm.