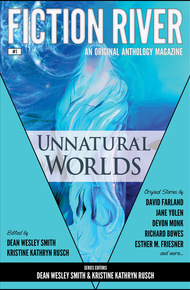 From a funeral procession in Asia to an ancestral estate deep in the heart of a vaguely Victorian forest to a carriage accident in the vast universe of The Runelords, Unnatural Worlds takes readers on a journey to the far side of the imagination. Funny, heartbreaking, frightening, but most importantly, memorable, the original stories in this anthology go places few writers dare reach.

Writers lie for a living. Lawrence Block acknowledged that when he called one of his how-to-write books Telling Lies For Fun and Profit. Only when I lied, I wasn't lying to you folks.

I was lying to me.

Here's the lie. For fifteen years now, I have said I would never edit again. I said this for two very good reasons: 1) I never ever ever ever wanted to work for anyone else again, especially as an editor; and 2) I wasn't going to start another publishing company. I was done with all that owning-a-business nonsense.

I could not foresee the rise of electronic books, print-on-demand publishing, and crowdfunding. I had no idea that the publishing world would change so drastically that I could jump back into editing as my own boss without a huge capital outlay.

I am still surprised by this. Stunned, actually.

I did know one thing: I was never going to read slush again, and I will keep that promise to myself. I spent ten years in the slush-reading trenches. My time there is done.

What most people don't remember is that the first magazine/anthology series we ever did, Pulphouse: The Hardback Magazine, had a subtitle. It was A Dangerous Magazine. We published fiction that slipped through the cracks, fiction that many other publishers wouldn't touch.

In 1991, I left the magazine side of Pulphouse to edit The Magazine of Fantasy & Science Fiction. F&SF had (and has) a different mission: it needed to reach a broader base of subscribers. Sometimes I could slip in a dangerous story, but mostly I published stories by spectacular writers who wrote down the center of the sf/f field.

I hadn't realized how much I missed dangerous until we started editing Fiction River. This volume covers a broad range of the fantasy genre. Future volumes include hard science fiction, time travel, urban fantasy, mystery, and romance. We're not sticking to one genre nor are we sticking to one voice.

With that in mind, Dean and I decided to co-edit Unnatural Worlds. We wanted a diverse volume and what better way to do that than to have two editors. We agree on most things, but we disagree sometimes on what makes a story work.

Some of my favorites in the volume aren't Dean's favorites, and some of his aren't mine. Yet the volume all works together as a cohesive whole.

We also edited each other. I argued with him for weeks about my story, "Shadow Side." I kept asking if he wanted something else. He threatened to go into my computer files and drag out "Shadow Side" himself.

I asked him for a Poker Boy story. Dean couldn't understand my interest. Poker Boy is one of my favorite all-time characters. If I could publish a Poker Boy story in every anthology I edit, I would. I know Dean would dig in his heels at that. So I am pleased that I managed to get one Poker Boy story out of him for the first volume of Fiction River.

The other stories in the volume run a range of emotions and subgenres.

We start with Devon Monk's "Life Between Dreams." Devon, best known for her Allie Beckstrom urban fantasy series, knows how to straddle worlds. Since we're straddling worlds with Unnatural Worlds, we figured Devon's marvelous short story was the perfect place to start.

Devon's story blurs the boundaries between fiction and reality. Ray Vukcevich explodes those boundaries. He always has. The great thing about Ray's writing is that he creates a world that no one else could ever invent. Dean calls Ray's world "Planet Ray" and I can't think of a better description. Ray is, in my opinion, one of the best and most underrated writers in the United States. "Finally Family" should show you why Dean and I both love his work so much.

I have yet to read an Esther M. Friesner story that I didn't like. She has written everything from heartbreaking science fiction to historical young adult fiction, and she makes it all look easy. When we asked Esther for a story, we had no idea what we'd get. She provides us with yet another new world, one that is uniquely Esther (but does continue, for a short time anyway, our bug-oriented theme).

"True Calling" marks Irette Y. Patterson's first fantasy publication, but I can guarantee it won't be her last. Set in our world only with magic (and cake!), Irette reminds us that the romance genre has taken on the word "paranormal" for a reason—and that reason isn't just vampires. It's also the gentle, heartwarming side of the genre that most of the traditional magazines dismiss, and which readers love so well.

Kellen Knolan's "A Taste of Joie de Vivre" is also a first short story sale, although Kellen has published two novels under a different name. Like Ray, Kellen is an original, and his perspective is truly his own. Someday we hope to say that Fiction River provided the first glimmer of Planet Kellen.

Annie Reed has been one of my favorite writers since I first encountered her work at one of our workshops. She has sold a lot of short fiction to anthologies and magazines, but I have a special place in my heart for her Diz and Dee detective stories. When she submitted "Here, Kitty Kitty," I didn't tell Dean how much I love the Diz and Dee stories. I knew he hadn't read one before, so I let him be the final arbiter. He loved this as much as I do. Diz and Dee give us a much-needed dose of urban fantasy and also one really hot elf.

Leah Cutter's story has no investigator, just one marvelously courageous young girl, who takes an important personal stand. I first read this story in June, and like all great fiction, it has become a cherished memory. After you read "Sisters," you'll never look at ceremonies the same again.

When we asked Richard Bowes for a story, I expected something like the New York tales he used to write for me at F&SF. Instead, he sent what seems like a traditional fantasy tale, with a witch and enchanted characters. But in typical Rick Bowes' fashion, he takes an expected world and makes it unexpected, keeping all of that emotion that makes Rick Bowes's fiction so very powerful.

Jane Yolen's "Dog Boy Remembers" took my breath away when I read it. The story seems so simple and yet it's not simple at all. Jane has long carved out a unique place in the fantasy genre, and no fantasy volume would be complete without her work. You'll remember Dog Boy long after you close this book.

David Farland wrote a Runelords story just for us. Runelords is parallel worlds fiction masquerading as epic fantasy. Epic fantasy is hard to write in the short form, but Dave, whose original incarnation was award-winning short fiction writer Dave Wolverton, is more than up to the task. "Barbarians" is a powerful tale that will inspire some of you to read the Runelords saga and remind the rest of you why you read it in the first place.

The breadth of the stories here astonish me. What astonishes me even more is that all of these authors were willing to work with us on our return to editing, despite other deadlines and commitments. We're lucky to have such a fantastic group of writers and the fruits of their incredible imaginations.

The worlds here might be unnatural, but they're also quite impressive. And I think Devon's title says it best. I feel as if this volume shows us the life between dreams.