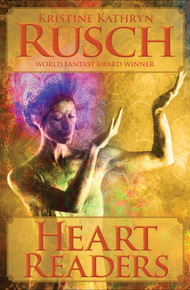 Twin princes—the curse of King Pardu's line. Pardu killed his own twin to secure the throne. Now Pardu, dying, wants to use old magic to determine which of his sons will rule—without murder.

The old magic calls for heart readers to determine which twin has the pure heart. But the heart readers must work in teams—female teams. And the team chosen by the palace has a history, a violent history, a history that makes these two women unsuitable to choose the next heir.

A long time ago, when we were struggling newbie writers, Kris Rusch and I would exchange first draft manuscript and critique each other's work. I read HEART READERS back when it was just an unpublished ms, and it made a great impact on me. I am thrilled to include it in this bundle. – Kevin J. Anderson

PARDU STOPPED AT the open door and wiped the sweat from his face. The desert's heat shimmered in here, making the room feel tight and close. Pardu stopped as the smell hit him. Rank and fetid, the smell almost overpowered him before he recognized it. Blood and fear and something raw, something his long-dead brother once called invigorating. The smell of the battlefield. The smell of death.

The low murmur of women's voices drifted from the room. A girl cried out, and someone shushed her. Pardu smiled. No one should scream at the birth of a king. He pushed the silken curtain back and stepped inside.

Four women surrounded the naked girl. Her distended breasts rested against her overlarge belly. She leaned against the birthing couch, her legs spread, a large, blood-drenched pillow beneath them to catch the little king. Her eyes were wide, her hair matted to her face. For a brief, breathless moment, she looked as she had in passion: cheeks flushed, eyes glazed and too bright, lips soft and rounded. Then she began to pant, and the pain spasmed through her body and into her face. She didn't know he was there, but the midwives did. They nodded once and returned to their task.

The smell had faded, although the heat was more intense. He walked across the parquet floor and crouched next to the midwife by the girl's feet. The edge of the child's skull pushed against her pubic hair.

"Pardu." The girl's surprised whisper echoed against the curtains. She thought he had forgotten her—and he had, for the most part, since the child had begun to ruin her slender figure. He had other lovers, better lovers, although none had ever borne him a child. And he thought of this child daily, planning great things for the life of his son.

"Push, Lanie," one of the midwives said.

The girl half groaned, half sighed, and the child's head appeared, covered with a milky fluid and bits of blood.

"Again," said the midwife next to Pardu.

"I can't," the girl whispered.

Pardu pushed the midwife aside, and cradled his son's soft, sticky head in his hand. "You will," he said and glanced up. The girl's eyes were frightened. "Push."

She gritted her teeth, and her face grew red with straining. He cupped his son's head and watched as the shoulders appeared, then the entire child, trailing a cord, fell into his hands with a bloody, sucking sound. Pardu glanced for a penis, saw it small and shiny with fluid, then held the child up in triumph.

The midwife snatched the child from him and dabbed the baby's eyes and wiped the slime from its nose. The baby choked, then coughed and wheezed. No cries from this little one. He would be strong, like his father.

Pardu was about to stand when the girl moaned. The moan rose into a scream as one of the midwives pushed on her belly. Another head pushed its way out of her opening, followed quickly by shoulders. Pardu had to move quickly to grab the child before it fell to the pillow below.

Another son, still attached to its mother by the long, kinked cord. Pardu stared at the child, remembering the series of fortune-tellers, the long, pitched battles, the nights he had lain awake agonizing. All he had to do was take the cord, wrap it around the child's neck and squeeze. He had killed enough men in his time. What was one son's life to protect another son's legacy?

The midwife took the child from Pardu, cleaned its eyes and nose and, when it didn't breathe, slapped it. The child wailed, revealing good, healthy lungs.

Pardu closed his eyes. For the first time since he had entered the birth room, he felt ill. Two sons. Twins. The elder would have to rule.

He opened his eyes. The twins rested on pillows, squirming as the midwives swabbed the blood off their skin. Pardu couldn't tell which was which, and soon the midwives wouldn't be able to either. The elder would have no claim, no legitimate claim, because no one would know for sure which child appeared first.

Pardu walked to the door, pushed the curtain back, and motioned for one of his men. "Send the heart readers," he said.

The man nodded and walked across the sunbaked sand to the main palace. Pardu returned to the stifling room. The girl cradled his sons, one against each breast. The smaller baby nuzzled, while the larger suckled heartily. The midwives had clipped the cords and were taking them and the afterbirth outside to dry for the womb casters. One of the midwives remained, wiping up the blood.

The girl smiled at him. A strand of hair curled against her flushed cheek. "We have sons."

He did not smile back. "One of them will have to die."

The other child began to suckle. The girl glanced at both of them and a tear ran out of the corner of her eye. She shook her head, slowly.

"Heart readers," a male voice said. The curtain swished open and two elderly women hurried into the room. They bowed before Pardu and he noted that their white hair was thinning against their skulls. Dust covered their robes.

The women stood. One opened the side of her robe and pulled a slate from a sewn-in pouch. The other said, "Who do we read?"

"You read my sons." He pointed to the babies. The girl clutched them tighter and turned away slightly, as if she could protect them with her body.

The heart reader without the slate smiled. "Beg pardon, sire, but we cannot read newborns."

Pardu clenched his fists together. "I need them read to determine succession."

"Newborns have had no chance to love or to hate," the heart reader said. "They have not cried except in physical pain."

"Newborns have no heart to read." The other heart reader slipped her slate back into her pouch. "To determine succession now, you must see a womb caster or a fortuneteller."

"But they won't tell me who has a pure heart," Pardu said.

"And neither can we," said the first heart reader. "For that we must wait until they have had a chance to live and to love. We're sorry, Highness."

They bowed again and scurried from the room. The girl smiled at him, but her eyes glittered with rage. "Perhaps you should let the babies grow," she said. "I'm sure they'll both have hearts purer than yours."

"I'm sure," Pardu said. He looked at his sons. One had a ridge around his skull, an indentation caused by the birth. The other clutched his mother's breast with one tiny hand. Perhaps if he raised them equally, one would show an affinity for leadership, while the other did not. Perhaps he wouldn't need spellcasters, sorcerers, or heart readers.

He clapped his hands and the remaining midwife started. "Take the children and find a wet nurse," he said. "I want them raised in the palace."

"I can nurse my own sons," the girl said.

"They are my sons," Pardu said. "They shall be raised my way."

He waved his hand and silenced her. "Pay Lanie well," he said to the midwife. "Make sure she can live in comfort if she chooses. Kill her if she tries to so much as see my sons. Is that clear?"

Pardu turned, his boots slapping against the parquet floor. The babies did have purer hearts than he did. Twenty years ago, he never would have thought of killing newborns, or of removing them from their mother.

He slid the curtain back and stepped out into the heat. The sun reflected off the sand and he had to squint against the brightness. He took a deep breath. The air smelled fresh. Perhaps the stench had goaded him into thoughts of killing—the birthing room as a battlefield. The opening gambit in a war that would continue throughout his lifetime if he let it: brother against brother, son against son.