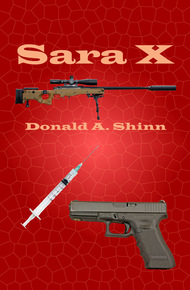 Donald A. Shinn is a writer, gardener, jack of all trades. He started writing seriously in 1980. His first published novel "The Campaign" was a semifinalist in the 2012 Amazon Breakthrough Novel Awards.

Sara X by Donald A. Shinn

Shannon Brewer seems like a typical wife and mother. What's atypical is her past, and it's about to catch up to her.

Hector Esteban, now in line to become President fears the truth coming out about the death of his first wife.

Hector's father-in-law, Roger Bentley, founder of Bentley Security vows to help Hector. There's just one problem. They miss on their first shot at killing Shannon Brewer and she's not about to give them a second chance. Shannon Brewer disappears and in her place comes back Sara X, a threat unlike anything Bentley Security has ever faced before.

Donald Shinn is a guy I know from the Amazon Breakthrough Novel Awards, as he and I both entered that contest while it was still running. His novel Sara X hits the ground running and doesn't stop. While hell hath no fury like a woman scorned, when you tick off a female assassin, look out. Throw in a politician with one giant skeleton in his closet who will do anything to prevent it from being exhumed, and you've got a terrific action packed thriller from a writer who needs to be discovered. – Nick Harlow

Those three words were all California's Senate candidate Hector Esteban needed to hear as he walked into his bedroom to know that he was going to die. It wasn't so much the words, as the person saying them. Seeing Sara sitting in the chair alongside his bed with the handgun pointed at his chest merely confirmed that belief.

The four men he'd sent to kill her had failed. The perimeter walls surrounding the house, the alarm system, the armed guards at the gate, the guards patrolling the grounds, and the two security men on patrol in the car around the house had all failed to stop her, and now he was going to die.

"I'll bet you're surprised to see me here," said Sara coldly as she kept her handgun pointed at his chest. "No doubt you thought Victor and his brothers would be having some fun with me about now. Would you like to tell me why you sent those four thugs to kill me, or should I just deal with this now?"

Hector stood frozen at the foot of the bed. His mind frantically raced through every available option and they all seemed inadequate. There was no place to run to, there was no place to hide, and there was no one to help him. This bedroom had always been a sanctuary to him, but now it was a trap. He could call out for his security people, but he'd be dead before they could intervene. He was trapped and he was going to die here.

He'd spent the last six hours downstairs in his office waiting to hear back from the Mazza brothers that the job had been done. His attempts to reach them had been fruitless. By three in the morning he'd finally concluded they must have finished the job and he decided to go to bed. Now he knew that they'd failed. Not only had they failed, but they'd given him up in the process.