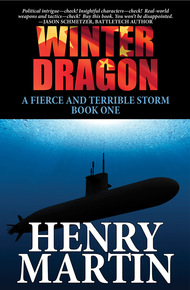 Henry Martin is a former naval officer who served on both submarines and surface ships and a writer whose work has appeared in markets as diverse as Interzone, Polyphony, On Spec, and several original DAW anthologies under the name Steven Mohan, Jr. His work has won honorable mention in The Year's Best Science Fiction and The Year's Best Fantasy and Horror and he is a past Pushcart Prize nominee. He lives in Colorado.

The submarine USS Pasadena draws a routine duty: bird-dogging a Chinese naval exercise. But what happens next is anything but routine. Mark Castillo, captain of the Pasadena, watches as a Chinese submarine sinks a Chinese destroyer. Neither China nor the United States understand what's really happened. The Americans believe they've witnessed another Tiananmen Square. The Chinese think they've been attacked by the lurking American submarine.

And the two most powerful nations on Earth stumble towards war.

It will be up to Castillo to unravel the mystery—before all Asia is consumed in the fire of a Winter Dragon.

I've loved movies about submarines since I first saw Run Silent, Run Deep with Clark Gable & Burt Lancaster. Just as I ran out to see Crimson Tide and U-571, I eagerly dove into Winter Dragon, a tale about a submarine that becomes a focal point in a possible war between the United States and China. Since the author actually served on a submarine, you can feel the credibility in his words and will enjoy a unique look at life aboard an underwater warship with the power to start World War Three. – Nick Harlow

Lieutenant Mike Thompkins had his dipping sonar down, listening to the ocean, not that he really expected a Chinese submarine to penetrate the inner ASW ring. Still it was a good excuse to get off the Hawes and get some sky time. Flying the SH‑60 was a real kick.

Thompkins glanced back at Petty Officer Carsten, the man listening to the ocean. "What do you hear, Carsty? Any humpbacks doing what humpbacks do?"

Carsten's head jerked up. "High speed screws in the water."

Thompkins chuckled. "Hey that's good, for a second there—"

"Torpedoes, sir," Carsten shouted, "I have torpedoes in the water."

Thompkins jerked around in time to see a fish streaking through the water.

Straight toward the carrier.

Thompkins lunged for the radio transmitter. "ASW Commander, this is Osprey One. I have one, no, two fish inbound your posit. Repeat, torpedoes astern of Truman heading in. Over."

Suddenly flying the SH‑60 wasn't quite so much fun.

Thompkins twisted in his seat to look back at Carsten. "Start pinging that fucker," he roared. "I wanna know right where he is."

His throat tightened painfully. The carrier was going to die and it was his fault.

Because he'd let a submarine through.

The carrier's OOD glanced at the box from which the voice had come. "What the hell is he talking about?" he growled. He glanced back at the messenger of the watch. "Aft lookout see anything?"

The seaman repeated the question into his sound-powered phone and then shook his head.

Truman was pointed into the wind, conducting flight ops. If he turned, he'd lose wind speed across the deck and have to cease launching aircraft. And he had two Vikings waiting in cats one and four.

So he did nothing.

To Thompkins's growing horror the carrier did not maneuver, did not turn, did not do anything. What was the matter with her? Why didn't she do something, anything?

The lead torpedo was tracking right in.

Thompkins wheeled on Carsten. "Do we have anything on that sub yet?"

Carsten shook his head helplessly. "She's not moving, sir. She must be below the layer. And the carrier's noise is masking—" He suddenly stopped, looked down and pressed a phone to his ear. "Wait one." His head jerked up. "Another torpedo, sir."

Unlike the flattop, the little frigate was designed for ASW work. The sonar operator in combat heard the sound of high speed screws. "CICWO," he sang out, "look at this."

The Combat watch officer glanced over the operator's shoulder. It took him only five seconds to recognize the situation. He reached for the 2MC.

"Bridge, Combat." The OOD had his binoculars to his face, watching the carrier's stern. The panic in the CICWO's voice made him drop his binos and turn to look at the 2MC box. "High speed screws at two-one-four relative, I have no change in bearing, say again, torpedo is CBDR."

The OOD had only pinned on jay gee a month ago, but he didn't hesitate for even a second. "Hard right rudder. Come up to flank speed. Launch noisemakers."

He turned and pointed at the Boatswain Mate of the Watch. "Captain to the bridge. Sound GQ."

As the ship turned ninety degrees from her previous course, he glanced at the helmsman and said, "Meet her."

Then he stepped over to the 2MC. "Combat, Bridge. Advise the ASW Commander we have a torpedo in the water."

The messenger of the watch looked up. "The aft lookout reports that the plane guard is turning."

The OOD's brow furrowed. "What?"

He stepped out onto the starboard bridge wing. Sure enough, Hawes was in a high-speed turn, kicking up a long tail of white spray.

The OOD opened his mouth to give an order.

But it was too late.

Thompkins watched the first torpedo track straight down the carrier's, wide, white wake. The weapon struck the flattop dead astern. There was a half-second when nothing happened, and Thompkins allowed himself to hope that the torpedo was a dud, and then the ocean behind the giant ship's stern expanded in a bubble of destruction and light and water. A deep bass shock rippled through the air.

And then the second torpedo struck, following the first one in like it was on rails.

The first torpedo struck the great ship at the rudder, causing a sudden wrenching, deceleration. The torpedo's accelerometers sensed the sudden velocity drop and triggered the warhead. The explosion instantly vaporized the rudder and sent great clouds of hydraulic oil billowing out into the sea.

The massive shock wave snapped the blades off the inboard screws and mangled their immense shafts. In the process, the titanic forces at work tore away the shaft seals.

Ten seconds later, the second torpedo followed the first one straight in, passed right through the cloud of oil and debris that had once been Truman's rudder and struck the hull.

The second torpedo malfunctioned. There was a break in a copper wire that linked the computer to its arming trigger and the torpedo never detonated. But it was traveling at nearly fifty knots when it hit, fast enough to do plenty of damage, and Truman's hull had already been weakened by the first explosion.

The torpedo punched right through Truman's steel plating and kept on going, killing four watchstanders in two spaces and not stopping until it hit the Number Three Reduction Gear. And then something truly terrible happened.

Heated and jarred by the impact, the torpedo's warhead started to burn.

Truman was beset by both fire and water.

Ironically, it was worse for the carrier than if the torpedo had exploded. The burning explosive was hot enough to ignite the torpedo's titanium body, which began to burn vigorously at 2200°, consuming oxygen and sending great clouds of greasy, gray smoke pouring out into the space.

Deep in the most vulnerable part of Truman a Class Delta fire was burning.

The Aft Roving Watch (Under Instruction), Fireman Eddie Mitchell, was standing near the space's watertight hatch (he'd just finished setting Zebra) when the torpedo came through, killing the Aft Roving Watch and the warrant he'd been talking to a second before.

All Mitchell had to do to save himself was open that hatch and run for his life.

Mitchell was all of nineteen years old, a wiry, young black kid from inner-Philadelphia on his first WESTPAC, a boy not even qualified to stand watch by himself.

But Mitchell could see the space was starting to flood, so he did not open that hatch, did not violate Truman's watertight integrity.

Instead, he staggered deeper into the space, coughing and gagging on the smoke, his eyes burning, barely able to see. As the fire spread it ignited everything flammable in its path, melting plastic, burning pipe insulation, even flashing off the reduction gears' store of lube oil.

And it heated a JP‑5 transfer line used to move jet fuel from a bulk tank to an aft fueling station. Mitchell had made it halfway across the space when he heard a pop and the line burst, showering the hot deck plates with superheated jet fuel.

And suddenly the space was filled with dancing yellow flames and the angry roar of a massive fire.

Mitchell covered his face with his arm and just ran. Somehow he managed to reach the Halon activation lever.

Halon's purpose was to displace the oxygen in the engineering space.

Leaving him with nothing to breathe.

And he knew he didn't have the strength to make it back to the hatch.

Fireman Mitchell watched the fire burn for a few seconds and then, knowing it would mean his life, he turned and pulled the lever.

Robbed of one leg of the fire triangle, the conflagration should have gone out immediately. Halon had proven a hundred percent effective the twelve times it had been used against main space fires before.

But this was a Class Delta.

It burned so hot that when it came into contact with the seawater from the progressive flooding that was now spreading through Truman's guts, it stripped apart the water molecules, creating fresh oxygen to feed its hunger.

Fireman Mitchell's last vision before he died was a glimpse of hell: an incandescent blue-white flame so hot that it burned even the ocean.