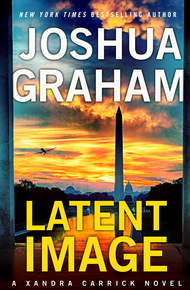 At the height of President Jennifer Bradley's inaugural parade, a bomb detonates, followed by shots from a sniper's rifle. She survives despite the numerous casualties including the Chief White House photographer. The authorities apprehend the only surviving suspect, but before they can interrogate him, he dies mysteriously while recovering in the hospital.

In an effort to hunt down those responsible and prevent future assassination attempts, Special Agent Wade Masterson of the Secret Service recruits photojournalist Xandra Carrick for a dual-role position as the President's Photographer and Clandestine Assistant Operative.

Xandra's uncanny gift of second-sight through the lens of a camera thrusts her straight into the maw of a deadly terrorist plot that runs far deeper than anyone in the intelligence community ever imagined.

But she may already be too late.

In a tale of vengeance, honor and sacrifice, Xandra must draw upon all she has to stop an insidious plot which threatens to bring the country to its knees with a biological weapon that will decimate the nation's population.

I first discovered Joshua Graham's work when we both ended up in an anthology of Star Trek short stories. Since then he's become a best-selling New York Times author as his thrillers have developed a wide audience. I enjoyed this book because it's through the eyes of a character rarely explored… the White House photographer. And since the camera never blinks, our heroine finds the photos she shoots can lead to someone shooting back. – Nick Harlow

IN THE CROSSHAIRS OF THE SNIPER'S SCOPE the target shifted in and out of view. The motorcade drifted down Pennsylvania Avenue, Secret Service agents flanking its side, while Vice President Phillip Marsden and his wife Gwen waved to the cheering crowd on either side of the street behind the cold 16-gauge steel tubing of the barricades.

Neither of them was the target.

The sniper swung his scope back to the west, where the glare of the sun blinded him momentarily. He grunted, blinked and reestablished his view. The cold January wind bit at his bare fingers as he felt the trigger and anticipated the diversionary strike his partner would unleash half a block away.

Tuning out the trumpet strains of marching bands, the steady drum beats, and the crowd's applause, he initiated a silent countdown just as Jennifer Bradley, the nation's newly re-elected president strode past the designated spot.