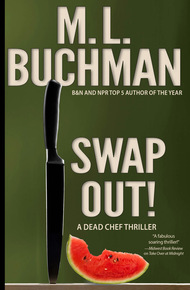 Swap Out! by M.L. Buchman

Why??
Someone watched the pot?
Cried over spilt milk?
Cooked the goose but not the gander??

Only Jeff the Chef knows, and he's next!

His recipe for survival:
Step 1. Finding the woman who refused him years ago
Step 2. Boarding the nastiest helicopter that was "never built"
Step 3. Descending into a renovated missile silo that "doesn't exist"
Step 4…

To survive is gonna take one hell of a Swap Out!

When I first put out a call to authors asking for political thrillers, I figured Matt Buchman had sent me the wrong book, since Swap Out! is about restaurant chefs. Turns out this really is a novel about politics, and the chef in question is cooking up more than haute cuisine. A rather offbeat plot but if you want something truly out of the ordinary, this is a really clever book. It's billed as a "Dead Chef Mystery" and will leave you hungry for more of Matt's books. – Nick Harlow

Four-and-a-half minutes before the premature finish of her last show ever, Maggie brushed her hair back and tucked it behind her left ear to give the television audience a clear view of her profile.

She leaned in to check the frying chicken and pretended the camera wasn't there.

She'd insisted that it be placed a little higher than other cooking shows. Not the best for showing the food, but definitely right to showcase her cleavage to advantage. And the frilly edge of her Navajo-blue satin blouse made it appear that even more showed than truly did.

Mama always said that sex sold. And she proved it with her elite clientele and her upper East Side condo. Hence Maggie's chosen screen name, Hadderly. Almost couldn't resist the next step, Had Her Lately.

Of course, Maggie preferred not to sell sex by the half hour like her mama. Well, there was a laugh, dearie, we both work in the thirty-minute format. Mama often cooked their midnight meals after her last trick left, Maggie's first Naked Chef. Definitely not her last.

The skinless chicken breast in a simple egg-white and spiced-flour batter was sizzling up to low-fat perfection. Her mouth rattled away with practiced nonchalance about fats, calories, anti-oxidants, and high-flavors-not-being-sacrificed-thank-you-very-much. Make it sound easy and it sold that way, first cookbook headed into third printing. Hardcover. Eat them noodles!

Her brain always ran a different script than the show's.

"See ladies. You can cook these dishes, and still have the figure that knocks them dead in their tracks, every man's bedroom fantasy. Well, maybe not you middle-age, middle-weight housewives. Not without my inherited metabolism. I could live on pizza and pie and look like this. Mama and me, we could be twins. Men walk into sign posts when we stroll Fifth Ave arm-in-arm. Forty-one and she still snags the rich fifty-year old jerks looking for teenage fantasies in their beds. She makes them pay, big time, and she doesn't disappoint. At twenty-four I've got it twice over."

Maggie inspected the audience while she chatted about kale, arugula, and walnut salad, "good calcium and Omega 3s there," and gave the side camera a long view of her flat stomach and perky, sheerly-harnessed breasts.

Ten years and she'd be made with enough cash to live out her days in luxury. Then she'd worry about finding a nice beach house and a man who could make her toes curl just by walking into the room. But no man would ever declare she was successful because of him. For now, she'd take men as she found them, delectable and disposable.

Any likely ones in the audience today? She inspected the four rows of studio theater seating while explaining her mother's mustard vinaigrette.

There was always Joey. Her production assistant sat in the second row for each filming as a last resort, always introduced as her "good friend." Achingly handsome. He wasn't the sharpest whip, but they looked damn good together for the final taste shots. Boring in bed. Really, really sad. A waste of manflesh and it would be a long time until she sank that low again.

All this month she'd found handsome enough husbands of other women for the last shot, but that's as far as it went. Mama's siren song beckoned to other wives' men, VIP and very cash-heavy ones to keep her in her high-rent lifestyle. Her daughter only took 'em free and single. But it had been far too long since she'd found one in the audience handsome enough to assuage her own appetites. And the dregs you found trolling in bars weren't worth the effort of carving your way through their egos.

Then she spotted him.

Back row, off to the side. Not a big man. No broad shoulders or square chin, but the look of self-assurance and absolute focus that always made her knees weak. He sat a little too obviously by himself, all out of age with the scrawny little grandma beside him. He focused on her with an intensity that was both arousing and a bit scary, her favorite mix.

Awfully far back to invite down for a taste… But, if she climbed the steps to fetch him herself, the camera following her stair-mastered behind from behind… Sex sells, Mama. Should've worn a lower-backed blouse. Should've worn one open down to her ass. But it was mid-show, too late to help that. She'd shake her hair loose as she walked, that provided the same effect. Guys couldn't resist her straight fall of Scandinavian blond hair any more than they could Mama's.

She turned up the heat a little under the chicken, had to accelerate the cooking to create the extra camera time to make the walk. Her timing was always impeccable, on and off camera. They were already talking hour format and even hinting at a live-broadcast cooking show, the top of the pyramid. On my way up, Mama.

This was the last episode to film today and damn if she didn't deserve a treat.

She'd start with him in the dressing room.

Hopefully, he'd have the stamina for another round in the taxi, then back to her place…

Or maybe they'd start right here on the polished wooden floor after the crew was gone, a little Mazola Roller. Been a while since she'd done that, two naked bodies and a couple pints of oil.

"Use canola ladies," she indicated the frying pan and thought about kneading his tight, slippery buttocks, "avoid those saturated fats." Her smile for the camera was perhaps a little greedy, but they'd think it was for the food. She knew better. A quick glance revealed that he was up on the edge of his seat. He understood her smile. Excellent!

Maggie moved to the oven to check on the garlic-olive oil bread while keeping up her inane cholesterol-chatter about "Virgin versus extra virgin," continued for the camera. "Not even close, ladies, not since thirteen." Boy from the apartment next door, did it in the elevator. Scared the daylights out of him and snagged ten bucks from the security guy for giving him a peep show on his monitor. Her first paid appearance on TV.

The initial blast of heat from the oven brushed her hair back, a little sweaty could be very sexy. She pulled the door all the way down so that the hot air spilled over her skin above the plunging neckline. Bedroom sweaty. She and Mr. Back Row Hunk were just gonna sizzle together.

A small flash blinked deep in the oven. No bigger than the spark off her bedroom doorknob zapping her finger after shuffling barefoot across the plush carpet in Mama's high-rise condo.

The tiny flash blossomed forth, a slow-motion, unfolding flower of deep orange. The convection fan in the back spun rapidly.

But she hadn't set it to convect. She checked. The switch was off. The bread better not be burnt, that could be awkward, though she had a spare loaf stashed ready for a discreet swap out in the second oven.

The blossom of orange flickered red and yellow as the fan roared up to a high whine. The smell of gasoline wafted across her nostrils, gasoline?

A firestorm blew out of the oven like a dragon's breath. In an instant, a tornado of heat and fire wrapped around her.

After the shock came the pain.

She spun away exposing her waist-long ponytail to the blast. It burst into flame. Like a rotisserie beef, she twisted one way and another as the jet-fuel, benzene, and styrene mix roasted her alive in front of the studio audience. The napalm gel burned away her sheer clothes then clung to every part of her skin and turned her into a twelve-hundred degree human torch.

The high-angle cam caught her in naked glory the moment before her skin began to crisp, a perfect Godiva clothed only in flame. Without question, the film, no matter how well suppressed, would hit the Internet within the hour. It would go viral within a day. She'd finally found international fame.

The last thing Maggie Had Her Lately ever noticed was the empty seat in the back row of the audience.