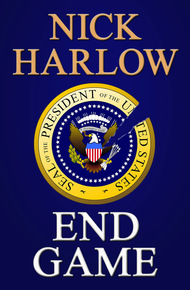 It's the reality show with the ultimate prize.

A reality show contestant running for President? Since we have politicians showing up on Dancing with the Stars, why not reverse the process? Sounds far-fetched, but when you have a biased network that will pull out all the stops and a nation obsessed with celebrity, (see: Trump, Donald) anything's possible. Add a dash of Watergate style dirty tricks, a contestant with a very powerful agenda of her own, and you've got a candidate that Joe and Mabel Sixpack in Upper Buttcrack, Arkansas can't wait to elect. Vote early, vote often, and pass the beer nuts.

Network President Logan Vicks creates The Negotiator under the guise of reality television... but her secret intent is to groom the perfect celebrity candidate she can control once in the White House. What she doesn't know is that her It Girl contestant Cassandra Jack has connections to a shadow government... along with a plan of her own to win the Presidency and vote Ms. Vicks off the island.

Endgame is the story of bias and politics going over the top in an effort to capitalize on America's obsession with reality television and celebrity.

About four years ago I wrote this book about a reality show celebrity running for President. I was simply in the mood for something way over the top. Of course every agent & editor who looked at it probably gave it an eye roll and one told me it was an unbelievable plot. But hey, I said, it's fiction.

Back in the fourth grade, I had a teacher who told me, "This is America. You can be anything. You can become the President of the United States if you work really hard."

You probably had a teacher who said something similar.

Then you grew up and realized it was a giant, steaming pile of horseshit. All because life isn't fair, and, in America, hard work can be trumped by celebrity, appearance, connections, or any number of lame intangibles.

The teacher had the right idea in my case, but she was off by one word.

I'm not going to be the President of the United States.

I'm going to create the President of the United States.

Long story short, I've got everything it takes to be a successful politician in this country. I've got no soul, no conscience, and have been steamrolling anyone who got in my way since high school. I have no qualms about lying, bribes, kickbacks or backroom deals, and I can make Machiavelli look like an amateur in the manipulation department.

I've been that way since I was a little girl.

You see, I didn't get to be the president of a television network playing by the rules. A few play dates with my supervisors here, a few broken promises there, some well placed Ginsu knives in selected backs, and bada bing, I'm top of the heap at the age of thirty-eight.

So what if I enjoy the sight of a lopped off network anchor's head rolling down the steps of a Mayan temple? It's good practice for politics.

Ah, politics. You're probably wondering why I don't just run for the White House myself.

Please. You think I'm gonna work my way up, run for city council, then mayor, then congress, then suck up to all sorts of scumbags in Washington? You think I wanna pay dues? Not this girl. Gimme the instant gratification.

So here's the deal. I'm going to find someone who has absolutely no political experience and use the power of my television network to put that person in the White House.

Pffft, you're saying. Media manipulation is nothing new. News organizations have been biased for years. We're wise to those tricks, more so than ever. We know which channel to watch if we want a Democratic point of view, and which to tune in if we're leaning Republican.

Ah, grasshopper, but said news organizations had to get in bed with politicians who were already in the game. I'm going to mold someone from scratch, someone who will do exactly what I want, when I want it. By the time I'm done I'll have that person's soul neatly tucked away in my pocket. I'll have the world on a string, with my own personal puppet in the Oval Office.

How will I get there? Well, I'm going lead your heart, soul and conscience where it wants to go. Because, and no offense here, you're all a bunch of sheep. Baa, Baa, Baa. You talk a good game about leading, and you bleat a lot when you're pissed off, but in reality you'll follow anyone who's selling your brand of snake oil. And I'm going to convince you that you need said snake oil in your medicine cabinet or you will die a horrible, grisly death while living in a hovel without indoor plumbing.

I'm going to make my snake oil so attractive to you that you won't walk, you'll run like hell to the polls on election day to vote for the person selling it. Then you'll buy a few more bottles on the way home.

So who am I? My name is Logan Vicks.

But in about a year and a half you can call me Madam President.