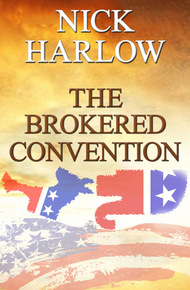 The Brokered Convention by Nick Harlow

It's every reporter's dream. And every political party's worst nightmare.

A national convention with no clear nominee for the Oval Office.

When the incumbent President who is a stone cold lock for re-election suddenly drops out due to health reasons at the last minute, both political parties are thrown for a loop. With the ultimate prize up for grabs, all sorts of candidates scramble to throw their hats in the ring. Some qualified, some not. And once the infighting starts, decorum goes out the window. Political dirty tricks are raised to an art form, as nothing is off the table with the Presidency at stake.

It's a political free-for-all.

Problem is, no one seems to have enough support to win enough delegates in order to secure the nomination on the first ballot. The result could be a brokered convention for both parties.

With the media salivating over the prospect of secret backroom deals in smoke-filled rooms, both parties are scrambling to put forth a strong candidate. But no one can agree on who that should be. Does the country want a traditional establishment politician or an outsider? And are those choices in line with the party leaders?

Bring on the backroom deals, and pass the ashtray. Got a light?

With the Republican establishment playing fast and loose with the rules and shady bargaining going on behind closed doors, ex-President Scott Maxwell and his wife, former network TV reporter Jillian Turner (from "The Race") step in and try desperately to unite the Grand Old Party while the Democratic elites do their best to steal the nomination for their preferred candidate from the people's choice.

Throw in a few wild cards like a pot smoking Senator and a philandering Bible-belt Governor, and you've got the best reality show the country has ever seen.

The result is a pair of spectacular train wrecks Americans can't stop watching.

When the dust clears, will it be politics as usual, or can the will of the people triumph over all?

The large number of Presidential candidates during this election cycle reminded me of an old Henry Fonda movie called "The Best Man" which is about a brokered convention. But I thought such an outcome could actually be a possibility this year, so I decided to take both political parties through the process in this book, raising dirty tricks to an art form. (Having covered politicians as a TV reporter and also run a few campaigns, I would put nothing past these people.) – Nick Harlow

Alex Hawk hit the mute button for the television as soon as Mitchell Jakes went to a commercial. "Maxwell's right about that. I'm not waiting."

Hawk's executive assistant, Brad Cable, nodded. "I don't blame you. Strike while the iron's hot. And it's good to be first."

"You got everything set up for tomorrow?"

"You're booked on all the morning shows after your announcement. Of course, I didn't tell them you'd be running for President. They think it's another one of your talks about gun rights."

"Well, surprise, surprise." The forty-seven year old billionaire Texan leaned back on the leather sofa, stretching out a six-foot-one frame. "They're expecting a parade of politicians to announce. Wait till they get a load of someone from the private sector who's too rich to be bought. I'll be the only one funding my own campaign. So let the games begin." The video of President Keller filled the screen. "I've only got one regret."

Hawk pointed at the television. "She already broke the ultimate glass ceiling. I wanted to do it. But what the hell. It should be a lot easier now that the country realizes women are better at this."

Most people hated billionaires. Too rich, too powerful, able to say things the rest of the world actually thought but was too afraid to speak.

But Alex Hawk was different.

When you can't possibly spend all your money in a hundred lifetimes, you can say and do whatever the hell you want, as long as you don't break the law.

And if you do, well, some of that money can be used to make people look the other way. Indiscretions magically disappear.

There weren't too many self-made business people with her kind of money. And that was one glass ceiling she had nuked down to the molecular level when she crashed the billionaire boys club. Sure, there were other ridiculously wealthy women out there with a ten-figure bank account, but they'd made it the old fashioned way.

They inherited it. Or married it. Or both.

It didn't hurt that the brash, tough-talking woman was an attractive blonde, a tower of muscle in four-inch heels who looked like she could snap the average politician in half like a twig. Her outspoken nature on gun rights had earned her a serious following with conservatives, who appreciated her take-no-prisoners and take-no-shit attitude. A former Navy Seal, she also had the backing of veterans, for whom she had raised millions from her wealthy friends.

Alexandra Hawk had grown up in an old-school, blue collar family, getting her work ethic in her grandfather's mom-and-pop restaurant. She loved the food business but knew with a little effort she could take her amazing family recipes and turn them into a golden goose. Waitressing had put her through college, but four years of jumping through academic hoops had taught her nothing about life. And you couldn't learn how to run a business from a book. That bit of knowledge came from the kitchen.

Upon graduation, her grandfather, a World War Two veteran, made her an offer. "Enlist in the Navy and when you get out the restaurant is yours. That's the deal. Serve your country and you get to manage the business. Otherwise, good luck." She jumped at it, knowing it was exactly what she needed, hitting the recruiting station the next day. Ending up in an elite SEAL unit, winning medals for bravery as she took out terrorists with ease.

Six years later on the day of her honorable discharge her grandfather tossed her the keys to the restaurant.

But Alex Hawk had something her grandfather did not.

She saw a successful business that had provided well for the family.

And she saw, after more than a half century serving food, the line for dinner was still out the door every night. The wait was more than an hour on weekends.

And no customers ever complained because the food was so damn good and the prices reasonable.

Supply was always well short of demand. And demand could use several convenient locations to serve you.

She saw an opportunity to expand that supply. But it demanded cash that she didn't have.

She made the rounds of Texas venture capitalists, who were more than happy to take an appointment with a hot blonde military heroine in a business suit who had legs up to her neck. She charmed one investor enough to bankroll her dream of franchising the restaurant. And charmed would be an accurate description. Once she'd lured him into the bedroom, the guy never knew what hit him. After one wild night with a beautiful amazon who had basically drained him of all bodily fluids he'd practically handed her the checkbook.

In two years she'd made her first million.

In eight, the business skyrocketed, she took the stock public and cracked the billion mark.

By that time, Americans knew her well. While she had never sought political office, she bankrolled enough candidates and spoke at enough conventions to make a name for herself outside the restaurant business. As a veteran from an elite unit she had the gravitas to make people listen. TV networks were more than happy to give air time to a brash, successful woman who challenged authority on a regular basis, even if they totally disagreed with her agenda. She was a war heroine, and everyone, regardless of party, supported the military even if they weren't in favor of the decisions made by the Pentagon. Her often outrageous statements meant great ratings for a news cycle. Newspaper people considered her "great copy." People ate at her restaurants, watched her on television. Often at the same time.

Alex Hawk had become a household name, and name recognition was everything in politics.

She'd been planning a run for the White House anyway after the President's second term, with A.J. Keller having paved the way by showing a woman was actually better at running the country than most of the empty suits who had occupied the Oval Office. But now this new development had fast-tracked her plan, moving it up four years.

That plan was to finish changing America. Back to the good old days. Maxwell had gotten it started and Keller was very good. She would be even better.

She would drive a stake through political correctness and kick ass. No more free rides for the millions of slugs on government assistance, no more preferential treatment for minorities, no more fringe groups making outlandish demands using the American Civil Liberties Union.

It was time for the tail to stop wagging the dog.

And she was going to be the big dog.

The Republican establishment, the group of Ivy League, old money elites, weren't gonna like it one bit. And they'd really hate her campaign promises. Especially one that would no doubt give the liberal media a heart attack and the Grand Old Party a big, Texas-sized headache.