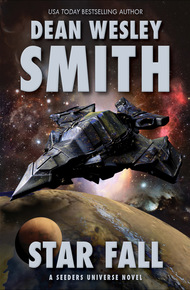 Seeders never do anything in a small way, including their sports. Matt and Carey, the chairmen of the Starburst ship Star Fall started a yearly relay race from the very front of their ship to the tail and back again. An extreme relay of over nine thousand kilometers run by ten-member teams.

But before the race could start, a scout ship vanishes inside a shielded galaxy. Who could put a shield around an entire galaxy? And why?

A galaxy-spanning tale of adventure, suspense, and the vast possibilities of space.

Nobody does scale like Dean Wesley Smith, so when I wanted extreme human adventure in worlds vast and alien, he was first on my list to ask. His Seeder's universe features a civilization so vast that it blows the Kardishev metric right out of the galaxy—as far as I can tell, it's the largest-scale civilization ever detailed in science fiction. And yet it still leaves room for the human element—love, adventure, and competition. A most unusual space-born competition features in this latest Seeder's volume, with humans pushed to the limit in a ship the size of a continent. – J. Daniel Sawyer

CHAIRMAN RAY STOOD beside his wife, Chairman Tacita on the massive bridge of their mother ship, staring at the day's battle reports coming in from hundreds of thousands of light-years of space. Around them the three tiers of stations were all filled with fifty command crew. The noise in the room was low, only a few conversations.

The fight had gone on now for over three hundred years. It would take another hundred years to mop it all up. A short time in the life of Seeders like them.

Ray's long gray hair hung down his back as he stood staring at the large screen filling one wall that scrolled all the reports. He had on his normal jeans and dress shirt. Tacita had short black hair that seemed to shine and she dressed as she normally did, with dark dress slacks and a silk blouse.

"We can't let this happen again," Tacita said, her voice her normal calm and level tone as she studied the reports.

Ray glanced at his wife, his partner for more hundreds of thousands of years than he wanted to think about. Her short black hair shaped her face, often giving her a stern look he knew didn't usually match her personality. She was still beautiful by any measure. He couldn't imagine living a moment without her.

He stood over six feet tall and didn't really tower over her. They made the perfect couple as far as he was concerned.

"I know we can't," he said. "We can never be caught off guard again by anything going on near human space. Or anywhere in the universe, for that matter."

The alien experiment they had been fighting for the centuries had threatened to overwhelm human space, destroy millions of galaxies full of human life. Only luck and the sheer brilliance of the six chairmen of three ships had saved them.

But now the battle was nearing its end and victory was at hand.

"Do you have any suggestions?" Tacita asked.

"I do," he said. "Please bring up the Starburst image."

The battle map on the big screen in front of them was replaced by what looked like a point of light with lines radiating in three dimensions from it.

"You are going to have to explain this," Tacita said.

"The center point is the Milky Way Galaxy, since that is where we have major construction facilities to build new ships for the war effort."

She nodded to that.

"Each line represents one massive ship," Ray said, "a combination battle ship and scout ship, but far larger than any of our mother ships."

"How much larger?" Tacita asked.

"Each ship should be able to hold over three million souls," Ray said. "And many thousands of scout ships and battleships."

"And their use?" Tacita asked. "I assume you intend for them to go out along these lines. Where do those lines stop?"

"We give every ship the new trans-tunnel drives and they go out five hundred years before moving over and returning on a new course back."

"Five hundred years at those speeds will take all those ships beyond any edge of space we have been able to see," Tacita said, turning to look at her husband.

He nodded. "We need to know what exists in the universe before something like the aliens finds human space."

He pointed to the starburst illustration on the screen. "All of the known universe and far beyond. And that's how we find out."