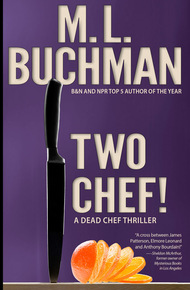 Chefs are dying! Murder in a Cooks Network TV studio!
Death of the master chef at a G-8 meeting in the Scottish Highlands!

The FBI, the British Diplomatic Protection Group, and a far too handsome U.S. Secret Service agent are on the hunt for the same ingredient:

Can she remove herself from the mix? Or will the blend of international intrigue and lawless computer hackers ruin the meal?

I met Matt Buchman through Dean Smith (see above), when I helped teach some of the writing workshops sponsored by WMG Publishing. Matt is a very successful indie author as well as a frequent StoryBundle contributor. For this thriller bundle, Matt put me in touch with some other thriller writers I didn't know personally, including Joanna Penn. – Kevin J. Anderson

Maxwell Klugman enjoyed cooking competitions, or he had until he'd almost died in one. He'd never found out if he won, because his competitor's dessert had killed both her and one of the judges. Poisoned. Enough to put a chef off his food.

A week later Kate Stark, the head judge and owner of the entire Cooks Network television station, had called to tell him the criminals were caught and to invite him back. He'd rather give up his grandmother's sausage recipe than ever set foot inside one of their studios again. Hell, he now considered Rockefeller Center in mid-town Manhattan to be a no-man zone; especially if that man was Max Klugman.

Ms. Stark had been nice to ask and he'd told her so, but…shit man.

Nicht. Nein. And no goddamn way.

Then Kate Stark had called again, just a week ago. Not about a show she was judging—she'd actually be out of the country on another project—but there'd been a last minute drop-out due to a broken leg and was he interested?

He loved sculpting in sugar.

Competitions were a different kind of adrenaline rush from restaurant work—thank god. Keeping everything running smoothly night after night in a busy restaurant like his family's, well, it was a challenge and a royal pain in the ass. Damn Pops to hell for stroking out at fifty but not having the decency to die—instead hanging on like a dangling salami and shaming Max into taking over the business.

He'd been well down the road to making it as a sugar chef and now he was worrying about a hundred details he didn't give a rat's ass about. Crappy line cooks too drugged-out to show up. Compromising his own ideas about the menu to retain their loyal customers and not piss the little fuckers off. And not becoming the Klugman who destroyed four generations of shining success and family tradition.

A sugar competition was clean, pure, and jolted the nervous system like cocaine had back when he was a younger and stupider chef.

A well-designed competition started as an adrenal high and then climbed from there—a single clear punch that left you wrung out and, hopefully, triumphant at the end.

Maxwell was good with instant gratification…nothing to do with old cocaine habits, of course.

At the very highest level of sugar-work challenges, against the top competitors, the jolt climbed over some precipice he could never achieve otherwise—not even sex with his new girlfriend. It carried him into a state of simpatico with the sculpture's hard-crack architecture—a world of precise techniques, not wondering if the bloody lump on his cutting block was actually grass-fed beef or if the fucking merchant had slipped him corn-fed instead.

German cuisine was how he made his living. The towering sculptures made of almost glass-clear sheets of pulled sugars, swirling cones of hardened ribbon sugar, and blown-sugar figurines—they were his joy. His was the only German restaurant in New York with an old meat locker turned into a dedicated sugar kitchen, maybe the only one in the world.

That Kate Stark had known that about him, and thought of him when it wasn't even her show with the scheduling issue, just told him how damned impressive the woman really was. Not his type at all. He preferred his girlfriends to be…no real way to be all politically correct about it, not quite so terrifyingly competent. Kate walked into a room and made you want to snap to attention or bow or some such shit.

The other reason he'd agreed to do it? There was no taste testing during a sculpture competition. When he'd caved to Stark's ever-so-perfectly couched pleading, he figured that no one could poison him if he did go back to the Cooks Network studio. He'd just stay focused on the competition.

Three hours into the competition, less than ten minutes left and he was lost within a sugar high—totally in the zone. He didn't need to look down at his design sketches, hadn't even at the start of the competition it was so clear in his head. He had ignored his competitors, the hot lights, the studio cameras and audience, and most of all the judges. Couldn't let those bastards into his head while he was working—even if he couldn't keep his wheezing father out.

Screw the man, this morning was his. He'd feed the fucking restaurant patrons later, right now they were his sous chef's burden.

A quick glance to either side proved that his current masterpiece was in a far different class than his two competitors'. At six feet tall, two hundred pounds of melted and reformed sugar, Elsa's castle from Disney's Frozen was a shoo-in for the win.

He had built towers, turrets, and battlements; he even built and hung the central chandelier of spun-sugar tendrils.

The competitor to his left had chosen a similar scale, but it was much simpler depiction: WALL-E's junk world was merely suggested—though her pastillage of WALL-E and EVE were damn near perfect. He wouldn't mind learning a thing or two about working soft sugars from her. Nice butt too, which he could also think of some definite uses for. He'd remember that for when the current girlfriend no longer worked out.

To his right stood an elaborate and gorgeously-colored sea anemone that included the weak-finned but undeniably cute Nemo and his worried looking dad, Marlin. It was charming, but small. Read as: "No victory for you, dude."

He so had this one.

When Maxwell pulled the ball-peen hammer out of his toolkit with less than three minutes remaining on the clock, a surprised murmur rippled through the studio audience.

It just needed one final touch.

He kept his face carefully neutral as he waved one of the cameraman in for a close-up. When he had the lens in position to spy through one of the castle windows, he made the move he'd practiced a hundred times in private.

Even the other two competitors stopped to watch what in the hell he was doing despite the last moments of the competition clock ticking down. Hang on to your silicone mats, you're gonna need 'em to shit on after you see this move. You two can just pack it up and go home now!

Reaching into the grand entrance hall through the towering double doors of his sugar castle, he lightly tapped the hammer in a circle around the edges of the main floor of inch-thick pressed sugar.

It was so retro to used pressed sugar, almost no one did anymore. It took an application of pressure and patience, waiting much longer than with other sugars for it to set. In a competition where every second was precious, it was considered to be a waste of time…by most. Pressed sugar was also cloudy and not a terribly aesthetic look at.

He made sure the camera was in the right position then he rapped the exact center of the sheet with his hammer.

The judges gasped as the sugar shattered with a sharp crack—normally a disastrous sound in a sugar sculpture.

A number of people in the studio audience cried out.

Even his petite girlfriend, who had watched him do this again and again, had her hands over her mouth; her pretty blond hair covering half her face didn't hide the anticipation and excitement. Oh, it was gonna be good with her tonight. She always did something extra special after a competition and her imagination was amazing.

Maxwell withdrew the hammer. He picked up the tiny figurine of Elsa made of blown-sugar in pale blue, white, and blond, and tacked her at the center of the crack with a bit of dampened paste. Then he stepped back and let the camera drink its fill.

The pressed sugar base had shattered. The center of the break burst outward from the struck center to terminate at each of the tiny dents he'd made around the edges.

With that final stroke, he had created a snowflake pattern in the sugar floor nearly identical to the one Elsa had created in the floor of her castle with a stomp of her heel—where the figurine's extended heel even now rested, covering the shatter point left by the hammer. The pressed sugar's cloudiness looked exactly like ice and snow.

As people saw what he'd done on the studio monitors, they roared to their feet. Even the judges were standing and applauding. Eat that, Pops! The entire television studio went nuts, he could only hope the old bastard was watching.

Unknown to anyone in the studio, a ten thousand dollar Svantek SVAN 979 sound and vibration analyzer mounted beneath the sculpture's display table measured this unusually loud volume.

The applause and cheering peaked, sending vibrations through the structure of the metal table itself.

The levels exceeded the preset threshold and an error signal was released.

Two tiny explosive charges interpreted the Svantek's error signal as a firing charge, and sheared off both legs of Maxwell Klugman's worktable on the side closest to him.

In slow motion, the legs buckled.

Elsa's ice palace of sugar crashed into Maxwell Klugman's body with a hammer blow of force that drove him to the floor and spiked him there.

His last thought ever was that he'd been done in by a Disney movie.