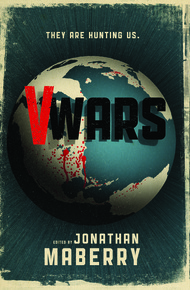 Jonathan Maberry is a New York Times bestselling author, 5-time Bram Stoker Award winner, 3-time Scribe Award winner, Inkpot Award winner, and comic book writer. His vampire apocalypse book series, V-WARS, was a Netflix original series. He writes in multiple genres including suspense, thriller, horror, science fiction, fantasy, and action; for adults, teens and middle grade. His novels include the Joe Ledger thriller series, Bewilderness, Ink, Glimpse, the Pine Deep Trilogy, the Rot & Ruin series, the Dead of Night series, Mars One, Ghostwalkers: A Deadlands Novel, Kagen the Damned, and many others. He is the editor of many anthologies including The X-Files, Aliens: Bug Hunt, Don't Turn Out the Lights, Aliens vs Predator: Ultimate Prey, Hardboiled Horror, Nights of the Living Dead (co-edited with George A. Romero), and others. His comics include Black Panther: DoomWar, Captain America, Pandemica, Highway to Hell, The Punisher and Bad Blood. He is a board member of the Horror Writers Association, president of the International Association of Media Tie-in Writers, and the editor of Weird Tales Magazine. Visit him online at http://www.jonathanmaberry.com.

Every culture has its own folklore of deadly creatures of the night. But what if these tales are actually based on fact? Now, the nightmare creatures are returning—and they are hungry.

V-WARS chronicles the first Vampire War, from the savage murders committed by "patient zero" of the V-Virus plague, to full-out battles with vampire terrorist cells.

New York Times best-seller and multiple Bram Stoker Award-winning author Jonathan Maberry enlists fellow masters of horror to report from the V-WARS frontlines in this epic, innovative, and most of all, thrilling novel of vampire vs. human conflict.

You can't think of "thriller" without thinking of Jonathan Maberry. (Well, I can't anyway.) His Joe Ledger series and his Rot & Ruin series are mainstays for anyone who likes to have their pulse race when they're reading. Jonathan wrote the introduction to my Dan Shamble, Zombie PI collection, WORKING STIFF. I am writing the introduction to his collection of stories about Sam Hunter, Werewolf detective. He was one of the first writers I approached when putting together the thriller bundle, and he suggested his V-WARS shared-world series. I have a story in the second volume, and I am very happy to have the first volume in the bundle. – Kevin J. Anderson

As great grandnephew of Bram Stoker, I am frequently asked if the new variations of vampire characters in today's literature, plays, and movies are offensive to members of the Stoker family. Is great deviation from Count Dracula, long considered the "gold standard" of vampires, bordering on sacrilege? My answer is to the contrary; vampires have never been static, to survive they have adapted though the ages. Their very nature allows them to shape shift to affect camouflage and to adapt particular human characteristics in order to attract or horrify their victims. As the subjects of fiction, vampires have always willingly submitted to the vagaries of the pen, ensuring constant entertainment for readers and fans.

Although Count Dracula is the most famous vampire character of all time, Bram Stoker never implied the vampire was his invention or suggested the Count was the first vampire in literature. Years before Bram dreamed of Dracula, John Polidori wrote "The Vampyre" (1819) and J. Malcolm Rymer wrote Varny the Vampire(1847). It is logical to assume Bram was familiar with both, and that aspects of each influenced the writing of Dracula (1897).

This excerpt from the introduction to The Vampyre (1819) reveals significant detail about how folklore of Eastern Europe and beyond slowly gained credibility, so that when vampires appeared in English literature, readers were more likely to believe these bloodsuckers really existed.

The superstition upon which this tale is founded is very general in the East. Among the Arabians it appears to be common: it did not, however, extend itself to the Greeks until after the establishment of Christianity; and it has only assumed its present form since the division of the Latin and Greek churches; at which time, the idea becoming prevalent that a Latin body could not corrupt if buried in their territory, it gradually increased, and formed the subject of many wonderful stories, still extant, of the dead rising from their graves, and feeding upon the blood of the young and beautiful. In the West it spread, with some slight variation, all over Hungary, Poland, Austria, and Lorraine, where the belief existed that vampyres nightly imbibed a certain portion of the blood of their victims, who became emaciated, lost their strength, and speedily died of consumptions; whilst these human bloodsuckers fattened — and their veins became distended to such a state of repletion as to cause the blood to flow from all the passages of their bodies, and even from the very pores of their skins.

The one hundred and twenty five pages of notes that Bram used to write Draculashow how he pieced together Count Dracula and his tale. They show how he blended commonly known folklore and mythology, with other historical information readily available to him in his own library, the British Museum, and most effectively with his own on site observations in London, Whitby, and Cruden Bay (Port Errol) The resulting creature, and the fear he incited is of course legendary.

Just a few months after Dracula was released in 1897, Bram explained to Jane Stoddard from the British Weekly, how he created his version of the vampire. He could never have imagined that his vampire would eclipse the original historical myths on which he based his story.

"He told me, in reply to a question, that the plot of the story had been a long time in his mind, and that he spent about three years in writing it. He had always been interested in the vampire legend."

"It is undoubtedly," he remarked, "a very fascinating theme, since it touches both on mystery and fact. In the Middle Ages the terror of the vampire depopulated whole villages."

"Is there any historical basis for the legend?"

"It rested, I imagine, on some such case as this. A person may have fallen into a death-like trance and been buried before the time. Afterwards the body may have been dug up and found alive, and from this a horror seized upon the people, and in their ignorance they imagined that a vampire was about. The more hysterical, through excess of fear, might themselves fall into trances in the same way; and so the story grew that one vampire might enslave many others and make them like himself. Even in the single villages it was believed that there might be many such creatures. When once the panic seized the population, their only thought was to escape."

"In what parts of Europe has this belief been most prevalent?"

"In certain parts of Styria it has survived longest and with most intensity, but the legend is common to many countries, to China, Iceland, Germany, Saxony, Turkey, the Chersonese, Russia, Poland, Italy, France, and England, besides all the Tartar communities."

"In order to understand the legend, I suppose it would be necessary to consult many authorities?"

Mr. Stoker told me that the knowledge of vampire superstitions shown in "Dracula" was gathered from a great deal of miscellaneous reading.

"No one book that I know of will give you all the facts. I learned a good deal from E. Gerard's 'Essays on Roumanian Superstitions,' [sic] which first appeared in The Nineteenth Century, and were afterwards published in a couple of volumes. I also learned something from Mr. Baring-Gould's 'Were-Wolves.' Mr. Gould has promised a book on vampires, but I do not know whether he has made any progress with it."

In Bram Stoker's Notes for Dracula (Rosenbach Museum) references include The Book of Were-Wolves (1865) by Rev. Sabine Baring-Gould. Bram's description of Count Dracula: canine teeth, pointed fingernails, hairy palms, and bushy eyebrows, illustrates that Bram associated the vampire with the were-wolf, just as many cultures, link the two creatures as allies with darkness and the supernatural.

Excerpt from The Book of Were-Wolves:

"Among the Bulgarians and Slovakians the were-wolf is called vrkolak, a name resembling that given it by the modern Greeks ….The Greek were-wolf is closely related to the vampire. The lycanthropist falls into a cataleptic trance, during which his soul leaves his body, enters that of a wolf and ravens for blood. On the return of the soul, the body is exhausted and aches as though it had been put through violent exercise. After death lycanthropists become vampires.They are believed to frequent battlefields in wolf or hyena shapes, and to suck the breath from dying soldiers, or to enter houses and steal the infants from their cradles …."

Many characteristics of Dracula's precursors, were not applied by Bram to Count Dracula, but surfaced in subsequent effective vampiric personifications. But, it was without a doubt Bela Lugosi's Count Dracula who cemented the vision of a suave aristocratic vampire on stage (1927) then on screen (1931). Even today, around the world, the stereotypical vampire sports a black cape, dinner jacket, fangs, and eastern European accent, and is instantly recognizable by people of all ages.

Lugosi's Count Dracula has largely been retired to the costume shop. Vampires are no longer the aristocracy, today they are commonplace, living among the common man. Tolerance of the rebel, the bad boy, and the alien among us, has affected a divergence in the modern vampire genre. In contrast to the classic, evil, merciless vampire perfected by Bram, our world of inclusion welcomes vampires. Not only outcasts worthy of our pity and compassion, their sexual power and freedom are envied, certainly a far cry from the more solitary, grotesque, horrifying creatures of the past.

In the Introduction to Blood Read (1997) Joan Gordon and Veronica Hollinger comment on the work Vampires, Burial and Death, by cultural anthropologist Paul Barber: "How powerful the vampire's grip has been throughout history and across cultures and reminds us that the myths and legends surrounding the vampire do not describe an actual physical being, but something much more powerful, a creature who can take on the allegorical weight of the changing times and widely varying collective psyches."

The authors in V-WARS address the age-old issue: What would happen if vampires were real, and what would they be like if they adapted to our present world? What qualities would make the vampires more efficient predators, and at the same time keep them attractive and entertaining to the readers and fans of the modern vampire genre?

These stories explore the myth of the vampire from a variety of perspectives and incorporate the undead in new and intriguing situations. While their metaphorical roles remain consistent with historical vampire myth, in the mind and hand of each author the creatures have managed to adapt to the changing attitudes in our society. The vampires in V-WARS exemplify the evolution necessary for their survival.

V-WARS lets us glimpse into an older, darker world of vampires. There are no romantic heroes. Nothing sparkles. At the same time there is an exploration of the nature of the vampire. If they exist, are they merely monsters, or are they something far more complex? And, what does that mean for us? What does that mean when their nature drives them into conflict with ours?

So … lock your doors and close the shutters. It's dark out there. Settle back and read on. You'll find it's dark in here, too.