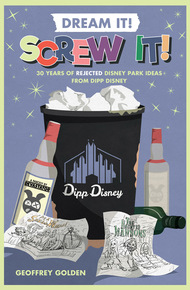 Geoffrey Golden is the bestselling author of Frankenstein's Girlfriend, Snarkicide, and co-author of Grosslumps. He also writes Sesame Street comics and (not a joke) Disney Princess comics. Geoffrey lives in West Hollywood, CA with his wife Amanda and their cat Gilda. His favorite Disney attractions are Alien Encounter (closed), Journey Into Imagination (the old version), and Muppet*Vision 3D (doomed).

Dream It! Screw It! by Geoffrey Golden

Disney theme park Imagineers think up hundreds of ideas for rides and attractions that never get used. But no Imagineer has created more terrible and rejected ideas than Dipp Disney. Walt's cousin was a sloppy drunk, a complete idiot, and a lovable showman, whose 7000 attraction ideas never saw the light of day... until now.

"One of our newest releases, not only is this book full of crazy ride and attraction concepts, but Geoffrey Golden, who's a huge Imagineering nerd (and a writer for Disney Princess comics) ambitiously created an entire alternate reality of Disney Imagineering that perfectly layers over the real history of the theme parks. He uses real and fictional characters to write jokes that will hit any Disney fan on multiple levels. The art by Shing Yin Khor, Elan' Trinidad, Reid Psaltis, and Marc Palm ape actual art styles from real Imagineers, and heighten the absurdity of all the rides. Beware of the sharp, sudden laughs that will fly out reading this one." – Amanda Meadows

Like many pleasant, childlike men before me, I once pursued a career as an Imagineer for Walt Disney theme parks.

It's a highly competitive and sought after position. Only those who complete the Four Challenges of Goofy...

Design an attraction so perfect, only God could ride it.

Develop a strategy to "Imagineer" massive layoffs without alerting the press.

...may enter Disney's Great and Mighty Glendale Office, headquarters of Walt Disney Imagineering (WDI). Years ago, I befriended a man at a comic book

convention named Buddy Smiler. (That wasn't his real name, of course. His given name was Tad Winkler.) He worked at Imagineering for 25 years as a Disposal Copywriter. Buddy's job was to write the phrases put on trash cans around the park. He considered "Toss It, Friend!" to be his magnum opus. I was interested in meeting with Buddy to get his insight on how to break in at Imagineering, but he said he'd "do me one better."

He gave me box upon box of writing by an Imagineer named "Dipp," along with artwork drawn by staff artists to illustrate his proposals. Disney's powers-at-be attempted to throw these files away at one point, but Buddy – who was encouraged to take an obsessive interest in all things garbage — decided to rescue this lifetime of work from the cruel fate of Daisy Duck's Disposal Truck.

Dipp Disney was Walt Disney's cousin. He worked at Imagineering for 30 years, but he didn't become a household name like famous megastar Imagineers Zip Winkle, Martin O'Mallard or Larry Beans. So who exactly was he? Buddy's files paint a portrait of an optimistic, energetic showman who kept on trying, no matter the odds. They also suggest Dipp was really, really stupid. And a drunk. And possibly a sex addict?

Supplementing Dipp's work is a "permanent record" of sorts, also rescued from the "Waste Please." There were copious notes taken about Dipp by another legendary Imagineer, Morton Dobbs. According to records, Morton was assigned – by Walt himself – to keep tabs on Dipp, and he never stopped, even after Walt's death. In fact, after Walt's death, Morton's notes increased twenty-fold!

"If you really want to understand Imagineering," Buddy advised, "study the life of Dipp Disney. Also, please take all this garbage. I can't live in trash anymore. I'm 87."

Through these documents, I pieced together the life and work of an unusual and forgotten

artist. What you'll find in this volume is just the tip of the iceberg. As an official Creative Consultant at Imagineering, he generated 7000 theme park ideas, none of which were ever utilized. It's an incredible story, which I wanted to share with other fans of Disneyana, theme park design, and general sadness.

I hope you are ready, dear reader, for the incredible ride that was the life of Dipp Disney. There are more twists and turns than Space Mountain, with a story more preposterous than The Little Mermaid: Ariel's Undersea Adventure, and it's sure to make you queasier than the Tea Cups.