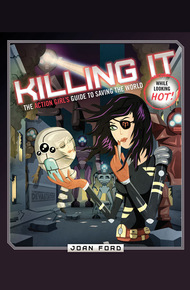 Joan Ford is a writer who lives on the edge of darkness, which is in Los Angeles. She is a regular performer at The Upright Citizens Brigade Theatre and her work has been featured on a bunch of websites her parents have never heard of. She's seen a lot of action movies in her life and in her opinion, every Die Hard film should take place on Christmas Eve.

Killing It! by Joan Ford

Killing It! is a secret weapon for the modern day action heroine. This savagely hilarious guide covers all the fashion, etiquette, and ballistics tips every woman needs, according to all the blockbuster movies written and directed by men! Joan will help you perfect the impossible balancing act of being an all-powerful badass while remaining vulnerable, sexy, and super chill about men getting all the glory.

"It's only fitting that the movie buff and seasoned comedy writer who brought us Seinfeld: The Purge – Joan Ford (Nerdist, UCB) – would make this guidebook. Killing It explains, in devastatingly true and hilarious detail, how to be a Strong Female Character in an action film written and directed by men. This is a bonkers funny and savage takedown of sexist tropes in movies that spews with running gags – like one about a hero team called B.U.G. Force – and scintillating illustrations by Spencer Dina, Mike Reddy, and John Matthias." – Amanda Meadows

So, you want to be an Action Girl? You've spent years turning your body and mind into nely tuned instruments of pure destruction, and now you're ready to unleash your inner "strong female character?" Well, hold up. You may have the "strong" part down, but we gotta work on the "female."

Hey! My name is Joan Havok. I'm an agent for The Knight's Guard, a top secret global defense agency, and for years I've been walking that razor-thin line between woman and warrior. I've learned how to dismantle a bomb without breaking a nail, how to outrun a reball without breaking a heel and how to ght alongside the big boys without breaking any of the thousands of social contracts that dictate how men and women should act at all times.

Figuring all this out wasn't easy. No one gave me a ash drive full of schematics about how to survive as a lady in today's crazy modern world. Wesley down in the tech department never built me a quantum, stealth cloak to make me invisible in embarrassing social situations. And Admiral Zorn taught me seventeen ways to kill a man, but could he tell me how soon to text a guy after a first date? NOPE!

That's why I need to share all this stuff with you. (The "how to be a girl" stuff! I'm sure you already know plenty of ways to kill a man.) I wanted to create the de nitive guidebook for all the aspiring Action Girls out there. And yeah, I know what you're thinking: Joan, isn't it wildly sexist to imply that if someone follows a bunch of arbitrary rules she'll be more of a girl than someone who doesn't? Isn't the whole premise of this book wildly problematic?

SHUT UP! The only problem with this book is that you're overthinking it. The worst thing you can do on any mission is overthink it.

If you take the advice in the pages that follow, you won't have to think about anything anymore. Every situation or scenario you could ever encounter as a woman will be thoroughly covered in this eighty page illustrated book. It's all the stuff we were too embarrassed to ask our moms, and also you couldn't because your mother was murdered in her laboratory when you were only seven by a Russian assassin screaming, "WHERE IS IT? WHERE IS THE KRATOS SERUM?" (If only my scientist mother had told me what the Kratos Serum was when she was giving me all those injections as a child...)

So don't stress, and don't sweat... 'cause your makeup will run if you start sweating. Being an Action Girl can be hard, it can be confusing, and sometimes it can make you want to throw up your hands and let the Brotherhood of S.T.A.B succeed in overthrowing all of the world's governments. But if you follow my lead, you'll be Killing It!