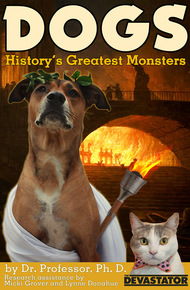 Author Micki Grover has been published by the St. Petersburg Times, McSweeney's, and countless online outlets.

Dictators. Murderers. Corrupt businessmen. According to Dr. Professor, PhD (the feline author of Cats You Never Learned About in History Class), "very bad" dogs have committed horrible atrocities on human society for years. These are the secret stories – and photos! – of adorable canines who were man's best enemies.

"Indomitable writing team Lynne Donahue and Micki Grover (McSweeney's) are no strangers to The Devastator, having written some of our favorite comics and articles for our ol' anthology. They also wrote our most smash-hit zine, Cats You Never Learned About in History Class. Now, that same cat professor is back with a tome on the dogs of history, and lemme tell you, it's not pretty. 'Man's best friend?' More like, 'bad man's best accomplice.'" – Amanda Meadows

The "golden age" of piracy was in the 17th and 18th centuries. Notable pirates such as Blackbeard and Henry Morgan did their dastardly work, plundering aboard vessels and at ports instead of getting an honest job.

Archibald Mercer became a seafaring Border collie at a young age when the captain of a trade ship brought him on-board to keep the rat population down. Never send a dog to do a cat's job. Archie was terrible at it and actually befriended the rodent population. But a worse fate befell the ship captain when a band of pirates took over. Unaware of his own body size, Archie "accidentally" sent his old master overboard while allegedly trying to give him a kiss. He was celebrated by the pirates and dubbed "Mad Dog," as they surely would have lost without his help.