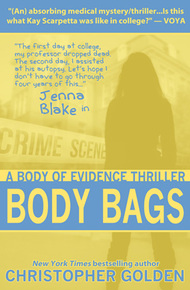 Christopher Golden is the award-winning, bestselling author of such novels as The Myth Hunters, Wildwood Road, The Boys Are Back in Town, The Ferryman, Strangewood, Of Saints and Shadows, and (with Tim Lebbon) The Map of Moments. He has also written books for teens and young adults, including Poison Ink, Soulless, and the thriller series Body of Evidence, honored by the New York Public Library and chosen as one of YALSA's Best Books for Young Readers. Upcoming teen novels include a new series of hardcover YA fantasy novels co-authored with Tim Lebbon and entitled The Secret Journeys of Jack London.

A lifelong fan of the "team-up," Golden frequently collaborates with other writers on books, comics, and scripts. In addition to his recent work with Tim Lebbon, he co-wrote the lavishly illustrated novel Baltimore, or, The Steadfast Tin Soldier and the Vampire with Mike Mignola. With Thomas E. Sniegoski, he is the co-author of the book series OutCast and The Menagerie, as well as comic book miniseries such as Talent, currently in development as a feature film. With Amber Benson, Golden co-created the online animated series Ghosts of Albion and co-wrote the book series of the same name.

As an editor, he has worked on the short story anthologies The New Dead and British Invasion, among others, and has also written and co-written comic books, video games, screenplays, the online animated series Ghosts of Albion (with Amber Benson) and a network television pilot.

The author is also known for his many media tie-in works, including novels, comics, and video games, in the worlds of Buffy the Vampire Slayer, Hellboy, Angel, and X-Men, among others.

"The first day at college, my professor dropped dead. The second day, I assisted at his autopsy. Let's hope I don't have to go through four years of this..."

When Jenna Blake starts her freshman year at Somerset University, she's not only living on her own for the first time, she's moving closer to the father she never really knew. It's an exciting time, filled with new faces and new challenges, not to mention parties and boys and...corpses?

Jenna is torn about her future. She'd like to be a doctor like her mother, but she can't stand the sight of blood. Her father, a criminology professor, thinks he has the answer—and sends her to interview for a job with the Medical Examiner—an interview that takes place in the middle of an autopsy!

When a congressional aide goes violently insane, and then drops dead, the pathology team at Somerset Medical Center discover that his brain was ravaged with disease—and loaded with insect larvae. When Jenna takes on her new job, she is drawn into a web of terrifying disease, dangerous politics, and intriguing mystery. And when one of her professors ends up dead, she starts making connections even the police haven't seen...which will bring her face to face with a pair of killers, one medical, and one all too human.

"Chris is a master at suspense and his Body of Evidence series clearly illustrates his skill with the genre."

"Penny for your innermost secrets," her father said.

Jenna blinked.  She'd been drifting, and with good reason. It had already been a wild day -- maybe the most exciting day of her life, though very little had happened. Except for that whole first day of college thing, she thought, smiling to herself. But add to that her father's idea; a suggestion for her career track that had taken her totally by surprise.

I mean, a medical examiner? she thought.

"Well," said her father, reasonably, "it might solve your problem with bleeding, and, let's face it, when you're dealing with a corpse, you don't have to worry about making a fatal mistake."

She stared at him. "Dad, that's disgusting."

But she was thinking about it.