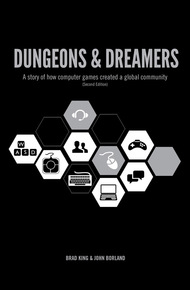 Brad King earned his master's from the University of California at Berkeley's Graduate School of Journalism in 2000. While there, he won the Wired magazine "Excellence in Technology Writing" award. After graduating, he worked for Wired and Wired.com. In 2004, he was the producer and senior editor for the MIT Technology Review Web operation. He's been an advisory board member for South by Southwest Interactive for more than a decade. King is currently the co-director of Ball State University's Center for Emerging Media Design & Development, and an associate professor of journalism.

John Borland has been writing about technology and its effects on popular culture, politics, and communication since the mid-1990s. A graduate of Stanford University and the University of California at Berkeley's Graduate School of Journalism, he began his reporting career covering politics and elections for the California Journal in Sacramento. With more than a little geek in his blood, he migrated to the Internet early, working for CMP's TechWeb and then CNET News for nearly a decade. At CNET, he won a number of national and regional journalism awards, including the Society of Professional Journalists' Sigma Delta Chi award, the Society of American Business Editors and Writers' Best in Business award, and the Northern California SPJ's Excellence in Journalism award. Since 2006, he has lived in Berlin, Germany, as a freelance writer.

Computer gaming reaches back to Dungeons & Dragons, the popular paper game that let storytellers lead their charges through mystical worlds where the only limitation was imagination. Millions would play the game, but it would particularly resonate with a group of kids who were in the midst of discovering the birth of home computers.

The first time Richard Garriott played Dungeons & Dragons, the tabletop role-playing game, he was hooked. The game was a mix of imagination, storytelling, and social interactions played in small groups. The intimate setting and the interactive nature of the game meant that no two adventures were ever the same. That game, and Garriott's fascination with it, helped inspire the modern computer game landscape, which now include sprawling real-time pervasive worlds filled with millions of players around the world.

By the late 90s, sports, war simulations, and relationship games found their place. Millions of people were logging onto their computers, making friends, and playing. But, always at the heart of computer gaming, were people who wanted to create worlds where people could gather and play. For years, people dismissed those worlds and those players. In doing so, they missed the compelling stories of not only the people like Garriott who wanted to develop these large story worlds, but also the players who have increasingly exerted their own control on these spaces and created rich friendships and group collectives.

Today's modern computer games have become a central part of American culture, and they are far more than just virtual spaces where people hack-and-slash each other with swords or mow each down with guns. These games are as varied as the books in a library, and Dungeons & Dreamers tells the story of what it means to live and thrive in virtual communities.

"This history connecting D&D to the games that came afterwards goes heavy on some of the most beloved parts of PC game history, from id Software to Origin and way beyond - a well-written tome that's arguably somewhat slept-on today." – Simon Carless

On a cool fall afternoon in 1972, a trio of Minnesotans pulled into Lake Geneva, Wisconsin, a picturesque lakeside town about an hour north of Chicago. They puttered through the four-block downtown, pulling into a driveway just a few streets outside the tiny main street. Two of them, Dave Arneson and Dave Megarry, anxiously rechecked their bags as they emerged from their car. They'd driven across the state in part to show off games they'd made. If they'd forgotten anything, it was too late to go back, but they wanted to make sure all their materials were in order.

Lake Geneva then, as now, was an unlikely gaming mecca. A resort town with a population of five thousand people, (a figure that quadrupled in the summer when people came to swim in the lake's uncharacteristically clear, rock-bottomed waters), it had been better known as the summer home for wealthy families such as the chewing-gum Wrigleys and the home-appliance Maytags. It was also home to the thirty-four-year-old Gary Gygax, a game player and game writer whose peripatetic energy and immense curiosity had already earned him a prominent place in a community of Midwesterners fascinated by military- and history-themed games.

Arneson and Gygax had met before, at the Gen Con gaming convention that Gygax had started in Lake Geneva a few years earlier. The two had collaborated on a sailing game called Don't Give Up the Ship. Now Arneson was working on a new adventure game with a style of play that was as close to theater as it was to the community's wargames—open-ended miniature soldier battles that involved players moving figurines around an open play space as opposed to a more traditional board. Megarry, too, had been trying out a new board game, played more conventionally with dice and cards, but set underground in a monster-infested dungeon. Gygax had heard about them and wanted to see both.

"Come on in," Gygax told the visitors. "I'll show you around."

He let them inside, showed them where they would be sleeping, and then led them down to the basement. Gygax had built a sand table, twelve feet long by six feet wide, where his usual weekend group played its open-ended, often war-themed games. One of these was Gygax's own Chainmail, in which players used little figurines, improvisational storytelling, and dice rolls to simulate medieval battles. He'd recently modified the game, adding elements of fantasy, such as trolls and dragons and magicians that shot fireballs, (which, not so coincidentally, had the same blast radius as the cannons used for other games played on this table). The new version had proved wildly popular, sometimes attracting as many as twenty or thirty gamers to the table.

As the sun set, the little group gathered upstairs to play at Gygax's dining room table. A few other people from the Lake Geneva scene had joined them, including Gygax's own twelve-year-old son, Ernie. They tried Megarry's game first. The players traversed a board made of graph paper, running into monsters and fighting them with magic spells. "I said, 'Wow, this is a great adaptation.' It was Chainmail in a dungeon," Gygax remembered later.

Arneson went next. A heavyset, spectacled young man a few years younger than Gygax, with a big, mischievous smile, he launched them into something very different. The players had to make characters and give them attributes that would determine how strong or smart they were. Those attributes would help them when they attacked monsters or tried to figure out puzzles in the game. Once the characters were created, the game would begin. The players would act out the characters' roles as they wandered through the swamps of the haunted Castle Blackmoor, doing their best to stay alive. Arneson would play the godlike role of game master, telling the story of what was happening to the characters at any given moment and letting them decide as a group what to do next. Would they fight the monster? Would they run away? Would one member of the group steal everyone else's treasure and hightail it for a safe house? It was a little haphazard. Arneson kept rules scrawled in a notebook full of loose-leaf sheets of paper, and anything he didn't know, he simply made up on the spot. He'd been doing this with his own group of gamers for almost a year now in Minneapolis, and was comfortable using his rules as a framework to guide the improvisational nature of the game's storytelling.

"Deep in the primeval swamps of Lake Gloomey, shrouded in perpetual mist, lies the city of The Brothers of the Swamp," he started, and the party of adventurers was off.

By the end of the weekend, Gygax and the rest of the Lake Geneva crowd were enthusiastic. Collectively they saw the tabletop-gaming experience, the underground dungeon exploration scenario, and this improvisational role-playing mode of gaming morphing into a something new. Arneson gave Gygax copies of his notes from which to work, and Gygax began creating a full set of rules, drawing from these and from Chainmail, and making up new elements to fill in the blanks. By the time he finished a draft of the 150-page rule book early the next year and began showing it around to his friends, he had a name for the new game: Dungeons & Dragons.

"We were having a tremendous amount of fun, but we figured we were crazy," Arneson said years later. "We had no inkling that this would turn out to be something so big."

Big indeed: Over the next quarter-century and more, the game conceived in Gygax's living room would go on to obsess millions and transform people's lives. Its draw would be particularly strong within a community of, mostly, young men who were at the same time discovering the power and creativity offered by computer programming. In seeking to combine these two loves, this group of programmers, developers, and game players would over time profoundly shape an industry that would ultimately come to rival Hollywood in terms of scope and influence.

Among the myriad young people who fell in love with the social storytelling of Gygax's games and sought to replicate their dungeon-crawling experiences in digital form was Houston teenager Richard Garriott. A programming novice when he first started this work, Garriott would go on to become one of the industry's leading figures, creating a series of games that entranced players for more than two decades. His work and experiences are as representative as any of the euphoria and creativity—and at times, the heartache—that defined the computer gaming industry as it grew and matured.

Garriott's medium wasn't that of Gygax, Arneson, and Megarry. But it owed a vast debt to them and their work. That afternoon in Lake Geneva carried the seeds not only of a geeky tabletop pastime, but of an entertainment industry and culture that in the course of decades would sweep across the world.