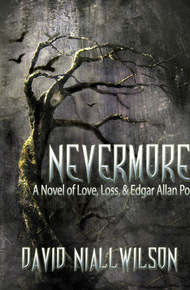 On the banks of Lake Drummond, on the edge of The Great Dismal Swamp, there is a tree in the shape of a woman.

One dark, moonlit night, two artists met at The Lake Drummond Hotel, built directly on the borderline of North Carolina and Virginia. One was a young woman with the ability to see spirits trapped in trees and stone, anchored to the earth beyond their years. Her gift was to draw them, and then to set them free. The other was a dark man, haunted by dreams and visions that brought him stories of sadness and pain, and trapped in a life between the powers he sensed all around him, and a mundane existence attended by failure. They were Eleanore MacReady, Lenore, to her friends, and a young poet named Edgar Allan Poe, who traveled with a crow that was his secret, and almost constant companion, a bird named Grimm for the talented brothers of fairy-tale fame.

Their meeting drew them together in vision, and legend, and pitted their strange powers and quick minds against the depths of the Dismal Swamp itself, ancient legends, and time.

Once, upon a shoreline dreary, there was a tree. This is her story.

"This is one of the best, if not THE best, books that David has produced in his long career and it was a perfect choice for our supernatural thriller entry."

Edgar wrote furiously.  He had tossed aside his story in progress after only a few moments and begun anew.  The words flowed so quickly through his thoughts that his fingers were cramped, and more than once he'd had to toss aside a pen and just grab another in fear of losing the thread.

It was like nothing he'd ever written before.  He tried, just for a couple of moments, to pinpoint the inspiration.  All of his writing came from twisted versions of things he'd seen, or done, or read.  This was unfamiliar, raw and very powerful, and he had no idea why it had come to him.

Grimm had stepped closer, bending his head inquisitively toward the paper.  The bird rarely showed any real interest in what he did, and this was another thing he wished he had the time to contemplate, but he knew the old magic when it wrapped around him, and he sensed nothing malign in whatever this was.  Even if he had, he would not have pulled away.  He trusted Grimm to drag him back to reality if he got in over his head, and he'd had just enough of the whiskey in his flask to unleash his own shadows.  He could be dangerous himself, if provoked, though he preferred to direct that at the pages, impaling them with quills and staining them with the ink of his nightmares.

The story grew from the roots of a great tree.  It stretched up into shadows.  He frantically recorded his impressions, the moon's face glaring down through intricately bound branches.  Eyes – dark, hollow eyes without life – stared back from the heights, and the mist from some hidden body of water rose like tendrils of cloud to slip in and out between those branches, leaves, and ghostly-images.

Beyond the tree, he saw an open stretch of ground.  In that space, two men faced off.  One was tall and blonde, beefy and intense.  The other was dark.  He blended into the chilly air and the wisps of mist.  His eyes were cold, dead chips of ice, and though he stood at an odd, ungainly angle, there was a sense of speed and confidence in the angle of his chin, and the loose way his hand hovered over the butt of a holstered pistol.