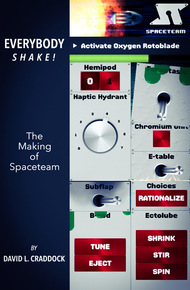 Everybody Shake! - The Making of Spaceteam by David L. Craddock

To most game developers, adding such illustrious franchises to their résumés would be tantamount to winning the career lottery. To Henry Smith, they were stepping stones on the path to forging virtual worlds of his own.

Assembled from interviews with the developer, caramelized onions, eulogized crews, and a voltsock meter cranked all the way up to 3, Everybody Shake! The Making of Spaceteam follows Henry Smith on his journey from creating shareware games on Apple Macintosh and attaining senior positions at mega publishers BioWare and Electronic Arts, to the inception and creation of Spaceteam, his indie opus that revolutionized cooperative gaming and made shouting at your friends not just fun, but necessary.

"David's work is always journalistically well-crafted, and we'll be featuring a number of his 'Singles'-sized profiles of interesting games and developers in this and other upcoming StoryBundles. This particular one - on the hilarious Spaceteam - does a great job in getting under the surface." – Simon Carless

Henry Smith's breakout job as a junior programmer at Irrational Games, almost wasn't. "There were only about 15 to 20 people, and I was there as basically an intern. Initially an unpaid intern until I made a few desperate phone calls a couple of weeks before I was scheduled to start, saying, 'Uh, no, I thought I was going to be paid for this job.' Luckily, they agreed to pay me something."

Secure in the fact that he would indeed receive a paycheck for his efforts, Smith slipped right into Irrational's stream. The company had been co-founded in 1997 by ex-Looking Glass Studio employees Robert Fermier, Jonathan Chey, and Ken Levine. At the time Smith joined, the tiny studio had recently released its action/RPG/survival-horror thriller System Shock 2 to critical acclaim. The team shifted focus to developing a game for the still-unreleased PS2 called The Lost.

According to information divulged from Irrational's semi-regular "From the Vault" series of Web diaries exploring the studio's cancelled titles, The Lost was an amalgamate of popular game conceits: a survival-horror adventure portrayed from a third-person perspective, like Konami's chilling Silent Hill series, combined with nonlinear elements of Nintendo's The Legend of Zelda series and Capcom's Devil May Cry, such as giving players the freedom to tackle levels in an order of their choosing.

At first, Smith enjoyed working on The Lost. He was one of only four or five programmers in the studio, so he got to touch practically every line of code being written. When 2002 rolled around, he was fidgety. Game programmers lived and died according to the shipped titles listed on their résumés. Smith had been at Irrational nearly three years and still had no shipped games under his belt. He made the decision to leave and finish his education, polishing off the requirements for his bachelor degree in mathematics.

Finally, in 2004, Smith interviewed at BioWare Edmonton and secured a job that led to his first shipped product — Dragon Age: Origins, the inaugural entry in the studio's long-running high-fantasy RPG series. Smith was brought on as the senior graphical user interface (GUI) programmer, a job into which he poured a great deal of passion and time. As the senior programmer on the user interface, he had autonomy over its look and feel. When his work wrapped up, he transferred to BioWare's Montreal studio and lent his expertise to the GUI for Electronic Arts' Dead Space 2.

Over time, Smith became more and more enamored with designing interfaces. "That was my specialty, and has been for many years now. I like doing it, and I care about good UI. It really bothers me when games have bad UI. It's also something that nobody else seems to care about. Companies don't seem to give it enough thought or people. Often, there isn't even a user interface designer; the UI just gets designed by programmers and managers, and 15 people will have their fingers in the pie."

Smith was in his element working on Dead Space 2. The first game, released in 2008, had garnered acclaim for its chilling atmosphere, sci-fi story, and tight controls. Those controls were a natural extension of the game's interface. Instead of cluttering the screen with ammo counters and hit points, EA Redwood Shores (EARS) melded those and other UI elements into the gameplay: ammo was displayed on the player's current weapon, a health bar grafted to the back of protagonist Isaac Clarke's spacesuit drained as he took damage, and his inventory was displayed as a span of squares that opened as a holographic projection from the player's suit.

Dead Space 2 deviated from the road paved by its predecessor. Alongside a single-player-only campaign crafted by series creator Visceral Games, Dead Space 2 featured a suite of multiplayer modes designed by BioWare Montreal. The idea was that splitting up the workload would allow the developers at Visceral to concentrate on the single-player portion, while the crew up in Montreal handled the multiplayer modes. Smith and his colleagues strived to weave elements such as how many objectives the player's team had accomplished, and the names of their partners and opponents, into the UI in an organic way. The work was satisfying; the real challenge lay in appeasing the devs at Visceral, who often seemed territorial over the Dead Space IP.

"There were definitely some challenges working remotely, because we were sort of an unknown team in Montreal. I remember the people working on the main game were a bit hesitant for us to come in and start changing stuff. We had to work to gain their trust."

In 2010, Smith finished his obligations on Dead Space 2 and moved on to speccing out the multiplayer mode for Mass Effect 3. Known as Galaxy of War, ME3's multiplayer component groups players into squads of four and tasks them with completing special missions that influence the outcome of their personal stories in the single-player campaign. More exciting to Smith, however, was that many of his old friends from BioWare Edmonton transferred to the Montreal location, making his work on Mass Effect 3 something of a reunion. But the best part of his job at BioWare was the company's stance on outside projects.

"I was interested in doing my own projects on the side, and BioWare let me do that for a long time. I had to basically tell them what I was doing, and give them a CD with all the stuff I had done, and they locked it up somewhere just so they could protect themselves, and me. It was sort of a mutually beneficial thing."

To the disappointment of Smith and many of his colleagues, many of BioWare's policies had changed for the worse when EA purchased BioWare for $860 million in the fall of 2007. "After EA bought BioWare, the policies on side projects became a lot more strict, so it was harder for me to do my own stuff on the side."

Smith was unwilling to jeopardize his intellectual property. Still, he needed to eat. He stayed the course at EA/BioWare until Mass Effect 3 shipped out in March 2012, when a confluence of events nudged him toward the exit. He'd been with BioWare for seven years, and employees were entitled to a one-year sabbatical at that juncture. More critically, he found EA's policies creatively stifling.

"It seemed to be the right time; all those factors combined to make it the right time to leave. So, in 2012, I left to go indie full-time, and I'm still here."