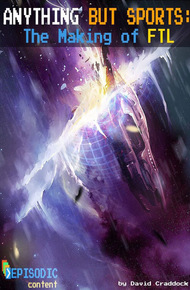 Anything But Sports - The Making of FTL by David L. Craddock

Justin Ma and Matt Davis had it all. They were young, gainfully employed by one of the world's most prolific video-game publishers, and lived in Shanghai, home to cutting-edge tech and multi-billion-dollar corporations. When industry trends stifled their creativity, Ma and Davis broke away from the pack and invested every last hope, dream, and cent into creating a game they wanted to play.

Based on interviews with the developers, Anything But Sports: The Making of FTL tells the story of two men working in the shadow of the big-budget video-game industry to create a unique experience that flies in the face of popular opinion and bottom lines.

"Another 'Singles'-style piece from Craddock, this one focuses on perhaps one of the most interesting indie creation stories of the past few years - how two devs based in Shanghai and already working for a AAA dev made standout procedural game FTL." – Simon Carless

Matt Davis and Justin Ma had kicked off brainstorming sessions in March 2011. By May, Ma had finished his full-time commitments at 2K. The two indies settled into a comfortable routine. Both had apartments in Shanghai separated by a fifteen-minute bike ride, though they rarely met in person. When they needed to talk, they logged on to Google Chat. They split design duties in order to play to their strengths. Davis, the more experienced programmer, would write the code. Ma channeled his knowledge of graphic design to sort out how the game would look.

"The first month was spent probing; researching platforms, debating what sort of language and libraries to use," Ma said. "When I came in, it was not a game yet. It was still a super-mini prototype. The first thing that you could do in the game when I jumped into development was move [crew members] around the ships."

FTL's aesthetic started almost as simple as Rogue's. Instead of representing monsters and items as text characters, Ma used lines to delineate box-shaped rooms from hallways. Colored dots represented disasters like fire and oxygen leaks, and crew members that moved from room to room. The game's visuals stayed simple for much of the early phases of development. There was no point in deciding what the game would look like when neither designer knew what the game itself was supposed to be.

"Way back when, the original design was just an abstract: the high-end goal of us wanting to give the player the feeling of being the captain of a starship," Ma explained. "Understanding what's going on when you see a warning light that designates the shields are down — that was the premise of FTL at the start. Early on, when we were figuring out what the game would be, it was a lot of feeling around, trying to find what's fun, maneuvering, finding other ideas."

Ma and Davis batted concepts around. In one design, tiny crew members had morale and hunger levels that players had to maintain by keeping them busy and personally fulfilled. At certain moments, players could zoom out and control the ship as it voyaged through solar systems and explored alien planets.

It didn't take long for Ma and Davis to scale back. They had decided to tool around with prototypes for a year, or until their savings dried up — whichever came first. Neither scenario seemed able to support a large-scale game. Besides, they had left 2K to get away from bloat. Smaller was better, although settling on a rough scale did not get them any closer to a cohesive design.

Before drifting off to sleep one night, Davis had an epiphany. One of the advantages of Red November — and of most board games — was that the board itself never changed. Only the pieces on the board got shuffled around. Even when the sub was burning and breaking apart, players could take their time and consult their unchanging surroundings.

The ship players piloted in FTL should be static, Davis decided, in terms of how players viewed it. That ship, the Kestrel, would sit in the middle of the screen and face right. Enemy ships would take up the right side of the screen and point up. Lines were used to define rooms of varying sizes so players could see clearly where disasters were occurring within the Kestrel.

"The big turning point where we decided what FTL would become what it became, was when we decided to make the two ship views static," Ma explained. "After that, it was, 'Okay, we sort of know what we want the game to be. We want the game to be entirely focused on the interior of the ship: power management and crew control.'" Both developers reveled in the freedom of being able to vacillate between ideas until they hit on an approach that felt right. "It was a pretty organic process of feeling out what was fun, which is why I wanted to work independently. That sort of agility is not something you can manage when you have to work with marketing and that sort of [bureaucracy]."

Ma and Davis wanted disasters to crop up like weeds. Upon entering a new sector, a random event would take place, such as a sun flare that set the ship aflame. At the same time, an enemy vessel could appear and start blasting away, forcing players to power up and fire the Kestrel's weapons even while they were directing crew to put out fires and repair breaks in the hull to protect their dwindling supply of oxygen.

Keeping the Kestrel afloat required more concentration and mouse-clicking dexterity than simply manipulating crew and firing laser cannons. Ma and Davis drew ideas from another of their favorite games, LucasArts' Star Wars: X-WING, released for the PC in 1993. The game had players pilot iconic X-WING ships and shoot down enemy TIE-fighters. Success hinged on the player's ability to route a limited amount of power between lasers, engines, and shields. For example, power could be diverted from the engines to the lasers, but doing so slowed the craft, making it a more attractive target. Alternatively, players could boost engine power, increasing nimbleness but charging weapons at a slower rate.

Ma and Davis decided to employ power management in FTL for another layer of split-second decision-making. They also conflated the power level and damage status of each vital system. "Justin actually came up with the brilliant design of the power of each system also reflecting the health of the systems," Davis explained. "If they get damaged, they can't be powered as much. He took the power management [concept] that I liked and ran with it, and turned it into something so much cooler."