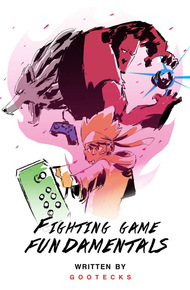 gootecks is a fighting game veteran with years of tournament experience in games like Street Fighter V, Ultra Street Fighter 4, and Street Fighter III: 3rd Strike. He's competed in tournaments around the world including all across the USA, Canada, Japan, Australia, Singapore, and Europe.

Outside the competitive realm, he's also the co-founder of Cross Counter TV, the entertainment network for fighting game fans and the home of the Excellent Adventures of gootecks & Mike Ross, a weekly YouTube series, recently surpassing 150,000 subscribers.

gootecks has a passion for sharing information and training players, recently channeling this energy into Cross Counter Training, a personal training service for fighting game players looking to sharpen their skills. His experience working one-on-one with new players has resulted in his latest eBook for new fighting game players entitled Fighting Game Fundamentals.

His latest project is an interactive video course aimed at beginner and intermediate players called Rise Up in Ranked Matches, available at www.riseupinranked.com

Fighting Game Fundamentals is a guide for beginner and intermediate players designed to provide practical tips and techniques to steadily improve your results in fighting games like Street Fighter V.

Fighting game veteran gootecks shares his philosophy on improving in fighting games, using Ryu and Street Fighter V as a method to better understand the nuances of the game like space control, risk/reward opportunities, frame data, and muscle memory.

By focusing on the fundamentals rather than flashy combos and setups, any player can get the results they're looking for and defeat even their toughest rivals with the right mindset and dedication.

Also included is the Fighting Game Fundamentals Training Mode Handbook, which contains a series of practical exercises that anyone can use to build muscle memory and better understand the systems of the game.

"In our attempts to reach out and find different niches, we ran into this excellent book - Gootecks is known for having over a decade of Street Fighter tournament experience, and this title goes deep into tactics for those who want to start or improve their 2D fighting game skills." – Simon Carless

Street Fighter is often compared to a fast-paced game of rock, paper, scissors because the three main options in Street Fighter are to attack, block, or throw.

The rock, paper, scissors model helps you realize that there is no move or technique that is unbeatable. In fact, there is usually no single correct answer for any move or situation in Street Fighter—just shades of grey and possibilities. Of course, there are exceptions to this rule, but this is a good place to start learning. If you understand this framework, you can use it to better understand why you're winning and losing.

The concept of offense is simple. If you are attacking the opponent and they do not block, they take damage and you score a hit. On the other hand, if they do block, they will either take no permanent damage from a normal attack or a small amount of damage from a special move or Critical Art. The latter is commonly referred to as chip damage.

In theory, you could win if you just blocked everything that your opponent threw at you, right? Not quite, because we haven't considered the third option—throw. Throws are a constant threat when the opponent is near you because they cannot be blocked, they are easy to execute and do a considerable amount of damage and stun to the opponent.

Further, throws generally lose to fast attacks, such as light punches, light kicks, and a number of special moves.

But how do you know what your opponent will do? Your ability to recognize and utilize each of these options in the heat of battle will take time and experience to develop. Of course, you can't just mindlessly use the same option over and over—this makes you predictable. This predictability is what separates beginners from intermediate players. Beginners have only a few attacks in their repertoire and usually have no concept of how these attacks work and how they can be countered.

On the other hand, experienced players observe their opponent's tendencies and patterns and adjust their game to take advantage of the other player's weaknesses. Further, an experienced player has a better understanding of their character's options, as well as those of his opponent's, and can adjust his game to bait the opponent into making mistakes.

For example, if he notices that his opponent never blocks on wake-up and instead mashes buttons or uses risky moves like a Shoryuken, he'd block or stand at a safe range, then punish relentlessly with a high-damage combo.