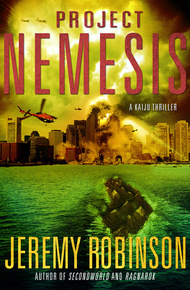 Jeremy Robinson is the bestselling author of more than thirty novels and novellas including Island 731, Secondworld, and the Jack Sigler series including Pulse, Instinct, Threshold and Ragnarok. Robinson is also known as the #1 Amazon.com horror writer, Jeremy Bishop, author of The Sentinel, The Raven and the controversial novel, Torment. His novels have been translated into eleven languages. He lives in New Hampshire with his wife and three children.

Jon Hudson, lead investigator for the Department of Homeland Security's Fusion Center-P, thinks his job is a joke. While other Fusion Centers focus on thwarting terrorist activity, Hudson's division is tasked with handling paranormal threats to national security, of which there have been zero during his years at the DHS. When yet another Sasquatch sighting leads to a research facility disguised as an abandoned Nike missile site in the back woods of Maine, Hudson's job becomes deadly serious.

Hudson and the local Sheriff, Ashley Collins, suddenly find themselves on the run from a ruthless ex-Special Forces security team, but the human threat is short-lived as something very much not-human destroys the facility and heads for civilization, leaving only a single clue behind--a name scrawled in blood: Nemesis. Working with his team at Fusion Center-P, Sheriff Collins and a surly helicopter pilot named Woodstock, Hudson pursues the creature known as Nemesis, attempts to uncover the corporate secrets behind its creation and accidental release and tries to comprehend why several clues lead to a murdered little girl named Maigo.

But as the body-count explodes, along with the monster's size, it quickly becomes clear that nothing short of a full military response can slow Nemesis's progress. Coordinating with every branch of the U.S. military, Hudson simultaneously searches for clues about Nemesis's origins and motivations, and leads the counterattack that will hopefully stop the monster before it reaches Boston and its one million residents.

Witness the birth of a legend as Jeremy Robinson, bestselling author of SecondWorld and Ragnarok, combines the pacing of Matthew Reilly with the mystery of James Rollins and creates the first iconic American Kaiju* story since King Kong. Includes original creature designs by legendary Godzilla artist, Matt Frank.

*Kaiju is Japanese for "strange beast." The genre includes classic monsters such as Godzilla, Gamera, Mothra, Rodan and King Ghidorah.

"This is Creature Double Feature in book form - how could I not include it?"

There’s a foot inside the boot.

Collins lets out a gasp when she sees it. We lean in closer, and I use a stick to lift it up. Leaves cling to the boot, saturated with drying blood. I drop the boot back down and step back when I see a flash of bone.

"A bear wouldn’t have done this," Collins said.

I correct her, saying, "A black bear wouldn’t have done this." I lift my hand and point ahead. "Or that."

Bits and pieces of clothing and flesh litter the forest floor.

"Not sure if this needs to be said, but you have my permission to shoot anything that moves."

Part of me hopes she’ll say we should go while the getting is good. A man has been torn to shreds and discarded through the forest like he was nothing more than the petals of a "love me, love me not" flower. But my revolt and fear are matched by my curiosity and ambition. And it seems the lovely Sheriff Collins has equal parts of both as well.

She frowns. "After you, Hansel."