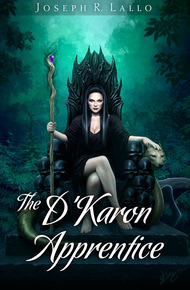 The D'Karon Apprentice is the long awaited sequel to the acclaimed epic fantasy, The Book of Deacon Trilogy. It is a direct follow up to The Battle of Verril.

Joseph's Book of Deacon series is perennially popular, and this fourth adventure returns to a widely-loved cast of characters. The story centres around Myranda, a war orphan with a wizard's powers and a dragon for a friend. We're also given a powerful necromancer for a villainess, because ladies do terrifying, too. – Charlotte E. English