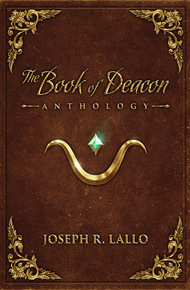 The Book of Deacon Anthology by Joseph R. Lallo

The Book of Deacon Saga is the epic tale of a world besieged by war and at the mercy of dark forces who would see the land and its people wither and die. First Published in 2010, the story has grown significantly, expanding the story into earlier and later eras, exploring the lives of characters both minor and major.

The Book of Deacon Anthology is a collection of all currently published stories in the setting:

The Book of Deacon - The tale of Myranda Celeste, a young woman orphaned by a century long war, and her chance discovery of a fallen soldier's priceless cargo. The find will change her life, sending her on an adventure of soldiers and rebels, wizards and warriors, and beasts both noble and monstrous. Each step will bring her closer to the truth of her potential, of the war, and of the fate of her world.

The Great Convergence - The second in the Book of Deacon series, The Great Convergence continues the tale of young Myranda Celeste. With fresh knowledge of magic and steadfast resolve to see the end of the war that plagues her land, Myranda sets out to find and unite the five fated heroes, the Chosen. Each new warrior brings her world a step closer to peace, but does she have the strength to survive the trials ahead?

The Battle of Verril - In this, the finale of the Book of Deacon Trilogy, Myranda and the Chosen face their greatest challenges yet. Time is running out, and the Generals are growing desperate. Through victory and defeat, reunion and betrayal, neither the heroes nor their foes will rest until they have seen their task through to the end. The only question is, will it be the end of a war, or the end of times?

Jade - This short novel, set after the events of The Book of Deacon, follows the blessed and cursed life of Jade Rinton. Stripped of her family and kept in a tall tower by a fierce dragon due to the scheming of a mysterious stranger, Jade seems to be living in a twisted fairy tale. She soon learns, though, that fate has its own ideas of who should play each part, and that family is where you find it.

The Rise of the Red Shadow - Before he was a legendary assassin and mythic hero, the creature known as Lain was just a simple malthrope, frightened and alone. The Rise of the Red Shadow tells the story of his tragic youth, beginning with his days on a plantation in Tressor and following him through the painful tragedies and thrilling trials that would one day lead him to greatness in the pages of The Book of Deacon.

Entwell Origins: Ayna - The story of Ayna, a young fairy who is cruelly taken from her family, yet finds that this tragedy may have given her the opportunity to become more than she'd ever dreamed.

For fans of the series looking to fill in the gaps, or for new readers hoping to gather the whole series, The Book of Deacon Anthology is a great way to catch up on the whole saga. Each book is updated with improved formatting, as well as a brief foreword by Joseph R. Lallo, and even a message from the mysterious curator who collected the stories. Read it now and be ready for The D'Karon Apprentice, a new Book of Deacon story released November 12th, 2015.

A Message from the Curator

Greetings, reader. If you are reading this, you may already be familiar with a man by the name of Deacon. If not, you shall soon learn of him, as this collection bears his name with good reason. Though he is not without his flaws, the man has been tireless in his chronicling of what he rightly identified as the most important moments of his times. Through his efforts both mundane and mystical he has dredged up endless information that would have otherwise been lost to the ages. This is by no measure the whole of his writings, which reach far beyond the lifetime and perception of any normal man. However, some years ago it struck me that as comprehensive as his record has become, it has also become untenably diffuse. Beyond the books which he himself keeps and guards, tomes I have come to call The Memoire and The Grimoire, the written histories he's worked so hard to assemble have become exceedingly difficult to find. They have followed him to places which others cannot go, and thus might never have been seen by the greater world he has so fervently served. He would be the first to observe that such an outcome is precisely the opposite of his intention in creating these records. And so, it has fallen to me to gather them.

Who I am is inconsequential. You have read of me, or will read of me, in the pages that follow. I am privy to all Deacon has seen and much he has not. We have what I am comfortable calling a mutual respect. It is out of that respect that I have begun to gather his key records. Admittedly, my selections may seem haphazard. The same can be said of their ordering. Both Deacon and I share, among other things, a distinctive relationship with chronology that has led us to think in ways far less linear than most.

Those already familiar with the tales, on the other hand, may be curious how exactly each tale fits into the flow of time. As such, for your benefit, I shall below arrange them into an informal ordering I've developed to help one understand their place in the grander scheme. All years are measured from a point in time that shaped the world irrevocably, the beginning of The Perpetual War.

This era is so named because it was during these years that a being known as The Red Shadow was shaped into the figure he would be when fate called upon him to make his greatest contribution. It begins with his birth, an event which occurred just days before the Perpetual War began.

The Rise of the Red Shadow

This era begins with the moment fate saw fit to begin making its selections of what warriors would rise to its defense in its greatest time of need.

The Book of Deacon

A dark time in the history of the world, its exact start and end at best uncertain and at worst unknowable. During this time the people of the world grew distrustful of the teachings of old and allowed themselves to slip into darkness.

The Stump and the Spire

I hope this information has been enlightening, and likewise do I hope that the lessons of the pages below do not fall upon deaf ears. A world is shaped by the scars of its mistakes, and though those scars are necessary and proper, there is nothing to be gained by blindly repeating those same mistakes. Read, learn, and enjoy. It may well keep you and your children from facing the same trials that very nearly brought a noble world to ruin.