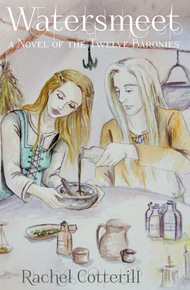 Rachel Cotterill is a computer scientist who collects new skills the way other people collect stamps, from dry stone walling and rope-splicing, to sugarcraft and quilting. She lives in the picturesque Cotswold countryside, where she can usually be found hiking or running in the hills. Watersmeet is her third novel.

When a stranger tells her she's a mage, Ailith is intrigued but she's also afraid. Magic is heresy, and heresy means death under the Temple Law. Even literacy is suspect in a girl of her background, and her sister's impending wedding only serves as a reminder that she should be focusing on her future. Then a local priest asks her to rescue his son, and she starts to wonder if her talents could be a blessing, after all.

The Lord Baron of Watersmeet, Leofwin isn't accustomed to welcoming uninvited visitors. A commoner turning up at his gates should be no more than a minor footnote to his day, but something about Ailith catches his attention. Alchemy can be lonely work and an apprentice might be just what he needs.

As their lessons grow into shared experiments, Leofwin wonders if he might even trust her with his greatest challenge. But Ailith can't forget why she came to the castle.

I read Watersmeet before it was published, and loved it. Ailith is a heroine to remember: smart, curious and impossible to push around. She's brave and dauntless and gentle besides, a combination I found refreshing and compelling. This is a slow, thoughtful story, about alchemy and mystery and romance and war. – Charlotte E. English

Ailith turned in surprise to the old man who had come up behind her in the barn. He wasn't anyone she recognised, and she thought she knew everyone in Bracklea, at least by sight. Meeting a stranger at her grandparents' farm was particularly unlikely.

"You must be so pleased," he went on.

"I know your family," the man said, kissing the back of her hand despite the remaining flour. "Although it has been some time since I paid a visit, and I haven't seen you or Aidith since you were both knee-high. My name is Malachi."

"Pleased to meet you." Unsure what else she should say, Ailith turned her attention back to the stores.

"I dare say you've an eye open for potential matches of your own. A feast like this should be a perfect opportunity — you mustn't be shy."

Ailith nodded mutely. There was nothing to be achieved by arguing with a stranger; he couldn't know that most of the town's eligible men had rejected her already.

"No?" He raised an eyebrow. "Could it be that a girl of your age has something on her mind more important than marriage? That would be a novelty."

"Naturally. But in the meantime…"

She shook her head. "It's nothing. I haven't much luck, that's all."

"Ah, well, it will come at the right time. Now, your grandmother said I might find some willowherb out here," he said. "I hoped you could point me in the right direction."

"I didn't think she kept any," Ailith said. "It grows so well it's a pest, in the fields, so you can always find some when you need it. But she's got racks of herbs over here… hang on, I'll have a look."

Ailith turned to the shelves behind her, where Nana kept her ingredients in a row of mismatched pots, and glanced over the faded labels. She didn't think she would find any, but there was a small brown jar at the front of the shelf: the writing was difficult to decipher, slanted and spidery, but if it didn't say 'willowherb' then there must be something of an uncannily similar name.

"Here," she said, picking it up. "Is there anything else you need?"

He took the jar, and placed it gently down on a nearby surface.

"Thank you," he said, a strange smile playing on his lips. "That was what I wanted."

"It's unusual to find a young woman who can read. Who taught you letters?"

She blushed, ashamed to have been caught out so easily. "Nana showed me."