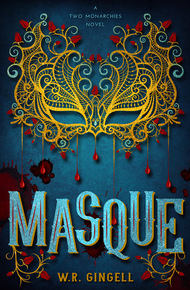 Beauty met the Beast and there was . . . Bloody murder?

It's the Annual Ambassadorial Ball in Glause, and Lady Isabella Farrah, the daughter of New Civet's Ambassador, is feeling pleasantly scintillated.

In the library is Lord Pecus, a charming gentleman whose double mask hides a beastly face, and who has decided that Isabella is the very person to break the Pecus curse. In the ball-room is young Lord Topher, who is rapidly falling in love with an older woman. And in the card-room, lying in a pool of his own blood, is the body of one of Isabella's oldest friends: Raoul, Civet's Head Guardsman. The papers sewn into his sash seem to suggest espionage gone wrong, but Isabella is not so certain.

Will Isabella find the murderer before Lord Pecus does, or will she end her investigation as a bloody spatter on the parlour floor?

Lady Isabella Farrah awed me from the first page. She's bright, she's dauntless, and she's fabulously fun to spend time with. I'd secretly like to be her. Pitted against a killer and with a gruesome mystery to solve, it's absolutely no contest - no one can hold out against Isabella for long. – Charlotte E. English

I settled in a solid wooden chair while Ciara, a stick in her charcoal-blackened fingers, drew a circle around me in the dirt floor.

I merely nodded. I wanted to be well begun by the time Lord Pecus arrived. Ciara took my nod as assent, and began swiftly drawing figures about the circle. She had got halfway through the circle when her head snapped around to the door enquiringly; and I realised, with a slight quickening of breath, that she must have sensed Lord Pecus. Oh good! He was too late.

She threw me a look of burning anger, and said evenly: "Why is Lord Pecus pursuing you?"

No 'my lady' there, I thought, biting back a smile that would not have been helpful.

"I imagine he doesn't want me tracking the murderer," I told her. "He seems to be quite proprietary about these things."

I gave her a brief half-smile by way of apology. "Raoul was my friend."

She drew around me in angry silence until the door slammed open with a soggy pop, and swift male footsteps declared the entrance of Lord Pecus. He had to duck his head to walk the length of the hallway, and straightened only when he reached us in the main room, the ceiling of which was marginally higher. He wore a hood that confused his face—magically, I assumed, with a certain amount of respect—but as he entered, he pulled it back to display his maskless face. Ciara hissed, and my brows rose: Lord Pecus was trying to intimidate me.

"Lady Farrah, are you trying to make me regret my decision that you are not a viable suspect?" he asked tersely, without acknowledging Ciara by more than a nod. Ah, so they knew each other, did they?

"Not at all, my Lord," I said politely. More bear than wolf, I thought to myself, a little more shaken than I would have liked to admit. "I believe, in fact, that I am doing a public service. Careful! You'll smudge the lines."

He abruptly halted, looking down, and took a step back. "Ciara, stop the spell."

"You know I can't," Ciara said through her teeth, and the look she shot me was pure poison. She drew steadily as she talked, completing a final circle, and straightened. "She tricked me, my Lord."

"I have no doubt," Lord Pecus said dryly. I fancied I saw a gleam of amusement in those green eyes.

Emboldened, I said: "It wouldn't have been fair to ask anyone else to do it. Besides, if you had simply done this after Raoul, I wouldn't have had to be sneaky about it."

There was an instant of pause, and then Lord Pecus said: "It was more important to gather the physical evidence at the time, and I didn't have time to run the spell on myself."

"I also touched Raoul– which, my lord, was the point I was trying to make. I had no evidence to gather. The thread only faded this afternoon."

"It's a dangerous procedure, Lady Farrah."

"All the more reason not to expose someone who hasn't already been exposed," I said cheerfully.

Lord Pecus opened his mouth and closed it again with something of a grunt. "My sergeant wants me to have you arraigned for tampering with evidence. He doesn't like having his crime scenes interfered with."

"I imagine he would have liked even less to come upon the scene with a lady in strong hysterics," I said. Lord Pecus was now grasping at straws.