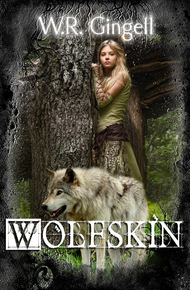 'If you want adventure, you have to march right up to it and kick it in the shins…'

At fourteen, barefoot and running wild, Rose is delighted to be apprenticed to Akiva, the witch of the forest. She thinks it will be all enchantment and excitement, and not so much fuss about baths. The reality is much more sober and practical- that is, until she meets a mysterious wolf in the forest and is tricked into stepping off the path…

In young, naive Rose, Bastian sees a way of escape. Cursed to remain in the shape of a wolf after running afoul of a powerful enchantress, he has lived many decades under a spell, and now he is both desperate and ruthless. But by breaking part of Bastian's curse, Rose has caught the attention of Cassandra, the enchantress who cursed him: and Cassandra is by no means ready to forgive and forget.

Meanwhile, wardens have been disappearing from the forest, one by one. Rose is certain that Cassandra is behind the disappearances, but can she and Bastian get to the bottom of the matter before Akiva disappears as well? And are Bastian's motives entirely to be trusted?

Sometimes the little girl in the red hood doesn't get eaten, and sometimes the wolf isn't the most frightening thing in the forest.

This book is full of delightful whimsy. Young witch-in-training, Rose, takes the peculiarities of her forest home in stride, and sails through peril and adventure with grand enthusiasm. The big bad wolf is no match for the little witch! – Charlotte E. English

Bastian threw himself down on the grass and stretched out. "Time we have. Go ahead."

"I'm tired now," I said, in the mood to be contrary. "Tell me who put the curse on you instead."

"Who is not as interesting as how," he countered, looking lazily up at me. I think he was trying to change the subject. Then he seemed to relent, and added: "I fell in love with an enchantress."

"She put a spell on you because you fell in love with her?" The question came out unexpectedly like an accusation, and to my surprise, a tinge of red came to Bastian's cheeks.

"Human bodies!" Bastian said in exasperation. "I must be out of practice. Very well, little witch; I did court an enchantress."

"And?" Again there was a touch of red in Bastian's cheeks.

"And two other women," he admitted.

"You were courting two other women at the same time?"

"I'm not going to court anyone," I told him. "I'm going to be a pirate, and pirates don't marry."

"Is that so? Obviously I should have come to you for advice, but it seemed a little late for celibate piracy by the time Cassandra was pointing her finger at me."

I frowned and sat down, crossing my legs, and returned to the point of contention. "Why were you courting three women at once?"

"My dear child, three women is the minimum requirement for happiness: one never finds the qualities one requires in any less than three, much less in one woman."

"It serves you right," I said. I disliked the smooth undertone of arrogance in his voice.

Bastian was startled. "I beg your pardon?"

"It serves you right. If someone did that to Gwendolen I'd curse him, too. If I could."

"I'd shrug and move on," interrupted Bastian.

"You wouldn't; you'd try your best to make her fall in love with you really and truly," I argued, realising as I said it that it was true. It was exactly what Bastian would do. I took advantage of his unusual silence to continue. "If a girl treats a man false he can go away and travel, and forget. Women have to sit at home and remember through every chore and moment that when he said this it was a lie, and when he said that it was in order to get something. There's no getting away from yourself and all the people who know you've been made a fool of."

Bastian cupped his hands behind his head and eyed me balefully. "And what do you know about it? Who broke your youthful heart?"

"No one, and I do know. When Father died Mother was never the same again, and it was better for her, because she knew he'd always been faithful. When you sit there longing for someone and then remembering that they're not worth longing for, it's worse."

He gave a derisive snarl. "Saccharine. Poppycock. No woman is worth that amount of soul-searching."

"You're embittered and old," I said excusingly, watching with interest the coughing fit that came over him. "Gwendolen says that often happens to men in middle age."

"Middle age!" gasped Bastian, sitting up to catch his breath.

"When you get middle-aged and embittered you need someone to care for, Gwendolen says. Mother had me and Gwen to look after. It seemed to take her mind off things."

"I'm not surprised," Bastian retorted sourly, recovering himself. "You would have been a horrible little handful. In fact, I imagine you were much the same as you are now."