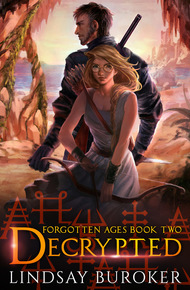 Fantasy and science-fiction author Lindsay Buroker has early memories of convincing childhood friends, pets, and stuffed animals to play the roles of characters in her worlds, so it's safe to say she's been making up stories for a long time.

She self-published her first novel, The Emperor's Edge, in December of 2010 and has written and published more than 60 novels since then, most under her own name, but a few steamier ones under a pen name. By mid-2012, she was doing well enough to quit the day job and become a full-time author.

She grew up in the Seattle area but has itchy feet and has moved several times and also served for four years in the army. She recently moved from Arizona to Bend, Oregon, where she and her dogs now have eighty acres to roam around on. Someday, she'll even have a house on that land!

The Heritage of Power series is a spinoff of her USA Today best-selling Dragon Blood series but introduces new heroes and can be picked up by new readers.

Tikaya's a favourite of mine, because she's the kind of woman I rarely meet in fiction. She's neither a warrior nor a beauty, but her intellect is second to none, and there's no one to equal her for languages - and cryptography. It's fun to watch what academics do when dropped into adventure, and Tikaya's so easy to root for. – Charlotte E. English